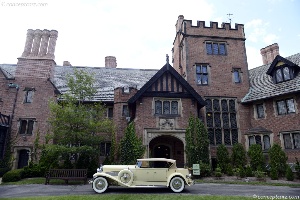 September 2014
The inaugural Concours d'Elegance at Stan Hywet Hall & Gardens was help on September 21st, 2014. The event was organized by many of the individuals who had made the Glenmoor Gathering of Significant vehicle, led by Executive Director and car Selection Chairman David W. Schultz, a success for 18 years. Mr. Shultz was also this year's Chief Judge at the Amelia Island Concours d'Elegance and has served as the president of the Classic Car Club of America. The Glenmoor Concours came to an end in 2012 due to 'simple economics' as described by Myron Vernis, the general manager of the Glenmoor Country Club. Without a venue, the team went exploring for a location that could be a worthy backdrop to the world-class vehicles that had made the Glenmoor Gathering a success. What they found was the Stan Hywet Hall & Gardens, located in Akron, Ohio.

The Stan Hywet Hall & Gardens
F.A. Seiberling founded the Goodyear Tire & Rubber Company in 1898, naming it after Charles Goodyear, the inventor of the vulcanization process for rubber. As the Industrial Revolution was transforming the very fabric of our nation during the turn of the 20th century, the entrepreneurial spirit of innovators and visionaries like F.A. Seiberling flourished. The Goodyear Tire & Rubber Company soon became the world's largest rubber company and Akron became the 'Rubber Capital of the World.'

As Seiberling's fortune continued to grow, as did his family, more space was needed. The answer was Stan Hywet Hall, which was constructed between 1912 and 1915, and is one of the finest examples of the American Country Estate movement. Stan Hywet, is Old English for stone quarry, the property's most prominent natural feature when the land was purchased.

In 1957, the Seiberling heirs gifted this estate to the people of Akron.

The Concours
The organizers of the event were able to match the Stan Hywet's beauty and attract a brilliant selection of elegant vintage automobiles, motorcycles, and bicycles. The well qualified and talented group of judges was led by Chief Judge, Dr. Paul F. Sable, who has judged at every major U.S. concours, including Pebble Beach, Amelia Island and St. Johns. The founder and director of the Amelia Island Concours, Mr. Bill Warner, was also a judge, as were many curators of museums, national automobile clubs, and industry professionals.

The Vehicles
The Concours included traditional classes with American and foreign automobiles from several eras as well as some featured classes. Along with the Brass Era, Pre- and Post-war Classics, and Sports Cars classes, special groups were reserved for Pierce-Arrow, Cord, Duesenberg, Ford Thunderbird, Packard Darrin, and Woodies. The Ford Thunderbird class, for years 1955 through 1957, had nearly a dozen examples on display, including a very nicely customized example. The Cord category was for L29 and 810/812 models. The Cord L-29 was one of two front wheel drive cars introduced in 1929 and is certainly the best remembered. The other - Ruxton - was short-lived. The Cord 810/812 models of 1936 and 1937 have been described as some of the most visually striking cars of all time, and were the most mechanically advanced of their day. They were also the last products of an under-funded company scrambling to survive The Great Depression. In the end, stunning design and innovative engineering could not overcome production delays, mechanical bugs and the declining market for cars in the Cord's price range. Auburn Automobile Company, the Cord's parent, filed for bankruptcy in December 1937.

The most elegant Cord at Stan Hywet, as nominated by the judges, was the 1937 Cord 812 Phaeton owned by Al Pilz of Ligonier, PA. It was sold new in Toronto, ending up in Washington State where it was acquired by the current owner, who restored it over a 39-year period. It has twice received the Auburn-Cord Duesenberg Club's Gordon Buehrig award, as well as top awards at other automotive concours d'elegance.

In 2011, the Glenmoor Gathering had a well curated class labeled 'The Cars of Howard 'Dutch' Darrin.' The inaugural Stan Hywet Concours also had a Packard Darrin class, this one was equally impressive, with the majority of the cars coming from two private collections. There were 12 1939 Packard Darrin models produced in Hollywood, CA, by Howard 'Dutch' Darrin. 'Dutch' convinced Packard to offer the Darrin models on a special-order basis in the 1940s. The first cars were essentially one-off, custom built cars. The first versions were built in Hollywood, California before production moved to Connersville, Indiana, where the rest of the Darrin-designed Packards were built. Several body styles were eventually available. The Darrin-designed Packard were favorites of celebrities and film starts.

Arguably the most significant display were the Pierce-Arrows, which had over a dozen examples, sitting side-by-side, from the early production years through the mid-1930s. The Pierce-Arrow Company had been launched in 1901 and by the late 1920s was experiencing financial difficulties in a changing marketplace. The company merged with Studebaker in 1928 and the results showed up in improved mechanics and styling. The merger had its benefits but by 1931, sales were in decline, as was the entire American luxury automobile market. By 1933, Pierce-Arrow was back in private hands. Nevertheless, Pierce-Arrow continued to offer high quality motorcars. For 1932, the company introduced a V-12 motor in addition to its in-line eight.

The Best of Class winner in the Duesenberg category was also the winner of the coveted Best of Show. Joseph and Margie Cassini of West Orange, NJ brought their 1931 Duesenberg Model J Tourster by Derham which the judges agreed was the most elegant and deserving vehicle at the Stan Hywet Concours. The car has its original body, chassis, engine and other major components. It has SC-specification external exhaust pipes, a wind-up rear windshield, deletion of the rear side vents, and an exhaust system dump which was operated by the flip of a lever on the floor. The exhaust-dump system was a rare option; it bypasses the exhaust system and redirects the airflow through a three-inch open pipe. It is one of eight Derham Toursters designed by Gordon Buehrig.

The People's Choice Award was given to the 1956 Continental Mark II convertible by Hess & Eisenhardt owned by Barry Wolk of Farmington Hills, MI.

Though many were sad the Glenmoor Gathering came to an end, the Stan Hywet stands alone as a distinctive and compelling host venue to celebrate rare, iconic and unique automobiles.
Galleries
Brass Era: Through 1910