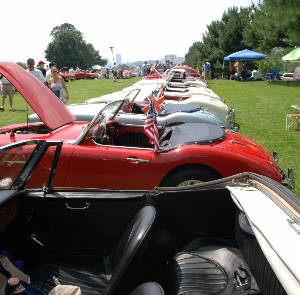 September 2006
Sir William Lyons, the founder of Jaguar, would have been pleased with the vast display of Jaguars that were in attendance for this year's Pittsburgh Vintage Grand Prix Car Show at Schenley Park. Truly a display of style and performance.

The Pittsburgh Vintage Grand Prix has been in operation since 1983 and since that time it has evolved from a one-day vintage race to a week-long festival of races, car shows and motorsports activities. The PVGP has become the country's largest vintage racing event and the only one staged on city streets. The Car Show was held on the day prior to the race, the same day as practice and qualifying for the race cars. This year's featured marque was Jaguar. As the 150 race cars were being pushed to their limits during the qualifying and practice sessions, the show cars sat stagnate, basking in the sun and enjoying the attention they were getting from the curious spectators. Though it has rained for a number of prior years during the car show, this year was a break from tradition with sunny skies and hot temperatures.

The largest gathering of Jaguars would probably have been the E-Types, a road-going sports car conceived in 1956 as a replacement for the D-Type. Production lasted until 1975 with 72,520 examples produced. The large V-12 engine is carefully hidden under a long and sculptured bonnet. The 260-plus horsepower was more than enough to carry the vehicle from zero-to-sixty in just over seven seconds with a top-speed of 140 mph being very obtainable.

The most exotic and exclusive of the Jaguars in attendance was the XJ220 that impressed both young and old. It is one of the few supercars to house a six-cylinder engine. With the help of twin-turbochargers and exceptional engineering the vehicle produces around 550 horsepower. Top speed was reported to be in the neighborhood of 220 mph, making the name 'XJ220' rather appropriate. Production lasted only a short time with 350 units being produced.

A ring of Jaguar XK120, Xk140, and XK150 were aligned side-by-side. When introduced in late 1948, the XK-120 had a top speed of 120 mph making it the fastest standard production car in the world. The introduction of the XK-140 and XK-150 raised that top speed even further. The curvy and sensual bodies were a salute to the design of the 1930's and 1940's such as the 'French Curves' of Bugatti and Delahaye.

Though Jaguar took center stage, it was flanked by large gatherings of other car clubs such as MG, Triumph, Austin Healey, Mercedes-Benz, BMW, Volkswagen, and Porsche. The groups were segregated to various sections of the park but within close proximity to each other. The German built Volkswagen, BMW, Mercedes-Benz, and Porsche groups were located side-by-side. They may have come from the same country but that is where the similarities end. Ferrari, Citroen, and Fiat were in a group of their own. This was a gathering of nationality and coachbuilder. On the side of many of these vehicles could be seen 'Bertone' and 'Pininfarina', the designers and builders of the body. At the top of the hill were the British marques such as TVR, Lotus, Caterham, Rolls-Royce, Bentley, Austin Healey, Triumph and MG. The elegant coachwork and stately bodies of the Rolls-Royce and Bentley's towered over the nimble but capable Lotus, Caterham and TVR vehicles.

Though the import cars were in full force, the American vehicles were also in attendance. They were given their own spacious spot divided by a road but still a part of the Schenley Golf Course. Corvettes, Mustangs, and GTO were some of the larger clubs in attendance. Vehicles of all makes, models, and eras showed up in solute and support of the Vintage Grand Prix.

Bringing a vintage car to the event showed support for the Vintage Grand Prix and the charities they support. It also allowed the owner a prime parking spot that was in close proximity to the racing activities.

If visiting as a spectator, there is a good amount of walking involved throughout the steep and hilly Schenley Park. For many, the car show is a social event as owners stay close to their vehicles, seeking out those interested in talking about their pride-and-joy. Since this is also the main gathering for many car clubs, it is a great opportunity for old friends to 'catch-up.' Though this is not a 'judged event' many car clubs often judge the vehicles within their groups. Awards vary, such as 'most unique', 'furthest traveled', 'best rims' and more. It is an extra incentive that seems to inspire many members to attend.

Vendors set up, selling items ranging from food to car equipment. Since this is a free event there is no need to buy food. A tent at the top of the hill graciously hands out food and drink for free. Donations are requested which benefit the charities associated with the event. If one does not want to venture to the top of Schenley Park, the conveniently placed food vendors provide an excellent alternative.

Seeing an MG, Triumph, or Austin Healey on the road is something special. Seeing hundreds of them aligned side-by-side is truly remarkable. To a spectator, it is understandable that some of the uniqueness of the vehicle may be lost when placed next to others of the same year, configuration, and color.

There were a few Pre-WWII cars on hand. These included Packards, Mercer, and Franklins. A few of the more interesting cars of the day were the wide-body Corvette and the Dodge Concept Pace Car. The wide-body Corvettes were created in limited numbers and designed specifically for racing, making appearances on racing circuits such as Le Mans and Sebring. The aerodynamic bodies and the 750-plus horsepower engine made the vehicle a formidable contender wherever it went. The Dodge Concept was used as a pace car for the 1981 PPG Indy Car World Series. It is nothing short of exotic with its gullwing doors, low stance, covered rear wheels, rear wing, Recaro seats, competition harness, and roll cage.

Muscle cars, vintage cars, super cars, antique/brass era cars, luxury cars, micro cars, racing cars, military vehicles, sports cars, gran turismo's, and more were all at the event. This one-day car show event heightens the appeal for the main attraction - the Vintage Grand Prix. It is one of the largest gatherings of car clubs, car lovers, admirers, and enthusiasts in the country. Plus it is free with all donations going to charities.

The PVGP is truly a unique event on a course that is one of the most exciting and challenging around. Racers traverse the 2.33 miles of twisting roads through Pittsburgh's Schenley Park. This makes it the only vintage car race in the nation that is held exclusively on city streets. There are five 180-degree hairpin turns along with nine other turns. The final quarter-mile stretch that leads to the finish line is straight.

The event is made possible by the all-volunteer Pittsburgh Vintage Grand Prix Association and sanctioned by the Vintage Sports Car Club of America. It serves as a community event and fund raising project for the Autism Society of Pittsburgh and the Allegheny Valley School, an organization serving children and adults with mental retardation and physical handicaps.
Galleries
Acura 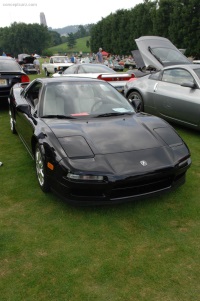 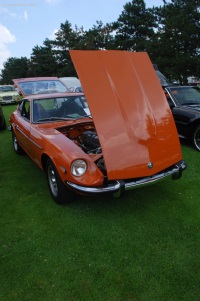 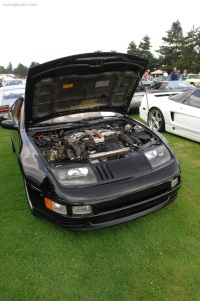 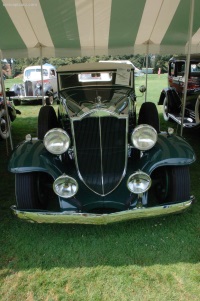