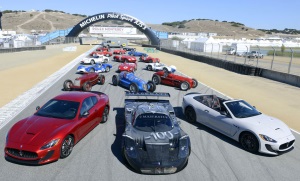 August 2014
The Rolex Monterey Motorsports Reunion, the 'museum in motion', has become a cornerstone of Monterey's annual Classic Car Week. This year was the 40th anniversary of the annual event, with 550 historically- and period-correct racing cars competed over four days within 15 different race groups. The featured celebration were the Maserati centennial celebration and the 50th anniversary of the Ford Mustang. For its 40th year, the Rolex Monterey Motorsports Reunion once again proved to be one of the world's premier historic racing events and a centerpiece of the Monterey Classic Car Week.

'Many different shapes and sizes' could be considered the theme for most of the racing groups. Every group showed ingenuity in mechanical prowess and aesthetic design, and gave a glimpse into the evolution of motorsports. With so many different racing categories spread over several days, there are racing groups to satisfy many different racing addictions. Group 1A housed pre-1940 cars, with the earliest being a 1911 National 40. This was a very diverse group of cars, from foreign to domestic, and from a 4 door Lagonda 2 Litre Speed Touring car to a 3 wheeled Morgan Super Aero. The fastest car in this group was the 1929 Bentley 4.5-Liter LeMans driven by Bruce McCaw. Richard Jeffery came in second with his 1936 Triumph Special 9; his best lap time was a second faster than McCaws best lap, which made for some very spirited racing. Jeffery's fastest lap average was 54 mph, which was much different than the speeds seen in other groups, such as the CanAM cars, which had several cars averaging speeds of over 90 mph. The fastest car in this group was the ex-John Follmer Shadow DN4 driven by Craig Bennett. Sharing similar decibel levels were the TransAM cars which was overrun by Chevy Camaros and Ford Mustangs. Three AMC Javelins, a Ford Falcon, Dodge Challenger, a Pontiac Firebird, and two Mercury Cougars made up the remained of the 41 car field. Although the Mustangs and Camaro's were mighty in numbers, it was an AMC Javelin driven by Ken Epsman which finished in first place. He was followed by 3 Mustang Boss 302's taking the next three spots, followed by 4 Chevy Camaros taking 5th - 8th place.

On and Off the Track
The legends of motorsport is not solely reserved for the track, as many legendary drivers were often seen throughout the reunion, some racing while others were spectating. Sir Stirling Moss, one of the sport's greatest drivers and most recognizable names, made a stir as an honored guest. 'It's wonderful to come to events like the Rolex Monterey Motorsports Reunion and be surrounded by like-minded people,' said Moss, who retired from racing (vintage cars) when he was 83 and turns 85 in September. 'There are many people here who weren't even born when I stopped racing (professionally), yet they are so polite and respectful; it makes me feel very good.' Moss and recently retired Scottish driver Allan McNish (three-time winner of the 24 Hours of Le Mans, most recently in 2013) entertained enthusiasts at a lunch break 'picnic', telling stories and taking questions from the audience.

Maserati Centennial Celebration
This year's Monterey Motorsports Reunion celebrated the 100th anniversary of Maserati with a special display in front of the Rolex Driver's Club. The display featured a new MC12 competition car with a special livery, along with many classic models from the company's past. Maserati's also took to the track, competing in several classes. Most of the Maseratis could be found in the 1950s and early 1960s sports car category, which included no fewer than three Tipo 61 Birdcages, two 300Ss and a 450S Maserati. The Maserati 300S owned by Jon Shirley was driven at this year's event by legendary racing driver Derek Bell, who won Le Mans five times, the World Sportscar Championship twice and the Rolex 24 Hours of Daytona three times.

'Maserati is a definition of not only luxury road cars, but some of the most remarkable sports cars and Grand Prix cars ever constructed,' says Gill Campbell, CEO and general manager of Mazda Raceway Laguna Seca. 'Additionally, it is the 60th anniversary of the sleek Maserati 250F that first competed in the 1954 Formula One season with Juan Manuel Fangio and Sir Stirling Moss dueling behind the wheels of their respective 250Fs.'

'Maserati is celebrating its anniversary at key venues around the world, and the Rolex Monterey Motorsports Reunion in Monterey is unquestionably one of the highlights on the international calendar,' says Peter Grady, President and CEO of Maserati North America, Inc. 'We look forward to showcasing the modern Maserati in the context of a heritage of century of building inspired automobiles that break the norm and define 'The Absolute Opposite of Ordinary.''

In 1926, Maserati produced its first car - a race car named Tipo 26. It made its debut in the 1926 Targa Florio which it won, the first of many wins for the company, which later included victories at the Indianapolis 500, 9 wins in Formula One and the 1957 F1 World Championship.

2015 Edition
The 2015 Edition of the Rolex Monterey Rolex Monterey Motorsports Reunion will Celebrate the 50th Anniversary of Shelby GT350 Mustang, one of the most recognizable road racing cars of the 1960s. 'The immediate success of the Shelby GT350 helped catapult the entire Mustang program onto the worldwide stage through its pure performance and reliability,' said Gill Campbell, CEO/general manager of Mazda Raceway Laguna Seca. 'We're thrilled to honor such an iconic American racing brand at the Rolex Monterey Motorsports Reunion. We are also adding a special 1965-1972 Shelby GT350 Mustang race group to the schedule as a way to further highlight the marque.'
Galleries
Sports Racing and Touring Cars Pre-1940