The Quail: A Motorsports Gathering 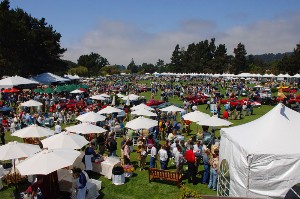 October 2006
In its fourth year, The Quail: A Motorsports Gathering takes place during the hectic Pebble Beach Concours weekend. With many automotive activities happening during this time, the Quail has built a reputation for being one of the most exclusive and intimate automotive events of the weekend. Located on the golf course of the Quail Lodge, the Quail features rare motorsport automobiles, fine wines, and a peaceful atmosphere. A limited number of selected entrants are permitted to grace the show field; the number of those in attendance is limited to just 3000, with the tickets selling rather quickly. Though the $150 may appear to be rather steep for just an entry-fee, there is much that goes along with it. The ticket includes a lunch prepared by the chefs of the Lodge, wine tasting, collectible poster and magazine, access to the Bonhams & Butterfields auction, and test drives in Land Rovers and Bentley's. There were four themed regions of food, each presented with appropriate accompanying music and wine. The regions were Little Italy, Greek Delights, Flavors of Spain, and The California Farmer's Market.

There were three main themes honored this year that included the coachwork of Zagato, 100th anniversary of the Targa Florio, and Laguna Seca's 50th anniversary.

History of Targa Florio, Laguna Seca, and Zagato
The Targa Florio was created by Vincenzo Florio and began in 1906 near Palermo, Sicily. It continued until 1977 when it was canceled due to safety concerns. Up to that point it held the title of the oldest sports car racing event in the world and one of the most difficult open road endurance automobile races. The first race covered 277 miles through terrain that included steep hills, curvy mountains, and several climate changes. The inaugural race was won by Alessandro Cagno after nine hours. As the years continued the course was changed various times in an effort to improve safety and make the race more enjoyable for spectators.

The second honored racing event was Laguna Seca which turned 50 this year. It was built in 1957 near Monterey, California and now is 2.24 miles long with eleven turns including the infamous 'corkscrew' through turns 8 and 8A. It has 300 feet of elevation changes which challenges both driver and vehicle. The first race was held in November of 1957 with Pete Lovely in a Ferrari emerging victorious. Since that time it has been the host to automobile and motorcycle races including Formula 5000, Trans-Am, Can AM, USRRC, Champ Car, AMA, MotoGP, Monterey Historic Automobile Races, and more. As the years have passed and vehicles evolved, so has the track. It has been updated to meet safety requirements and to comply with racing sanctioning bodies.

Zagato was this year's honored Carrozzeria (coachbuilder) and featured some of the greatest and most memorable creations during their illustrious and on-going career. At the close of World War I, Ugo Zagato integrated his knowledge of aircrafts into automobiles. His design and creations became legendary for their lightweight construction and aerodynamics. The list of clients included such greats as Alfa Romeo, Maserati, Ferrari, Abarth, Aston Martin, Lancia, Fiat, and more. Some of the most influential race cars and prominent vehicles were designed and built by Zagato. Many of the cars featured the signature 'Zagato double-bubble' roof top, which had originally been designed to add additional room for its occupants since the height of the car tended to be rather low. Soon, it became their unmistakable trademark. The designs were innovative, creative, memorable, streamlined, and efficient.

This year's Quail event paid tribute to these events and coachbuilder. Organized carefully on the show field, the vehicles paid homage to the past while the 3000 well fed automotive enthusiasts casually strolled around admiring and recognizing the accomplishments of some of the greatest manufactures of all time. There were several examples of vehicles that competed on the treacherous and challenging Targa Florio course. The 1948 Alfa Romeo 6C 2500 SS Competizione on display placed second overall in 1949. The Porsche 906E-159 has been described as 'the most rare, best restored 906 with most race wins.' This Laguna Seca champion is one of four fuel-injected factory long nose 906Es and is referred as a 'long nose short tail.' It won all of the races of the 1967 United States Racing Championship Series and the 1967 SCCA Series. The Zagato tribute began with a 1929 Alfa Romeo and spanned over 70 years to modern designs for Aston Martin and Ferrari.

The Great Ferraris
Some of the greatest and most unique classic vehicles created by the legendary Enzo Ferrari were on display. There were 375 examples of the Ferrari 375 America Speciale created but the one on display was probably the most unique. It featured a vertical grille while all the others were horizontal. The A-pillar is titled forward rather than rearward and is one of the few early Ferrari's to have a sunroof. The 166 SC is assumed to be the oldest Ferrari in existence. The mid-engined Dino cars were the only 'Ferrari' not to carry the Ferrari logos or badges. They were created as a tribute to Enzo Ferrari's son, Dino, who had passed away in 1956 at the age of 24. There were several vehicles that had been owned by the legendary Steve McQueen; one of them was the Ferrari 250 GT Lusso with coachwork by Scaglietti.

The Rest of the Field
The rest of the field was comprised of sports and racing cars that spanned many years. The designs varied greatly; some were elegant with impressive coachwork while others were rudimentary but mechanically impressive in their own respects.

The oldest on the field was the 1912 Isotta Fraschini KM with its very large 700 cubic-inch engine which produced about 100 horsepower and could travel at speeds of 100 mph. The covers of the engine-block had been replaced with glass so the engine's large stroke could be seen in action. Only three were ever created. The 1920 Paige Daytona Racer Special is a one-off creation that set new stock car chassis speed records in the United States from 1921 through 1922. It was sent to Australia where it continued to set new records. The 1932 Daimler Double Six-Sport Saloon is one of only 26 examples created. It is a very large and impressive with a 159.5 inch wheelbase. It has a one-off custom body designed by H.R. Owens of Gurney Nutting and built by Martin Walter. The Jaguar SS 90 is the first true sports car produced by Jaguar. There were only 23 examples produced before the SS 100 was created. The example shown carries chassis #249478 which was the very first SS 90 to be sold into private hands and registered for the road. The Porsche 356 'A' Outlaw was highly modified and intended to compete in the LA Carrera Panamericana. The Triumph Dolomite's is one of only three created. With its supercharged straight-eight engine it is one of the greatest race cars built by Triumph.

Most of the cars were in restored condition but there were a couple of unrestored vehicles that really gave the impression of their age. The leather on the seats had cracks and tears. There was nothing shiny; they were clean but did not sparkle. Rust could be seen throughout the body. Though in unrestored condition they still took one's breath away. Soon, a full body-off restoration will revitalize these vehicles and bring them back to immaculate condition. They are 'a diamond in the rough' and the ultimate 'barn finds'. Their potential is evident and their past is profound.

Most of the entrants were from California with several coming from Hong Kong, by far the furthest commute. Mississippi, Michigan, Texas, Florida, and Nevada were a few of the other US Cities represented at the event.

Awards
The former Steve McQueen Jaguar XK-SS was chosen as this year's 'Best in Show'. The Laguna Seca 50th Anniversary Class winner was the Porsche 906E. The Lancia D24 Sport Spyder was awarded 'Best in Class' for the Targa Florio 100th Anniversary Class. The Ferrari 250 GT Zagato and Triumph Dolomite were also awarded class wins in their respective categories.

Charities
The Quail: A Motorsports Gathering benefited local communities and charities that included the Make-A-Wish Foundation, The California Highway Patrol 11-99 Foundation, The Juvenile Impact Program, Rancho Cielo, and the Friends of Carmel Unified Schools. In 2005 there was $73,900 generated from this one-day event.

Historics to Quail Run
2004 was the first year for the Historics to Quail Run. Cars competing in the Historic Races at Laguna Seca were invited to the Quail Lodge. The invitation was limited to preserve the intimacy and atmosphere of the Concours. In 2004 nearly 20 Ferrari GTOs were escorted to the event by a California Highway Patrol. Last year the invited group was the 1947-1955 Sports Racing cars over 2000cc with nearly 20 vehicles making the journey. This year the invited guests included pre-World War II racers proving that though they may be around 80 years old they are still capable of doing what they were designed to do: be driven.
Galleries
Targa Florio 100th Anniversary

A Tribute To Zagato