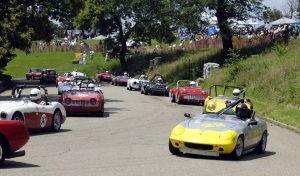 July 2015
Pittsburgh, PA is home to one of the nation's largest vintage race and the only one that is still run on city streets. 150 vintage racers traversed the 2.33 mile, 17 elevation change, 23 turn, circuit through Schenley Park as they negotiated all the hazards that can only be found on an actual city street. The race cars were divided into six different race groups, based on era of production and engine displacement size. Most of cars were small and nimble, and built by Europe Companies such as Triumph, MG, BMW, Porsche, Lotus, Alfa Romeo, Austin Healey, and Jaguar. They were originally designed for small European roads which make them very suitable for the sharp turns and heavy braking that the Schenley Park course demands.

This year had one of the largest spectator turn-outs in the Pittsburgh Vintage Grand Prix's (PVGP) 33 year history, with most selecting the 456 acre Bob O'Connor Golf Course to view the race. The massive expanse of rolling hills is more than adequate for hosting the International Car Show which has over 2,000 vehicles on display and is ranked as one of the largest car shows in the world.

The Grand Prix, the finale of the 10-day event, was precluded by a Kick-Off Rallye, Blacktie & Tailpipes Gala, Historic Racing at Pitt-Race Complex, Invitational Car Show on Walnut Street in Shadyside, Waterfront Car Cruise, a parade through Downtown Pittsburgh, Countryside Tour, and a 'Cars and Guitars' rock concert at Hard Rock Cafe in Station Square.

This year, the PVGP celebrated the 'Marques of Italy', which included Ferrari, Maserati, Fiat, Alfa Romeo, Abarth, Lancia, and Lamborghini (to list a few). Part of the celebration included hosting the Fiat Club America's FreakOut Annual Convention, which drew over 200 Fiats from all over the country.

The Vintage Grand Prix is made possible by an army of over 1,200 volunteers, many of who work year-round in preparation for the event. The event benefits the Autism Society and the Allegheny Valley School, for which it has raised $3.95 million, including a record $360,000 in 2014.
Galleries
Pre-War & Select MG T-Series