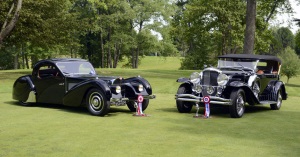 July 2015
The 37th annual Concours d'Elegance of America, established in 1978, celebrated a gathering of 300 significant cars on the beautiful green at the Inn at St. John's. This year, the featured classes included Vintage Bentley, Auto Show '55, Bonneville Streamliners, Cars of Bruce Meyers, Hearses, Bizzarrini, and Dream Cars of the 1980s.

Auto Show '55
The 'Auto Show '55' group celebrated the beginning of the jet age, excessive chrome, tri-tone colors, and high-compression V8 engines. World War II was in the rear view mirror, the Eisenhower economy was beginning to boom, and credit was easily accessible. The market was diverse, offering a stylish alternative for those seeking family-friendly station wagons or flamboyant convertibles. The vehicles were stylish, the future was bright, and sales reach 8.7 million cars and trucks for 1955. That total would not be surpassed until 1965. Claiming 94% of the market share were Detroit's 'Big Three', with General Motors taking the top honors as number-one producer. Sitting side-by-side at this year's event, were nearly a dozen of the finest examples of 1955 vehicles. The list included a Chrysler 300, a Kaiser Manhattan, a Packard Caribbean, and a Studebaker President. The judge's favorite in this group was a 1955 Chevrolet Bel Air owned by Robert Chauvin, followed by the Chrysler C300 owned by W.K. Laird.

Hearses
Perhaps never before seen at a Concours events was the 'Hearse' group. A ride in a hearse, for most of us, is expected to be our last. The early Hearses were often quite elaborate, as demonstrated by the 1893 Cunningham funeral coach built by the Cunningham Coach Company of New York. It was produced for the 1893 Chicago World's Fair at a cost of $12,000, and was purchased by the Blake Funeral Home of Detroit. Currently it is part of the Detroit Historical Society's collection. It was used for funeral processions until 1915.

Motorized hearses began to appear during the first decade of the 20th century. Many of the early motorized hearses were mainly powered by electric motors, as they were quiet, dependable, and easier to start without the hand-cranking required by early internal combustion engines. The exterior coachwork often imitated the designs of horse-drawn carriage hears with very ornate Victorian details such as hand-carved columns and drapery panels. These motorized Hearses were often 2 or 3 times more expensive than a horse-drawn carriage, coupled with the natural conservatism of the funeral industry, meant that horse-drawn and motorized hearses coexisted for quite some time.

This year's concours event brought a great history of Hearses, from the 1893 Cunningham Carriage Hearse to a 1959 Superior-Cadillac Crown Royale Landaulet. Perhaps the most ornate and elegant was the 1916 Winton and built by Crane & Breed, which was the foremost professional coachbuilder of the time. They manufactured and distributed a full line of funerary materials, including coffin nameplates, plumes, undertaker supplies and caskets. It was originally purchased by a livery company in New Jersey. The car was later stored in a horse barn in the mid-1920s. It was eventually purchased by the current owner and treated to an extensive restoration.

Enthusiast of the Year - Bruce Meyer
Automotive collector Bruce Meyer is well known and respected by all in the hobby and the industry. His collection is diverse and vast, from Duesenbergs to dragsters, from Cobras to Corvettes, and from Indians to Indy cars. This year he brought a Shelby Cobra, a Ferrari 625 TRC, a Bugatti Type 57, and a Bentley 4.5 Litre. The Cobra is CSX2001, the first production Shelby Cobra built and among the initial 75 delivered to the dealers in 1962. Although not included in the 'Cars of Bruce Meyers' group, he also brought a 1934 Pierson Brothers Ford Coupe, which was a stunning addition to the 'Bonneville Streamliners' group. From its first outing with the Pierson Brothers in 1949 to Tom Bryant's final run at Bonneville in 1991, this HOT ROD magazine cover car was featured in virtually every performance publication of its day. Its aggressive 9-inch chop, innovative hand-craftsmanship and advanced mechanics made the one-of-a-kind race car a stand-out amongst its peers!

Japanese Sports Car
Japanese sports cars are becoming very collectible and highly sought after. As very few examples were imported into the United States, they are incredibly hard to find. Examples that are in great condition are demanding top dollar at auctions. This year's event brought six spectacular examples, including two Datsuns, a Nissan Fairlady Z432, an Isuzu 117, a Mitsubishi Colt Galant GTO, and a Hino Contessa 1300S. The most elegant, as chosen by the judges, was the 1967.5 Datsun SRL 2000 shown by Shant Saroukhanian. It is considered a 'mid-year' example, making in one of the most desirable. Features include the earlier lighter body and rare optional Solex carburetors. Unencumbered by the forthcoming strict emissions standards, the 1967.5 models are sought after by collectors. It is believed that fewer than 1,000 of the SRL 2000 models were sold in the United States, and fewer than 100 are currently known to exist.

Vintage Bentleys
Early Bentley's served double duty, as they competed in motor sports and in the luxury car segment. Ettore Bugatti referred to the Bentleys sarcastically as 'the fastest lorries in the world.' In comparison to the small, lightweight vehicles that he produced, the Bentley's were larger, heavier and often more powerful; capable of winning races. The company was founded in 1919 by W.O. Bentley who was known for his World War I rotary aero-engines. The company was also well respected for its racing success. In the 1930s, Bentley was at the top of the British sports car market, with only a few competitors - primarily Bugatti and Hispano-Suiza. In 1931, Rolls-Royce acquired Bentley and has been owned by Volkswagen since 1998.

This year's event included several wonderful examples of early Bentleys including the 3-, 4.5-, 6.5-, and 8-liter models. The earlier models, the 3, 4-1/2, and Speed Six built Bentley's reputation primarily on their racing prowess. The 8 Liter was a departure in that it was built primarily as a large luxury car to compete with the Rolls Royce Phantom II. It was available with 144 or 156 inch wheelbases, with 6 cylinder 8 Liter overhead cam engine having 4 valves per cylinder, dual side draft carburetors and twin ignitions producing over 200 horsepower.

The most elegant Bentley on the show field was 1925 Bentley 3 Litre shown by Todd & Peggy Nagler who purchased the car in 1975. It wears a Vanden Plas Tourer body and has been toured extensively on car rallies i the U.S. over the past 40 years.

Best of Show
Two best of shows were awarded, one for 'American' and one for 'Foreign.' The 'American' title went to a 1929 Duesenberg Model J Dual Cowl Phaeton by Murphy shown by Charles E. Letts, Jr. Murphy was a popular choice for Duesenberg owners, and the car owned by the Letts is one of only three Dual Cowl Murphy-bodied Phaetons. Duesenbergs were built between 1913 and 1937, and they were some of the most luxurious and innovative cars of their time. The Model J Duesenberg was regarded as the most outstanding motor car of the day; the chassis alone cost $8,500. It was by far the most expensive car in America. Depending on the coachwork, the price could reach $20,000; A staggering sum at a time when a new family car cost around $500.

It was completed on July 23, 1937, finished in black with pigskin upholstery. It has received a comprehensive restoration, with several items returned to original. It was the 'Best of Show' at Pebble Beach in 1976, and has a well-documented history from new. It is, without question, the very definition of art in motion.

The Concours d'Elegance of America
The Meadow Brook Concours d'Elegance was moved in 2011 to the Inn at St. Johns in Plymouth. This new location has helped spawn and expand additional shows and events held in conjunction with the concours. RM Sotherby's auction held their Motor City auction where they generated $7.4 million in sales. A 1935 Duesenberg Model SJ Dual-Cowl Phaeton earned the top sales honor with a selling price of $852,500. Other events included the TDC/AIG Motor Coach Tour, the Hagery Motoring Tour, an Art Preview, a Concert in the Park in Downtown Plymouth, MI, the Kip Sheward Motor Sports Autobahn Night, Cocktail receptions, Lecture series, Concours d'Lemons, 'Italian Happening' car show (a very impressive gathering of Italian car shows), and the Northville Concours Preview party.
Galleries
Gas Light Prior to 1915 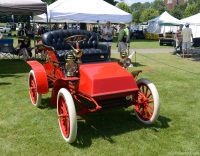