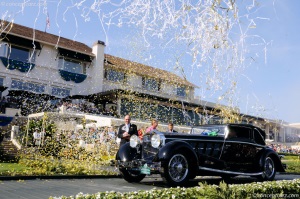 August 2015
PEBBLE BEACH, Calif. (August 17, 2015) -- An Italian Isotta Fraschini Tipo 8A Cabriolet that once turned heads and garnered top prizes in the classic era glided to victory at the 65th Pebble Beach Concours d'Elegance on Sunday.

The competition drew 219 cars from 16 countries and 29 U.S. states to the 18th fairway of Pebble Beach Golf Links. It also raised over $1.8 million to help people in need. Through the Pebble Beach Company Foundation, which celebrates its 40th anniversary this year, these charitable funds will benefit 100 local charities.

The winning car is built on an extremely long 145-inch 1924 Tipo 8A chassis, which was acquired in the early 1930s by Swiss Carrosserie Worblaufen to be used as the basis for a new sport cabriolet. The finished car was displayed at the 1932 Geneva Auto Show and won the Grand-Prix d'Honneur at Cannes in 1933. After being shown, the car passed through the hands of just three owners prior to being purchased by current owner Jim Patterson of Louisville, Kentucky.

Asked what he loved most about the massive cabriolet, Patterson chose to focus on its small details. 'I love the cigarette lighters,' he said. 'You should see them! I wondered a while ago if they worked, and I've got a blister on my finger to show they do.'

The car's win at Pebble Beach marked the second win for Patterson. His 1933 Delahaye D8S De Villars Roadster was named Best of Show in 2010. 'I won here in 2010 with an all-white car, and now I've won with an all-black car. I don't know if I've run out of colors or what,' he joked.

There were many strong contenders for Best of Show this year, including a 1914 Rolls-Royce Silver Ghost Kellner Torpedo Phaeton owned by Doug Magee Jr. of Wolfeboro, New Hampshire; a 1937 Delahaye 145 Franay Cabriolet owned by Sam & Emily Mann of Englewood, New Jersey; and a 1953 Abarth 1100 Sport Ghia Coupé owned by Grant Kinzel of Calgary, Alberta, Canada.

Concours Chairman Sandra Button said the win by the Isotta Fraschini wasn't a surprise given its provenance: 'From the moment that Cesare Isotta and the Fraschini brothers founded their company, they were known for building prestigious cars, and this particular car is very stylish and very powerful. Even when resting on the stage, it seems to be in motion, and it is filled with emotion. There is a lot of passion in this car.'

Ferraris were featured in great numbers this year, along with classic era duPonts, antique Popes, British prewar sports cars and postwar Cunninghams. Special classes celebrated the 50th anniversary of the Shelby GT350 and the 75th anniversary of the Lincoln Continental, and Mercury Customs were displayed for the first time. 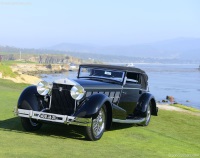