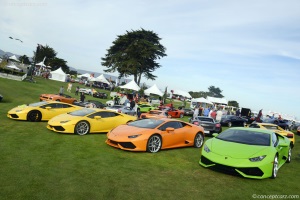 August 2015
Concorso Italiano is synonymous with Italian car excellence and embraces many of the cultural elements of Italian style, including cuisine, music, and fashion. This year, Concorso celebrated its 30th anniversary. It was also the year of the Ferrari Club of America national meet being held in Monterey. The Pacific Region chapter hosted this year, and as such there was a massive influx of Ferrari owners who joined in both 'Monterey Car Week' and the FCA National Meet.

Along with Italian marques, Concorso also had a special display of eclectic cars that have a tie to Italy, such as those built outside of Italy, but designed by Italian designers.

Iso Grifo
This year's Concorso Italiano celebrated the fifty years of Iso Grifo, a car that had Corvette power, fashionable Bertone styling and Milanese flair. It was one of the best all-around sporting GT car available and a worthy competitor to the most pedigreed European marques. Only 471 examples were built, and only a handful made it across the Atlantic. Sitting amongst many other Iso's on Concorso's well-manicured lawn were the first Iso and the last.

The Ferrari 250 GTE
About every ten years many of owners of the Ferrari 250 GT/E model gather at Concorso for a reunion. With over 25 examples of the 250 GTE and 330 America on display, it may have been the largest reunion of this model since the cars left the factory.

The 250 series of sports cars was Ferrari's most successful early line of vehicles, with several variants produced for over a decade from 1953 to 1964. The most celebrated 250 is the 1962 250 GTO, a true supercar that spawned numerous imitators. The 250 was eventually replaced by the 275 and the 330.

The Ferrari 250GTE was a new type of vehicle for Ferrari and one they hoped would appeal to a wider audience and could rival a sector of the market dominated by marques such as Maserati and Aston Martin. This was Ferrari's first series-production four-seater. The 250GTE 2+2 made its appearance in prototype form at the 1960 Le Mans 24-Hour Race, where it served as the Race Director's car. Its official world premiere followed later that year at the Paris Salon.

In true Maranello fashion, the Pininfarina designed 250GTE was an elegant and sporty Grand Tourer. Over the years, it would progress through three series, with changes being confined mainly to the front and rear lighting arrangements. Production continued until 1963, during which time 950 examples were produced. It was the most popular and commercially successful Ferrari to date.

The Lamborghini Diablo
This year, the Lamborghini Diablo celebrated its 25th anniversary. The name Diablo is Spanish meaning 'devil' and was borrowed from a type of legendary bull raised by the Duke of Veragua in the 19th century. The Diablo was introduced in 1990 and served as a worthy heir of the renowned Miura and Countach. Its body once again took shape under Marcello Gandini's pencil which, in this case too, included the infamous scissor doors. One year later, with the Diablo VT (Visco Traction) Lamborghini launched the first permanent four-wheel drive super car on the market, making its 500 HP even easier to tame – and other, more powerful models followed its success.

Awards
Mr. Ted Johnson of Ocean Ridge, Florida took home Best of Show with his 1961 Ferrari 250 SWB. In the Alfa Romeo category, Steve Yu took home 1st place honors with his 1964 Giulia Spider Veloce. The 1969 Mangusta prototype owned by Jeff Cobb earned 1st in the DeTomaso category. The 1958 Abarth Zagato owned by Perry & Nancy Solomon was 1st in the Fiat category. The most deserving Iso & Bizzarrini car on the show field was the 1967 Iso Grifo owned by Chris Schlander. Richard Mulke Jr.'s 1965 350 GT was 1st in the Lamborghini group and the 1993 Delta Integrale HF Evo 1 owned by McCallum was awarded 1st in the Lancia group. A 1974 Frua Quattroporte owned by the Riverside International Auto Museum was awarded 1st in the Maserati group.
Galleries
Alfa Romeo
DeTomaso