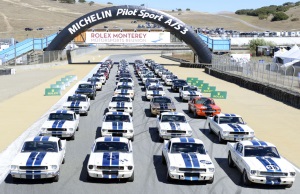 August 2015
The Rolex Monterey Motorsports Reunion is recognized as one of the very finest events of its kind worldwide. Together with the renowned Pebble Beach Concours d'Elegance, the two events anchor the Monterey Classic Car Week. For four sunny California days, over 65,000 spectators enjoyed motorsports history as the cars circled the Monterey Raceway hills and its signature zigzag Corkscrew corner. This year's special marque was the Shelby GT350 Mustang, which was celebrating its 50th anniversary. A special race group containing 38 Shelby GT350 Mustangs were paced by Henry Ford III and was given the green flag from Carroll Shelby's grandson Aaron Shelby. Other highlights included special race groups for Formula 5000 and Formula 1 racers.

Though the GT 350 celebrated half a century of glory, there was a century's worth of historic cars competing at the Rolex Monterey Motorsports Reunion. More than 550 entrants took part in the 2015 Rolex Monterey Motorsports Reunion. Part competition and part pageantry, the Reunion brings racing history to life as cars from nearly every era at Mazda Raceway Laguna Seca. The cars, selected for their historical significance, authenticity and correctness for the period, are divided into 15 classes, based on the type of car, displacement and era of origin.

The 15 race groups were comprised of some of the most recognizable marques in motorsports. There was Bugatti, Alfa Romeo, Talbott, Delage, Lotus, McLaren, Porsche, Ferrari, Aston Martin, BMW, Mercedes-Benz, Jaguar, Lola and so many more. Some of the most dramatic and entertaining racing was within the Formula 5000 group, whose last appearance in Monterey was in 1975 when Mario Andretti won the final professional F5000 race. That same car made a triumphant return home.

Shelby Mustang GT350
The Shelby Mustang celebration continued off the track and in the paddock where an enormous heritage display presented by Ford Motor Company featured the most famous of the Shelby GT350s. Nine GT 350s (from 1965 and 1966) were showcased in the Heritage Display, including chassis number 002, which was the factory's team race car for the first half of the 1965 season. Ken Miles and others drove the car to four Second Place finishes and 12 Firsts in 16 races. It later became a test and development car for all other R models built after that. Along with the original Shelby Mustangs on display, Ford took the opportunity to showcase the latest GT350 R with the naturally aspirated 500 horsepower V8 engine.

The Shelby GT350 race group included a pair of R models and a Hertz 'rent-a-racers'. The racing was dominated by Columbian Tommy Steuer and Australian Terry Lawlor, who won the pair of races.

Formula One and Formula 5000
The Formula 1 Group was comprised of cars from the three liter era between 1967 and 1984. 'Of the 37 Formula 1 cars entered in the Rolex Monterey Motorsports Reunion there will be eight or nine of our cars coming from Europe, and at least five of them have not raced in America since their last active year,' said Ron Maydon, founder of the FIA Masters Formula One Championship. 'For many European drivers, this will be their first time driving Mazda Raceway Laguna Seca,' said Maydon. 'There was an increased level of excitement as soon as it was announced that Formula 1 cars would be included this year at the Rolex Monterey Motorsports Reunion.'

The same cars that were originally involved in the epic driving battle for the 1976 F1 World Championship between Ferrari's Niki Lauda and McLaren's James Hunt (who won by a scant one point) were among the historically accurate and authentic cars that competed in Monterey this year.

Charlie Nearburg drove a Williams FW07B to a dominate performance in the Formula 1 race. The car had been used by Alan Jones to win the 1980 World Championship.

Further stoking the flames of Formula racing from the past, an impressively large field of Formula 5000 race cars took to the circuit on Sunday in Race Group 7B. This was the group's first time racing here since 1975 when Mazda Raceway Laguna Seca hosted their last professional Formula 5000 race. The Lola T332 that Mario Andretti drove to win that race 40 years ago was also part of the spectacle.

The Formula 5000 race was the final race of the weekend, and the ex-Mario Andretti Lola T332 took home the victory driven by Richard Dean.

Legendary Drivers
Contributing to the week's glamour were countless legendary drivers who enjoyed soaking in the environment and reminiscing about their former cars. 'I love it when I see my former cars racing here,' said three-time Formula 1 World Champion Sir Jackie Stewart. 'They may not go as fast as we did in the day, but it is wonderful to see them.'

There were multiple opportunities in the paddock to hear from and share stories with Sir Jackie Stewart, Scott Pruett, Brian Redman, John Morton and many other racing heroes of days past. Though last year was his first time coming to the Rolex Monterey Motorsports Reunion, Scott Pruett, a five-time Rolex 24 at Daytona winner, says it's now one of his favorite things to do. 'There is eye candy everywhere. It's overwhelming to all your senses – sight, sound and smell. For any racer like me it is wonderful to come here and see these great cars and the passion among the car owners and drivers. The event is a great fit for Rolex, and Monterey is a great fit for the event; there is no better place for these drivers to come to race their cars.'

Some legendary drivers showed up to race, including Derek Hill, who drove the sole-surviving Maserati Tipo 151 to a dominate performance in the Group 5A race. Former IMSA champion Parker Johnstone started from the pole and scored a pair of second place finishes at Mazda Raceway Laguna Seca in a return to the cockpit of his multiple title-winning Spice Acura. Between appearances on track, the Spice Acura was on display in the Acura Garage in the Laguna Seca paddock, flanked by the Acura ARX-02a LMP1 car driven to five victories – including Laguna Seca – in the 2009 American Le Mans Series title by drivers Gil de Ferran and Simon Pagneaud; and the new Acura NSX.

The Future
Since 1956, the Mazda Raceway Laguna Seca motorsports venue have provided an alternative location for racing, which had previously been done on public roads in nearby Pebble Beach. It has grown to one of the greatest historic racing attractions on the automotive calendar. For 2016, the celebration will continue with BMW as the featured marque, just in time for their 100th anniversary of its founding. The celebration is expected to be the largest outside of Munich. Already, an impressive number of 64 BMW entries, from a 1937 BMW 328 to a 2001 BMW M3 GTR, have been accepted into one of 15 corresponding race groups. Additionally, rather than a static heritage display that is typical for the featured marque, BMW of North America is developing the BMW Living Legends Garage to house a selection of representative racing BMWs that chronicle the history of the company. Many of these cars will be actively competing in the racing action so visitors will be able to see, hear and feel the living history of the brand.

The earliest BMW entered is a 1935 BMW 315/1 Willis Special. The 315 and elegant 328s will be competing against familiar foes such as from Lagonda, Alfa Romeo, Morgan and Bugatti on the 2.238-mile circuit. The largest group of BMWs will run in Group 4A. Here there are BMW 320is, 3.0 CSLs, M1s, and 3.5 CSLs taking action against Corvettes, Ferraris and BMW's northern neighbor - Porsche.