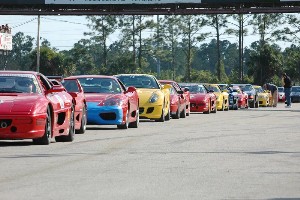 January 2007
Ferrari is an icon, a legend, and a legacy. Whether you love or hate the marque, the pedigree and respect it commands is undeniable. From its exclusive automobiles to its heritage on the race track, every knee must genuflect at the name 'Ferrari.' Ok, that may be a little much, but the marque is a very accomplished manufacturer. On the toughest terrain and against the fiercest competition, it has been Ferrari that has emerged victorious. Most innovative, stylish, sought after, and exclusive, the Ferrari name rules supreme. It is easy to hate 'the big guy' and go ‘against the grain' but there should still be respect. Enzo not only produced excellent road going cars, he backed it up on the race track. Every major circuit, nearly ever racing series, the Ferrari name has struck fear in its opponents and put smiles on the faces of those at the wheel. This year's Cavallino Classic was another one of those celebrations; an exclusive event for Ferrari's and a few select Maserati's and Alfa Romeos. Through rain and sun shine, the drivers at this year's Cavallino Classic put their cars through their paces.

The clothes of Pininfarina were the most popular for Ferrari chassis though the works of Scaglietti, Zagato, Touring, and others are among the most alluring. Style or personal preference, the results were always stunning; performance and style in a marriage that was one of the most holy of unions. Simplicity was taken to a new level while perfection and elegance were redefined. It was never Enzo Ferrari's goal to pursue perfection, but rather to outpace it. To be the pinnacle which all others sought; to continue to raise the bar; to redefine what once was, that was Ferrari's dream.

The Cavallino Classic racing showcases this tradition of excellence and pits Ferrari against Ferrari. In other words - the best against the best. There are four track days with the first two being private. This is the first event of the year for the Shell Ferrari/Maserati Historic Challenge. The groups are segregated into two competitive historic racing groups and modern road and track cars. The historic groups are further divided into drum and disc brake groups. Authentic Ferrari and Maserati cars constructed before 1981 are invited to compete. Within the groups, there are several classes. Among the more modern Ferrari's on the track were the FXX, Enzo, 599GTB, F40, 512TR, 575, and Challenge cars which included the 348, 355, 360, and F430.

The air was filled with high octane racing fuel and the occasional cigar smoke. The day prior to the race, the first of the public days, was cloudy, overcast, and occasionally rainy. Many who had been watching the practice session left when the rain began to fall. Many of the disc brake cars continued to run while the drum brake session decided to wait it out. The day of the race was a different story as the sun shone brightly.

There were two of the FXX machines on the track and they saw plenty of track time. They appeared to go cautiously through the corners, but on the straight stretches, the scream of the engine suggested otherwise. If you had one, would you drive it all out? This was a question posed when the Ferrari FXX was passed on the straight stretch by a Ferrari F333. What level of responsibility should the owner of an FXX assume? Obviously, their situation is different than most - they can afford a FXX supercar. The car is a paragon among other supercars and is the ultimate in power, handling, style, form, function, and refinement. Its only potential drawback is the driver. In the hands of the greatest of drivers, this is an unbeatable machine. So as the supercar was getting passed, the general consensus seemed to be that the driver was just enjoying the vehicle and driving it within his/her comfortable limits. This seemed to answer the question of how dangerously the owner of an FXX would drive his/her vehicle. This 'answer,' if you will, seemed unsatisfactory to spectators as their faces registered puzzlement, as if they were working through the scenarios. Each mind was pondering what would be more important to them - the thrill of driving an FXX to its truest potential, or protecting that $1.8 million dollar beauty.

A very rare treat was seeing Manny del Arroz showcasing his newly found 166 MM Barchetta, taking a few laps around the track. The car is unrestored and wearing Arizona plates. As Manny went through some of the corners, his head would turn around to survey the rest of the traffic behind him. There is a small rear-view mirror located in the center of the car between the two windshields but it appeared he felt more comfortable hugging the inside of the track and making sure he knew exactly where the others cars were located. This is understandable, considering disc and drum cars were also on the track at the same time and driven by those with varying skill levels. A 166 Barchetta is no match for an F40.

Shell Historic Challenge – Drums
Although this is an exclusive Ferrari event, a few select Maserati's and Alfa Romeo's are allowed to compete. Alfa Romeo cars are allowed due to Enzo Ferrari's involvement with the marque prior to World War II. This year the Alfa Romeo Tipo B P3 driven by Ned Sieker was the oldest car on the track. Though the Alfa Romeo car was at least twenty years senior to the rest of the pack, it did not act its age and insisted on competing with the rest of the cars, even managing to beat a few of them. There were more Maserati's in the drum group than any other marque. Three were Maserati 200 SI racers, two were 300S racers, a 250F, and A6 GCS Spyder. The Maserati 250F Monoposto racer driven by Peter Giddings was the fastest in the drum group and certainly the smallest, lowest, and best suited for the 2.25 mile Moroso Motorsports Track and its challenging sharp turns. The most entertaining vehicle of the day had to be the Maserati A6 GCS Spyder driven by Gregor Fisken. On more than one occasion, as the car seemed to be barreling out of control through the corners with its back end challenging the front for which direction it should go, a spectator would grin and proclaim 'that guy sure knows how to drive.'

Maserati cars took up seven of the top eight starting positions in the grid. The Ferrari 250 GT TdF driven by Charlie Arnott was able to split up the Maserati group and sat in seventh place. In 9th position on the grid was the Alfa Romeo followed by the two other Ferrari entrants. The cars were led around the track one time by a pace car before they were set free and the race began. The Maserati 250F driven by Giddings jumped into an early led and never slowed down, easily outpacing the rest of the cars through the twenty minute race. Wegner passed Price very early in the race, both driving Maserati 200SIs, but was able to re-secure the position. The battle continued throughout the race but Price was able to retain his second place position.

Other class winners in the race, along with Giddings and Wegner, were Spieker in the Alfa Romeo, Fisken in the A6GCS, and Arnott in the Ferrari 250 GT/TdF.

Shell Historic Challenge - Discs
The Disc Group was comprised of 19 Ferarri's such as the 196SP, 250GT, 250GTO, 275GTC, 308GT/M, 365 GTB/4C, and the 512BB/LM. Todd Morici in his 512 BB/LM was the fastest in practice and qualifying, beating the next competitor, John Goodman, by over seven seconds. The battle for the second and third starting grid position was divided by less than a second. Peter Sachs in his 250 GTO/64, wearing number 37, was in the next position. Breaking into the top five on the grid were a pair of 365 GTB/4C wearing numbers 64 and 65.

This was a very competitive race with nineteen cars on the track with many of them being nearly identical. Morici's position in first was never challenged, though competition was pretty fierce throughout the rest of the pack. The battle for second position was fought by Goodman and Schultz for many laps before Schultz retired due to mechanical difficulties. Jim Fuchs, in his 512 BB/LM, had started in the back of the grid since it failed to qualify due to mechanical problems. Though this was unfortunate for Fuchs, it was entertaining for the spectators as he quickly proved that his car was much faster than many of the cars that started in front of him. In the first lap alone he had passed five cars. All through the race he piloted his car around the thick traffic. With just a few minutes remaining, he had taken his car from last place to third. With only a few laps remaining, he passed Goodman to secure second but ran out of time before he could contend Morici for first.

In the middle of the pack there were nine 250/275 Berlinetta class cars all competing for class wins. Peter Sachs, in his Ferrari 250 GTO, drove his car to a class win while Nick Soprano and Ned Spieker battled for second and third in class. With only a few laps to go, it appeared that Soprano's second place would be taken away by Spieker. Soprano's pace had slowed since he had broken some of the spokes in his rear wire wheel, but he was able to maintain his position and finished second (In Class). Other class winners included Charlie Arnott, Steve Dudley, and Chuck Wegner. Arnott drove a 365 GTB/4C, Dudley drove a 308 GTB/M, and Wegner was in the Phil Hill autographed Ferrari 196 SP.

Conclusion
The Cavallino Challenge and Historic race is the season's opener and one of the highlights of the year, with its outstanding list of racing entrants, dinners and parties, and one of the best concourses in the country. And of course, the wonderful Florida weather in the middle of January does play its part.

The Ferrari Historic Challenge is an opportunity to hear and experience legendary and authentic competition Ferraris, Maseratis, and Scuderia Ferrari Alfa Romeos. The Moroso Motorsports Track is an excellent stage for drivers and cars to prove their capabilities. The course has ten turns which challenge the driver to keep the car firmly planted on the road and in their control. The long straight stretches allow for high top speeds and plenty of passing before heavy braking resumes and the cars are once again negotiated through the corners.

The presentation of the awards was held at the Breakers Hotel in West Palm Beach where Giddings and Morici were presented a Trofeo di Florida by Cavallino Magazine for their overall victories. Class winners were also awarded for their accomplishments; Nick Colonna was presented with a special 'sprit' award. The cars and competition were truly spectacular, reinforcing the pedigree of the Ferrari legend.
Galleries
Shell Historic Challenge - Drums 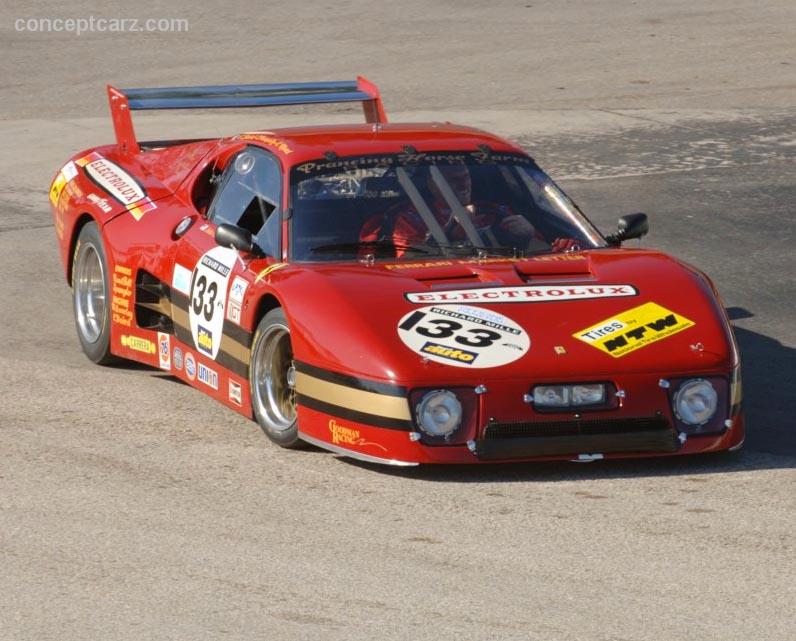