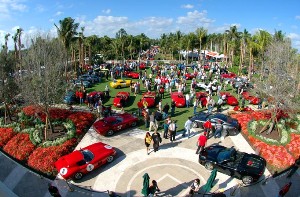 February 2007
The Breakers Hotel is world famous and located in West Palm Beach with ocean views and well manicured lawns. The long drive off the main road that leads to the front door is flanked by an abundance of flowers and plant life. This drive instantly reassures one that this is no ordinary hotel; it is ranked among the top in the country and even, the world. Once a year the hotel plays host to an exclusive Ferrari gathering, the Cavallino Classic. Many of the greatest Ferrari's in existence have graced the lawn of the Breakers Hotel croquet area. The event is traditionally held on the croquet lawn and tenth hole of the Ocean Drive golf course of the exclusive Breakers Resort. The show is divided into two areas, the upper and lower lawn. The upper concours area is closest to the hotel and is limited to a few select cars. These are the celebrated cars of the year and are among the most unique of their kind. The upper section of the concours has changed since prior years; it is now closed off, segregated by a decorative wall and plant life. The upper section has become even more exclusive and seems to add extra allure to the cars. The lower concours feels like its own separate unit; its own separate event.

Proceeding down to the lower area, the cars become more modern and familiar. Those nearest to the hotel are often the oldest while the ones closest to the bottom and near to the road are the most recent, such as the Testarossa, F40, F430 and 360. Paralleling the lower concours are special displays. Here you will find racing cars, art work, apparel, literature, and a few select vendors.

A common question throughout the day by the spectators was 'Which one is the oldest?' The most comical answer came from a father (or grandfather) answering his son's question - he said, 'I am.' This witty response was followed by laughter by all that was in proximity. The oldest Ferrari was no older than 60 years. The history of Ferrari automobiles dates back to 1947 so the legacy does not run as thick as other marques such as Alfa Romeo or Maserati.

This year the Cavallino Classic celebrated the 166, 250 TR, and F40 which turns twenty years old. The 166 Barchettas, meaning 'little boat', sat side-by-side on the upper concours lawn. Only 30 were ever constructed with twenty-five being done by Carrozzeria Touring. These were hand crafted machines with slight differences between each model. With them arranged in close proximity, the differences between each became more apparent and appreciated. The most obvious was the design of the hood scoop, or the lack thereof. Some were pointy, some were wide, and some were more like a 'vent' rather than a 'scoop'. Enzo Ferrari had intended these to be customer cars, but their success on the racing circuit had Enzo rethink their purpose. They were constructed of the typical tubular frame with the no-thrills suspension. The true genius of the car lay under the bonnet; the Colombo designed engine that displaced 166 cc per cylinder was enough to outpace and dominate.

There were three TR-Series cars in attendance. Their Scaglietti bodies were easily discernable as a purpose-built machine intended for track use and to strike fear in the hearts of their competitors. The 250 TR with chassis number 0666 was awarded the 'Outstanding TR' award by the judges. It was the first prototype TR constructed and based on the 290 MM chassis. It was used by the factory as a test car during the 1957 and 1958 season.

All of the 166 and TR cars were finished in Red; most of the upper concours field did not follow suite. The colors of yellow, silver, black, maroon, and blue, proudly displayed their defiance to tradition. Some of the colors were country colors of the car's first owner who championed the cars in competition. Others were the result of personalization.

One of the favorites among the Ferrari aficionado's seemed to be the newly-found, mostly-original, 'barn-find' 166 Barchetta with chassis number 0052M. Though the car was never really lost, it has been out of the public eye for nearly fifty years. It was recently featured in great detail in the Cavallino Magazine. This was one of its first public outings in a very long time. It was awarded the Vintage Preservation Cup Award in the pre-1975 category. Another highlight was the 1950 Ferrari 166 LM Berlinetta, not just because of what it is, but because of what it was. It carries chassis number 020I, but it is believed to have been chassis 02C making it one of the earliest Ferrari automobiles ever created. The factory raced the car for several years before turning the 'C' into a '0' and attaching an 'I' to the end. They then sold it to a privateer as a new car after Touring had given it a new body.

Chassis number 0052M was not the only un-restored car of the day. Sitting just a few feet away was 166 Spyder Corsa with chassis number 014I, showing some signs of its long life. By far, the car that was most in need of a little 'TLC' was the 195 Inter Touring Coupe with chassis number 0081S. There were holes in the floor boards, torn seats, rusted and barren exterior, no windows, and the list continues. The engine appeared to be newly refinished and had no troubles carrying the car wherever its driver wanted it to go. Many of the other cars were in perfect condition, as though they had not been affected by the passage of time.

Awards
Best of Show in the Competition Car category went to Brian Ross and his Ferrari 166 MM Touring Barchetta with chassis number 0006M. Best of Show for the GT cars was awarded to Tex and Tambi Otto and their Ferrari 250 GT SWB Alloy Berlinetta Competitizione with chassis number 2033GT. The F40 owned by Jasbir Dhillon was awarded the F40 Cup 'Outstanding F40'. The 166 Cup 'Outstanding 166 MM' went to Lorenzo Zambrano's 166 MM Touring Barchetta with chassis 0058M; this was one of six awards that Zambrano was awarded. Enrique & Malena Senior walked away with five awards, as did Nicholas Economou. Other individuals of the day accounted for multiple awards in more than one category.

The Judges Cup for the Ferrari most deserving as selected by the Honorary Judges went to Bruce & Jolene McCaw and their 375 MM Spyder with chassis number 0286AM. This exquisite racer still has the names 'Phil Hill' and 'Richie Ginther' adorned on the side of the vehicle. Alberto Ascari drove the car to a first overall finish at the 1000km Nuerburgring. Luigi Chinetti drove the car at the Carrera Panamericana in 1953.

In the sixteen categories of Class Awards there were 55 Platinum, 12 Gold, and 10 Silver Awards handed out to those deserving cars that met the requirements. Platinum awards were given to those vehicles that scored 95 points or more. Silver required 90 points and Gold required 85. Every car in the 'Class 11 - 550', 'Class 12 – 288GTO/F40/F50', and 'Class 13 – 2+2' that received an award received 'Platinum'.

Conclusion
'Racing cars,' said Enzo Ferrari, 'are neither beautiful nor ugly. They become beautiful when they win.' By this reckoning, the Ferrari automobiles are among the most gorgeous creations in the world.

Cavallino is Italian for the Prancing Horse, the venerated symbol of Ferrari. And the word Cavallino, for the true enthusiast, embodies the very essence of Ferrari. With the scenery, location, weather, and cars it will be hard to find a Ferrari event that rivals the Cavallino Classic.
Galleries
Upper Concours 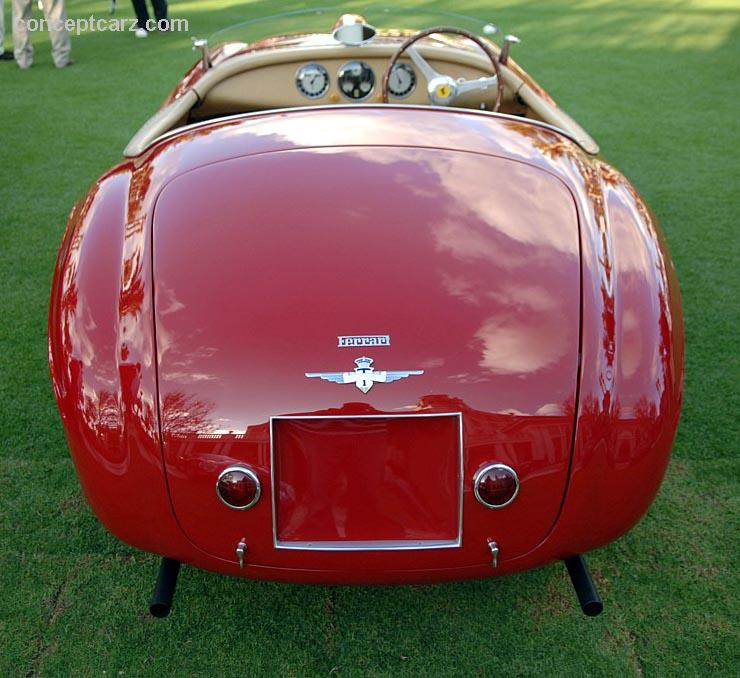