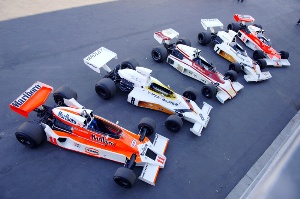 September 2006
The 33rd Annual Monterey Historic Automobile Races played host to some of the finest racing machines ever created. The complex and challenging Mazda Raceway Laguna Seca with its infamous 'corkscrews' and rolling terrain are enough to challenge driver and machine and entertain the on-lookers. The cars that are invited to race at this event and be apart of the annual celebration are among the rarest machinery in the world. Their value is priceless, and to entice owners to pull their pride-and-joy out of the private collections and museums in which they are housed, and race on this challenging course, safety is a top priority. Aggressive driving is discouraged; this may take some of the 'fun' out of the sport, but it does help preserve the vehicles and allow spectators to enjoy the cars in true form on one of the greatest racing circuits in the world.

Though aggressive driving is discouraged, it does not mean the cars are not driven with passion and pursuit for the checkered flag. It would be hard for the drivers not to preserve the legacy of the car, or try to establish a new one.

This years theme honored the cars and accomplishments of Charles and John Cooper, and the Formula 1 World Championship winner, Sir Jack Brabham. Brabham captured the F1 Championship on three occasions, twice in a Cooper and once in a car bearing his name.

Toyota was the new sponsor for the event, and showcased a number of their historical Toyota Motorsports racing cars. Their 2006 Formula One contender, the TF106, was brought to the track for a demonstration session, where Ricardo Zonta drove several laps, securing the lap record on his first attempt. As he continued to race around the course and became accustomed to its curves and rolling hills, his time continued to drop. He broke the old record by 1.2 seconds with a time of 1:06.309 averaging 121.504 mph. The whine of the engine and the shifting of gears was heard well before the streak of white and red flashed into view.

DaimlerChrysler, another sponsor of the event, brought an ex-Mille Miglia 300SL with legendary driver, John Fitch, at the wheel during the parade laps. Four McLaren SLRs lead by talk-show host, Jay Leno, circled the track during the parade events, accompanied by handful of lucky owners of the limited edition MINI Cooper Works GP, represents 'Grand Prix'. The GP Coopers are limited-production, sport tuned models with seating for two and enhanced with performance features throughout the vehicle. The engine has been tuned to over 210 horsepower, the suspension enhanced, and the brakes enlarged to accommodate the performance. The owners took delivery of the cars at the track and were getting the opportunity to enjoy the cars for the first time, while being closely watched by a large and enthusiastic audience. In total, there were 2000 examples of the Cooper GP produced worldwide.

Cooper Marque
Charles and John Cooper created the Cooper Car Company in 1947, just after the close of the Second World War. Their beginnings were modest, working out of a small garage in Surrey, England. Within a short period of time, the cars they built began to dominate racing series, including F3, F2, and eventually, F1. Their success was the result of ingenuity; they proved the benefits of placing the engine behind the driver, which allowed for a reduced frontal area and better weight distribution. There was no need for a driveshaft to run under the drivers seat, which allowed the driver and engine to sit lower to the ground, improving the cars center of gravity, increasing performance and cornering, and reducing the overall weight. In 1959, Brabham, along with the Cooper factory team, would become the first to win the Formula One World Championship in a rear-engined car. By 1960, many Formula 1 teams would follow Coopers lead by switching to mid-engined layout. By 1962, all cars run in F1 had the 'cart before the horse'.

The Formula Jr & Formula 3 class at this years Historics saw a very diverse group of Cooper machinery racing around the track. The highlight was the F1 and F2 class, showcasing cars from 1955-1965, and nearly all of the cars in this group were Coopers.

Cooper saw the potential of the Mini, being sold by BMC, in the early 1960s. Its front-engined layout and handling capabilities meant it could be a viable racing machine, it just needed sufficient power. With a few enhancements by Cooper, the cars began to dominate rally racing throughout the 1960s, including the 1964, 1965, and 1967 Monte Carlo Rallies.

The many accomplishments of the Cooper Company were honored as the cars they built traversed the course and proved once again they had what it takes to keep pace, and challenge for overall victory. In the Formula Junior class, the checkered flag was captured by a Cooper T59 driven by Jimmy Domingos. Barrie Williams managed a second placed finish in his Cooper Monaco in the 'Sports Racers over 2500cc' class. Three of the top five finished in the 'F1 & F3 Car' class were Coopers, with first going to a Cooper T53 and second to a T45/51. Cooper cars had a strong showing in the 'Sports Racing Cars Under 2500cc', capturing first, second, and fifth place.

Jack Brabham's career began to shine behind the wheel of Cooper car in Australia. He moved to England in 1955 and was instrumental in convincing the Cooper Company to create a single-seater version of their mid-engined T39 Bobtail Sportscar. By 1958, Stirling Moss became the first individual to win an F1 race in a mid-engined car, and that success was quickly followed by Jack Brabham claiming the World Championship in 1959 and 1960 in a Cooper.

Brabham formed his own company, along with designer Ron Tauranac, in 1960. Their focus was on the Formula series, with their main emphasis on Formula 1 and single seater racing. By 1966 he had created a worthy machine, and once again claimed the World Championship, this time in a car bearing his own name. He became the first individual to claim the title while driving a car of his own construction.

The Group 3, 'Formula Jr and F3 cars' at this years Monterey Historics was probably the best example of the Cooper and Brabham legacy, as all top five positions were captured in either a Cooper or a Brabham built racers. The Brabham BT2 claimed second and the Brabham BT6 finished third.

Historic Racing
The categories included pre-1940 cars, Sports Racing/Production, Formula Jr, Formula 1, 2, 3, Historic IMSA, Trans Am, FIA Mfg. Championship Cars, and Production Sports Cars. Most of the races were heavily contested for the overall victory. The exceptions were the Pre-1940 category which saw Rodney Smith's 1934 ERA cross the finish line over a minute faster than the next competitor. Rob Walton and his 1959 Lister-Chevrolet enjoyed a 18 second lead in the 'Sports Racers Over 2500cc' category. Mark Gillies drove his Cooper T53 nearly 12 seconds faster than any other car in the '1955-1965 Formula F1 & F3 Cars'. Chris MacAllister and his 1972 Mirage M6 easily won the '1965-1972 FIA Mfg. Championship Cars' category by 18.8 seconds. The rest of the groups were contested by seconds, in some cases, milliseconds, for the coveted first place finish.

All races were run for ten laps, which proved adequate to determine outright winner on the 11-turn, 2.238-mile road course. The progress of racing was evident as the Pre-1940 cars took to the track, some with riding mechanics (the cars had no mirrors so the duties of the riding mechanic extended to watching the rear traffic) keeping true to the era, and 'casually' traversed the course. In comparison to other groups that followed, particularly the F1 and FIA Championship Cars, their efforts appeared to be 'casual.' In reality, every mechanical component in the cars were being tested and brought to their limits. The flavor of cars and racing categories that followed were enough to entertain and excite nearly every degree of interest in the sport of racing. The howl of the engines, the emotion of driver and car through the turns, the shriek of tires, the smell of racing fuel, and the glorious California weather were constant reminders why this is one of the greatest Historic Racing Events on the calendar. There simply is no greater venue that hosts a better array of historic racing pedigree in competition, in the world. For this reason, it attracts the most unique and rare cars out of their slumber and transforms them from museum pieces back into fierce racing machines.

Conclusion
It is hard to attend this event and not feel overwhelmed. The wealth of history on and off the track is impressive. These are the cars that revolutionized their sport, redefined the boundaries of impossibility, and brought glory to their respective marques. The week in which all this transpires is filled with many concourses and auctions, most notably the Pebble Beach Concours d'Elegance. This time of the year has become the Mecca for the automotive enthusiast; the Monterey Historics has played an important role at making this collection of activities and events into the success that it has become.
Galleries
Pre-1940 Sports, Touring & Racing Cars