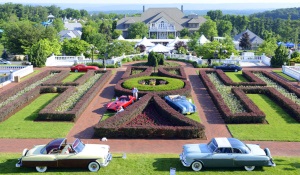 June 2016
The Elegance at Hershey brings together some of the world's finest collector cars to 'The Sweetest Place on Earth.' The event is held at the formal gardens at the historic Hotel Hershey, in Hershey, PA. The show field, which consisted of about 65 automobiles, showcased some of the finest cars from every era.

The theme for this year's Elegance at Hershey is Celebration of Speed. The car chosen to epitomize that concept was the Alfa Romeo Touring Spyder owned by Mr. Oscar Davis of Elizabeth, NJ. The Alfa Romeo 8C 2900B was used to grace all of this year's Elegance advertisements and promotional materials. The car is an elegant and timeless aggregation of styling and engineering, and is the perfect example of form following function. The car was placed in a prominent spot on the show field, near fountains and gardens, and facing the Chrysler CL Custom Imperial owned by Mr. Joseph Cassini. The Chrysler was a Best of Show winner at the 2012 Concours d'Elegance of America at St. John's. Looking around the show field, it became quickly evident that nearly every car on the field was a Best of Show or Best of Class recipient at many events across the United States, including the Amelia Island Concours and the Pebble Beach Concours.

This year's recipient of the Governor's Cup (equivalent to Best in Show) was a 1934 Mercedes-Benz 500K Roadster owned by the Miyabi Collection of Honolulu, Hawaii. It was built by the Mercedes-Benz Sindelfingen works and is the only 500K with special louvers, unusual fenders and without doors. The lack of doors reinforce the claim that it may have been raced at some point in its early life. The car also appeared in the 1938 German movie Der Blaufuchs (The Blue Fox). Its postwar years were spent behind the Iron Curtain, even reportedly being fitted at some point with a trailer hitch sot that its owner could more easily haul firewood. It was exported to the United States in 1987 and soon after received a comprehensive restoration. It was shown at the Pebble Beach Concours d'Elegance in 1991 and in 2015.

The Founder's Award was bestowed to the 1937 Delahaye 135M of Myron J. Schuster. It is equipped with a special Grand Prix competition engine, and is one of six examples built by Carrossier A. Guillore of Courbevoie, France.

The Hotel Hershey award went to the 1934 Duesenberg SJ owned by Bob Bahre. Mr. Bahre's car was one of four Duesenbergs on the show field, two were Model J's and two were the supercharged SJ models. Mr. Bahre's car wears coachwork by Rollston and is painted in its original color of Roosevelt Maroon. Its interior is fitted with dual glove compartments in the instrument panel, a reclining rear seat, and a rare banjo-style steering wheel. It was originally owned by Miss M.L. Flick, later to become Mrs. Margaret Hoffman of New York City.

The 1948 Tucker 48 sedan owned by the Richard H. Driehaus Collection was awarded with the People's Choice Award. It is the eighth Tucker to roll down the assembly line and it has its own interesting history. It was won in a VFW raffle by Rudy Schroeder in September of 1949 - but he sold it when he couldn't get the car insured! In recent years, Mr. Schroeder was reunited with his former Tucker.

Mr. Ralph Marano brought two very special Packard Monte Carlo's with coachwork by the Henney Motor Company. These were show cars that appeared in 1953 and put on a tour of various Packard dealerships. Each is powered by Packard's venerable 327 CID, 180 horsepower straight-eight engine.

Another equally impressive concept was the Cadillac Series 62 Pininfarina Concept. In 1953, a new Cadillac Series 62 was shipped to Italy where Pinin Farina built this one-off for Norman Granz, a Beverly Hills concert promoter and record producer. It was patterned after the PF 200 Granz had seen at the Geneva Exhibit in 1952. When the Turin coachbuilder completed the car, there were very few Cadillac elements left on the vehicle. The iconic Cadillac bumpers and a Cadillac 'V' positioned inside its radiator grille reminded onlookers of its Cadillac roots. The car was on the Pinin Farina stand at the 1954 Paris Auto Show.

Charities
The inaugural 'The Elegance at Hershey' was first held in 2010. Almost instantly, it became one of the premiere events of its kind, showcasing rare, seldom-seen cars with stunning backdrops of the Hotel Hershey. In keeping with Mr. Hershey's legacy of philanthropy, this event also benefits the Juvenile Diabetes Research Foundation and the AACA Museum and AACA Library & Research Center.
Galleries
Pre-War Cars
Post-War Cars