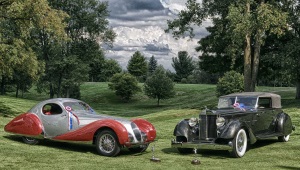 July 2016
With over 300 vintage and classic automobiles and motorcycles from 31 states and countries, the Concours d'Elegance of America reaffirms its position as one of the most prestigious automotive events in the world. This year's event paid tribute to may special features, including Ford GT-40s, Body by Dietrich, Rally Cars, Pierce Arrow, 110 years of Lancia, Jet-Age Travel Trucks, and a superb assortment of Classics and early Brass cars.

Among the well-curated classes were the Pierce Arrow and the Body by Dietrich. Having the vehicles arranged side-by-side, the history and evolution was apparent and easy to appreciate.

The Pierce-Arrow group consisted of ten cars from 1911 to 1933. The first Pierce car was built in 1901 and in 1903, Pierce introduced a bigger car called the Arrow. This led to then Great Arrow with cast aluminum body panels on a 93 inch wheelbase and helped build Pierce's great reputation by winning the first five prestigious Glidden Tours. Beginning in 1909, Pierce-Arrow became known as the car of Presidents when President Taft used one for official occasions. This practice continued until the last Pierces were ordered in 1935. In 1914, Pierce-Arrow introduced integral fender headlamps as an option which became the most recognized design cue for Pierce-Arrows for the rest of the company's history.

The Body by Dietrich class consisted of Lincolns, Duesenbergs, and Packards that all wore coachwork by the legendary coachbuilder, Dietrich. The company was founded in 1925 by Raymond Dietrich, co-founder of LeBaron Incorporated in New York. Dietrich, Inc. did styling work for standard bodies for Packard, Franklin, and Erskine. Dietrich, Inc. also built custom bodies to single orders, and proposed semi-customs for Lincoln, which was then headed by Edsel Ford. By September 1930, Dietrich was out of his company and Dietrich, Inc. was closed in 1936. In 1932, Raymond Dietrich became the first head of design of Chrysler.

The judges found their Best of Show (American) within the Body by Dietrich class, selecting the 1934 Packard 1108 owned by Joseph and Margie Cassini, III. The car was given a restoration that took more than 10,000 hours and was completed in 2013. It was brought to the 2013 Pebble Beach Concours where it rolled away with their top honors. It is a beautiful vehicle with two Best of Show honors, a testament to the craftsmanship of Dietrich.

After beating Ferrari and winning the Le Mans in 1966, Ford returned with an entirely new car, the Mark IV. Built entirely in the United States, the Mark IV and drivers Dan Gurney and A.J. Foyt dominated the 1967, 24 hour Le Mans. With an eight cylinder engine and record breaking average speed of 135 mph, the all-American team and car took the victory for a second year in a row. The Concours of America celebrated this accomplishment with two special classes, both called Racing Through the Ages, one for the Ford GT40 and the other for the modern version, the Ford GT.

The annual event honored Barry Meguiar as the 2016 Concours d'Elegance of America 'Enthusiast of the Year.' Meguiar, best known as host of the Velocity series 'Car Crazy,' has spent many decades in the classic car community. 'I'm excited to be recognized by the Concours d'Elegance of America board and I look forward to renewing old friendships and making new ones in the car capital of the world,' Meguiar said in a release.

The Collectors of the Year was the Patterson Collection, who brought six stunning examples from their collection. They have taken major awards around the globe and have some of the finest and most elegant vehicles ever created. Among their list of accomplishments are the 2010 and 2015 'Best of Show' winners at the Pebble Beach Concours, along with winning Best of Show at the 2014 and 2015 Concours of America. The cars that were brought to the show included a 1933 Delage, 1936 Delahaye, 1937 Talbot Lago, 1924 Isotta Fraschini, 1939 Bugatti and the 1937 Bugatti Atalante.

The Concours of America awards two Best of Show winners, one for an American car and the other to a European car. As mentioned above, Mr. Cassini's Packard won the America award. The European car chosen as the Best of Show was the Talbot-Lago T150CSS owned by J.W. Marriott, Jr. It is the only known aluminum body and fender car built. The car spent its early life in France and Switzerland. It was also the first 'New York-style' Teardrop coupe built. Produced in France, the ultra-rare Talbot-Lagos are among the most sought after collector cars ever built. Featuring exceptionally streamlined styling and certainly light enough to be raced competitively, they were called Goutte d'Eau (drop of water), and they became known as Teardrop Talbots. Famed Parisian coachbuilders Joseph Figoni and Ovidio Falaschi would actually patent the car's distinctive flowing shape.

The 38th Concours d'Elegance of America brought a great selection of vehicles, from the Brass Era to Modern Collectibles, from sports cars to super cars, and from Jet-Ag Travel Trucks to Drag Cars.
Galleries
The Patterson Collection