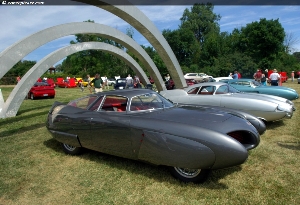 August 2007
Alfa Romeo was the featured marque at this year's Meadow Brook Concours d'Elegance. In conjunction with the concours, the Alfa Romeo Owners Club (AROC) staged their national meet on the day prior to the concours. The featured models for this year's event included the 1966-1969 Duetto, 1750 Long-Tail Spider, and celebrated the 40th anniversary of The Graduate. In addition, there were special displays of the 1900, Montreal, and Sprint Speciale. The following day, at the Meadow Brook Concours, there were three special categories for Alfa's including the 8C 2300/2600/2900, the 1900 cars, and 'Significant Alfas.'

The AROC meet encompassed many historically important, rare, and impressive machines created by the Alfa Romeo marque. The earliest vehicle on the field, and the oldest Alfa Romeo in the United States, was the RLSS-TF. It was given the 'TF' designation due to racing in the touring-car class of Grand Prix events such as the Targa Florio. Drivers who have piloted this machine included Enzo Ferrari and Alberto Ascari. Another equally important racing machine, and possessing nearly the same seniority, was the Alfa Romeo 6C 1700 GS with coachwork by Zagato. These machines were ideal for racing due to their twin cam supercharged engines and short, lightweight chassis.

Vittorio Jano joined Alfa Romeo from Fiat in 1923 and he was responsible for much of the company's success. The 2300cc engine that powered the 8C 2300 was his handiwork. The engine has two identical four-cylinder blocks, with a dry sump oiling system. The two-piece crankshaft rides on ten bearings and has camshaft and supercharger drives located mid-block. It produces 142 horsepower at 5,000 rpm and feeds a four-speed gearbox. There are large finned drum brakes at each corner. These machines were more than capable of carrying on Alfa Romeo's legacy of proven performance.

In the early 1950's, Alfa Romeo commissioned Bertone to create an aerodynamic experimental vehicle to measure the effects of streamlining on a car's performance. The result, with the assistance of Scaglione, was the B.A.T. 5, representing 'Berlinetta Aerodinamica Tecnica'. 'Berlinetta' means 'small sedan' or more precisely, 'coupe.' The design featured rear fenders and curved fins, truly a unique design. It was built upon an Alfa Romeo 1900 chassis.

The final B.A.T. Concept, the B.A.T. 9 was completed in 1955. It continued the experimentation with aerodynamics but not as exaggerated as the prior models. The body styling took into account future production requirements and is arguably the most attractive of the B.A.T. automobiles.

All three B.A.T. automobiles were aligned next to each other and positioned in close proximity to the Alfa 6C and 8C automobiles on the Concours field. It was exciting to examine the evolution in design, inspiration, and aerodynamics of this experimental line of vehicles.

Visitors and entrants to AROC at Meadow Brook were treated to a car that will lead the marque's return next year, the 8C Competizione. Production will transpire at the Maserati factory utilizing many Maserati parts, including its 4.7-liter V8 engine. Though details are still being pieced together, they will most likely be sold at Maserati plants for around $200,000. Ninety-nine examples are scheduled to make their way to the US, though all are probably already sold.

This was truly a spectacular event with nearly every Alfa Romeo model produced in the post-War era and many significant masterpieces from the pre-war era making a showing. Everything from production to racing was on the field with some having been restored to concours quality, while others were original and carried the minor scares that only a long life can inflict. This was a concours event and as such, the vehicles were divided into classes and judged. There were a total of fourteen groups with many vehicles scoring ninety points or above. Bernardo Martinez's 1965 ex-Lepro Rally GTA scored the highest, with 101.5 points. Richard Ballentine's 1965 TZ scored an impressive 100.2 points, the 1959 Vignale 2000 of Dellmas Green earned 100.1 points, and the 1961 Spring owned by Harry Borde was awarded 100 points.