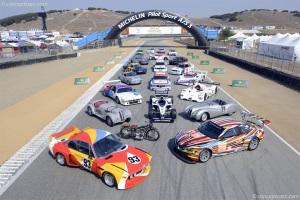 August 2016
The Rolex Monterey Motorsports Reunion is recognized as one of the very finest events of its kind worldwide. Together with the renowned Pebble Beach Concours d'Elegance, the two events anchor the Monterey Classic Car Week. Around 550 race cars participated in fifteen different groups over a four day period, making it one of the largest racing events on the automotive calendar. A record four-day total of 70,525 spectators joined in the celebration of motorsports history at the raceway.

'The economic impact of Monterey Classic Car Week in our community is significant and seems to strengthen each year,' says Gill Campbell, CEO and general manager of Mazda Raceway Laguna Seca. 'Our area hotel, restaurant and service partners greatly look forward to laying out the welcome mat for everyone who arrives and to do their best so that everyone can enjoy their Monterey experience.

According to a report conducted by the California State University Monterey Bay College of Business, Monterey Classic Car Week and the Rolex Monterey Motorsports Reunion, in particular, is an economic engine for the community.

This year's reunion honored BMW's centenary and the fiftieth anniversary of the Can-Am and TransAm championships.

BMW Centenary
BMW brought seven cars from the collection of the North American subsidiary and entered them in the races. The list included the 'Stars and Stripes' M3 GTR that won its class at the 2001 Petit Le Mans and the V12 LM that won the 1999 Sebring 12 Hours. The BMW collection was joined by many other private entries including the M1 Procar that won the 1980 Japanese Endurance Championship. All four of the original BMW 320 Turbo Group cars were reunited, with two being entered in the event. Some of the earliest BMWs competing at Mazda Raceway were the 328 models, which are arguably one of the most successful sports cars of the 1930s racing scene. A fan favorite were the BMW 2002s, which helped establish the company's racing presence in the United States. One of the most exotic were the Giugiaro-designed M1, which were raced by pro drivers in a series that pitted touring and sports car drivers against Formula 1 stars.

In total, there were more than 60 BMW race cars entered in the races and BMW North America presented its Living Legends Garage that told the magnificent story of this Bavarian company.

The horsepower was felt and heard as roughly 36 historically accurate ground-pounding Trans-Am cars competed around the 2.23 mile road circuit.

Golden Years of Can-Am Racing
The Can-Am Series, short for Canadian-American Challenge Cup, was known for its free-wheeling rule interpretations that inspired experiments such as ground effects, liberal use of exotic materials, big wings, two engines, and even perfecting turbocharging. The only basic requirement was that the cars were to be 'sports cars,' which meant they must have room for a passenger.

The series had minimal regulations, permitted unlimited engine sizes, virtually unrestricted aerodynamics, and basically had an 'anything goes' policy. This fostered creative machines that explored many realms of automotive technology and engineering.

The Mazda Raceway celebration included a field of Lolas, Shadows, McLarens, Porsches and others which were segregated into two separate grids of historic cars that competed in the series. The first group was comprised of USRRC and Can-Am cars that raced between 1963 and 1968, while the big bore Can-Am group featured racers from 1968 through 1974.

Nearly all of the nine championship winning CanAm cars were present, either on or off the track, at this year's Monterey Motorsports Reunion. The list included the Lola T70 of John Surtees that won the inaugural event and a Porsche 917/30 which had been driven by Mark Donohue to the 1973 championship. The McLaren M6A-1 has roots the can be traced back to then-called Laguna Seca Raceway. This is where it took the checkered flag to win the second annual Can-Am race, driven by its namesake - Bruce McLaren, in the 1967 Monterey Grand Prix. McLaren drove the car to an impressive victory over Jim Hall's Chapparal 2G and George Follmer's Lola T70. Following the 1967 season, the car was sold to Penske Racing and prepped for Mark Donohue, who then drove it to victory at the United States Road Racing Championship (USRRC) race at Laguna Seca on his way to capturing the 1968 championship.

1974 would be the final year for the original Can-Am championship, as spiraling costs and a recession in North America following the oil crisis, and dwindling support and interest led to the series being cancelled.

Each year the highlight of the Rolex Monterey Motorsports Reunion is its featured marque presentation. The BMW 100th anniversary celebration, both through its paddock display and the historic race cars, was a presentation in keeping with the marque's illustrious racing history.

The Rolex Monterey Motorsports Reunion has been described as a rolling museum the revs life in 15 race groups throughout four full days of competition.

By Dan Vaughan
Galleries
1A : Sports Racing and Touring Cars