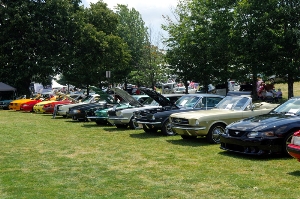 September 2007
Bringing a vintage car to the event showed support for the Vintage Grand Prix and the charities they support. It also allowed the owner a prime parking spot that was in close proximity to the racing activities.

If visiting as a spectator, there is a good amount of walking involved throughout the steep and hilly Schenley Park. For many, the car show is a social event as owners stay close to their vehicles, seeking out those interested in talking about their pride-and-joy. Since this is also the main gathering for many car clubs, it is a great opportunity for old friends to 'catch-up.' Though this is not a 'judged event' many car clubs often judge the vehicles within their groups. Awards vary, such as 'most unique', 'furthest traveled', 'best rims' and more. It is an extra incentive that seems to inspire many members to attend.

Muscle cars, vintage cars, super cars, antique/brass era cars, luxury cars, micro cars, racing cars, military vehicles, sports cars, gran turismo's, and more were all at the event. This one-day car show event heightens the appeal for the main attraction - the Vintage Grand Prix. It is one of the largest gatherings of car clubs, car lovers, admirers, and enthusiasts in the country. Plus it is free with all donations going to charities.

Mercedes-Benz was this years featured marque; it had one of the larger gatherings of the day and had prime parking on the hill. A gorgeous Mercedes-Benz 290 sat close to one of the main tents and allowed visitors a glimpse back in time to when the Manheim Factory near Nuremberg, Germany produced mostly government and military vehicles. The example on display was originally constructed for the German Ambassador to Iceland who used it as a spy car. It was installed with a radio transmitter hidden behind the dashboard and a hidden antenna between the headliner in the top. Because the car was always moving, the English could not get a 'fix' on it.

Another very rare and unique automobile in attendance was the Armstrong-Siddeley Typhoon. A total of 1,701 examples were produced from 1946 through 1949 with only a handful making their way to the US. Armstrong-Siddeley Motors was the first company based in the UK to introduce a new line of vehicles after World War II.

A large group of Datsun/Nissan's were lined near the main road. The vehicles in attendance included the 'Z' family consisting of the 240Z, 280Z, and the 300Z. The cars front end pointed to another large group, the Mazda Miatas. Nearly every year of the Miata/MX-5 graced the golf course lawn. They were flanked by the Italian cars, consisting of marques such as Citroen, Ferrari, and Fiat, and Mercedes-Benz. Sitting behind the Italian cars were a very large group of Porsches. The Porsche group is always a strong visitor, consisting of numerous 356 and 911s.

Divided by a street were the American cars. On the far side were the Corvettes, again encompassing what seemed to be nearly every year. Special examples, such as the Gran Sport, were some of the more enjoyable examples on display. Ford had their Mustangs and Thunderbirds, while Pontiac had their GTOs and Fieros. Cadillac had their Eldorado and Deville's and Buick their LeSabre's and Rivieras. Equally, luxury and exotic marques were in strong force, such as Rolls-Royce, Lotus, Aston Martin, and Bentley. The British Car Groups always seem to have the highest turn-outs; the MG's, Austin Healeys, and Triumphs were at the peak of the hill with nearly every model and year produced being shown.

This year the car owners did not have to worry about sprinting to their cars to cover them up. The weather was wonderful and sun block abundant.

This is truly amazing and hard to believe except by visiting in person. The thousands of cars on display are well organized and grouped according to make and model. It requires many hours just to walk through the many rows and view all cars in attendance. In the background the historic cars are racing on the 2 mile road course. It is literally the automotive enthusiasts version of being a kid in a candy store.

The PVGP is truly a unique event on a course that is one of the most exciting and challenging around. Racers traverse the 2.33 miles of twisting roads through Pittsburgh's Schenley Park. This makes it the only vintage car race in the nation that is held exclusively on city streets. There are five 180-degree hairpin turns along with nine other turns. The final quarter-mile stretch that leads to the finish line is straight.

The event is made possible by the all-volunteer Pittsburgh Vintage Grand Prix Association and sanctioned by the Vintage Sports Car Club of America. It serves as a community event and fund raising project for the Autism Society of Pittsburgh and the Allegheny Valley School, an organization serving children and adults with mental retardation and physical handicaps.
Galleries
Alfa Romeo
Allard 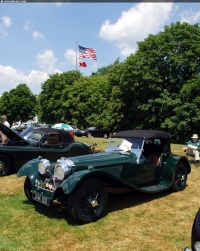