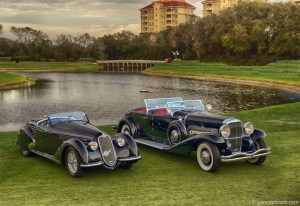 A year ago, in 2016, the Amelia Island Concours was shortened due to threats of rain. The event, which is held on Daylight Savings Time - meaning there are 23 hours in the day - condensed the day's activities so that there would be time for a successful conclusion of the awards ceremonies.

If 2016 did not prove challenging to the show organizers, 2017 certainly made an impact. With weather forecasts predicting 90-percent likelihood of precipitation and poor weather for the day of the show, the organizers made the decision to hold the event a day early (on Saturday, March 11 instead of Sunday, March 12). This was a bold and monumental decision as meteorologists only provide projections of possible weather conditions. The decision would later prove to be the correct gamble.

However, the amount of work related to this change must have been monumental. The public, exhibitors, vendors, caters, security, transportation, safety officials and police officers, etc. all had to be updated to the change. The show field would need to be ready a day early. Events that were scheduled to occur on Saturday had to be re-scheduled, combined or cancelled. Countless number of details had to be checked, re-planned, and re-worked. Even with the changes, public expectations remained the same; everyone who valiantly re-worked their schedule to arrive a day early expected to be impressed by the same World Class Event that they have come to love.

Two miracles occurred: first, Saturday proved to be the correct decision as Sunday was plagued by intermittent wind and heavy rain. The second miracle was the 'Saturday' show, which met and exceeded expectations. The show field was perfect and filled with nearly every scheduled exhibitor. The number of spectators appeared to equal prior years, and the 'Saturday' Florida weather was blissful.

This year reinforced the truth that a great show requires a great location, expert and distinguished judges, an outstanding list of entrants, and the skill, expertise and dedication of volunteers and organizers. The Amelia Island Concours Founder and Chairman, Bill Warner, and his staff are to be commended at the highest level.

The Honoree
The honoree for 22nd Annual Amelia Island Concours d'Elegance was Al Unser Sr., who is the younger brother of fellow racing drivers Jerry and Bobby Unser, and father of Al Unser Jr. He is the second of three individuals to have won the Indianapolis 500-Mile Race four times, the fourth of five to have won the race in consecutive years, and won the National Championship in 1970, 1983, and 1985.

In traditional fashion, the show began with the honoree driving one of his race-driven cars from the Judges stand, through the field, before coming to rest at the 'Car of Al Unser., Sr.' class. The car he drove on the show field was a Lola T332, which he and Mario Andretti had driven from 1974 to 1976. Other cars on display included a King Champ Dirt Car, two PJ Colt Indy Cars, a Vel-Parnelli VPJ-2 IndyCar, an Eagle Indy Car, a Chevy Camaro IROC Z28, a Porsche 962, Penske-March 85C, and a Porsche 2708.

Jaguar D-Type
Fourteen examples of the Jaguar D-Type and XKSS were invited to Amelia to celebrate the 60th anniversary of its third consecutive and final victory in the 24 Hours of Le Mans, the race it was created to win. It's hard to conceive of a more iconic sportscar of 1950s Le Mans than the D-Type Jaguar. From the tragic 1955 race to a run of dominance that would continue throughout the end of the decade, there was no denying the greatness of the creation from the small Coventry factory.

From 1951 Jaguar won the 24 Hours five times in seven years. That competition record spurred Jaguar sales and invested the Coventry-based company with an international luster and a mystique it still enjoys.

Even after six decades the D-Type Jaguar remains one of the most alluring automotive shapes of all time. Its sculptured aerodynamic silhouette employs modern aircraft design theory and construction. In four years (1954 through 1957) the D-Type won the 24 Hours of Le Mans three times. It is a record that stands with the fabled Bentley Boys of the 1920s, Britain's first Le Mans heroes.

'The D-Type is a classic sports racing car that gets extra credit as the car that not only won Le Mans three times, but gave birth to two more Jaguar classics, the XKSS and the XKE,' said Bill Warner. 'We are honored to have both the 1956 and 1957 Le Mans winning D-Types anchor our 2017 Jaguar D-Type class.'

Royal Camaro's Golden Anniversary
The world's biggest and most powerful auto maker, General Motors, scrambled to make a product that could compete in the wake of Ford's Mustang - a car that was in a class of one. What they came up with was a prototype shape that spent eleven days in the Ling-Temco-Vought wind tunnel outside Dallas, TX. The tunnel really liked the shape of the new Chevy. The formal name for Chevy's new sporty car came from a 30 year old French/English dictionary: Camaro meant 'pal', 'comrade' or 'warm friend.'

'The Camaro brought affordable world class design to American car showrooms,' said Warner. 'When experts, critics and even competing designers compare a mass production design such as the Camaro to a Ferrari Lusso you know you've struck gold.'

The centerpiece of the 22nd annual Amelia Concours Camaro class was Camaro Number One, the gold 1967 coupe VIN number 10001. Also in the class were 1968 and '69 Yenko Camaros, a 1969 Indy 500 RS/SS Pace Car, a 1973 Baldwin Motion Camaro plus a COPO Camaro and several significant generation one and two Camaros.

Famous Movie Cars
A full class of famous Movie Cars triggered memories of sitting in a dark movie theater, or, better yet, a driven-in, daydreaming about a famous, or, perhaps infamous, movie car.

Nine cars made famous by feature films from 1964 through 1988 triggered fresh nostalgia at The Amelia. Selected as the Best in Class by the judges was the 1964 Aston Marin DB5 owned by Harry Yeaggy of Cincinnati, Ohio. It is the only movie car left of the original two cars used in the movie Goldfinger and was driven by Sean Connery. Instantly recognizable from Timbuktu to the smallest island in the Pacific, this car is largely responsible for Aston Martin's success as one of the world's most exciting brands.

The Cars of Brumos Racing
From its founding on September 1, 1959 Brumos Porsche Car Corp (later Brumos Porsche) represented the legendary Stuttgart marque in North America winning 15 major championships plus the Rolex 24 Hours of Daytona and the 12 Hours of Sebring multiple times.

'This is a meaningful way to salute Peter, Hurley, Jack Atkinson and Bob Snodgrass as well as all the drivers and crew members who made Brumos #59 so successful in racing through seven decades,' said Dan Davis, 'I'm honored to have been part of Brumos for the last 25 years and appreciate the effort and dedication of our people who support Brumos racing.'

What the judges selected for 'Concours d'Elegance' was a 1935 Duesenberg SJ owned by Terence Adderley of Bloomfields Hills, Mi. It is one of the last two Torpedo Phaetons built by the A.J. Walker Company to the Gordon Buehrig design specifications. It was originally delivered new to E.L. King of Winona, Wisconsin as J-558 on chassis #2558. Mr. King was apparently not satisfied with the car and Duesenberg agreed to replace the complete chassis and engine. The original body was installed on chassis #2608 with engine J-582.

The 'Concours de Sport' was awarded to a 1939 Alfa Romeo 8C 2900B Lungo Spider owned by the A. Dano Davis Collection. Approximately 32 of the 2.9 chassis were made and it is believed only 12 are Touring Spiders, seven of which are the long chassis like Mr. Davis's car. Its known history starts in 1949. It was raced by Mario Travares Leite in Sao Paulo with success in 1949 and 1950 after which the car disappeared. When it re-appeared years later, it had a Corvette engine installed and the chassis was modified. Some four decades later, it was re-united with the original Touring coachwork and a proper engine.

Each individual who visited the Amelia Island Concours was able to cast a vote for their favorite vehicle. The vehicle that receives the most votes is awarded the duPont Registry's People's Choice Award. This year, that honor was bestowed to Sam and Emily Mann of Englewood, NJ for their 1937 Delahaye 145 by Franay.

The Chairman's Choice Award, for the car found most appealing by the chairman, was the 1941 Cadillac Custom Limousine 'The Duchess' owned by Steven Plunkett of London, ON, Canada.
Galleries
Cars of Al Unser Sr.
Jaguar D-Type 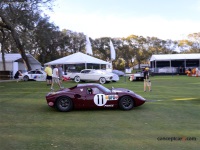 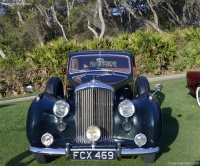