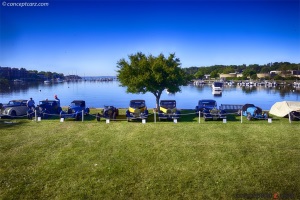 June 2017
As the American-built cars rolled off the field on Saturday, it was time for the International cars to shine at the 22nd annual Greenwich Concours d'Elegance. The two-day concours had over 250 vintage cars, classics and modern supercars on hand, with 125 cars and motorcycles on the field for each concours day at Roger Sherman Baldwin Park in Greenwich, Connecticut.

One of the features was the American Bugatti Club display, with more than 20 examples in attendance, overlooking Greenwich Harbor on the Long Island Sound. A 1938 Bugatti Type 57C Atalante, which had sat idle in a garage for 45 years before it was beautifully restored and shown by a private collector, took home the trophy for Best in Show International. Myron Schuster's 1937 Delahaye 135M Competition Short Wheel Base Roadster was the winner of the People's Choice International.

Along with Bugatti, Ferrari also received its own group with an eclectic mix of modern and vintage cars from the company's long and storied past. The earliest example was a 1953 Ferrari 166 MM Competizione Spider with coachwork by Autodromo. Its resume includes racing at the Mille Miglia among other outings, and playing a staring role in the movie The Racers. Modern supercars included an F40 and a LaFerrari.

Another feature at this year's event were racecars from the Lime Rock Historic Festival.

Since its inception, the Greenwich Concours has donated its proceeds to support Americares, a health-focused relief and development organization that responds to people affected by poverty or disaster with life-changing medicine, medical supplies and health programs.
Galleries
Bugatti