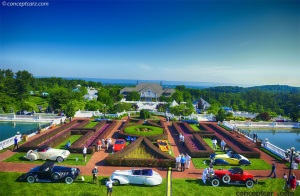 June 2017
The Elegance at Hershey is like a box of chocolates. You never know what you're gonna get. The show focuses on elegance, and the well-curated garden party attracts some of the finest creations that ever put rubber to the road. Since there are no featured marques, categories, themes, or celebrated anniversaries, it's always a mystery as to what vehicles or types of vehicles will be on display.

There was little deviation from the 'elegance' theme. The VerValen Special and the Porsche 906 on display were purpose built race cars, but undeniably elegant. Post-War Sports/Racers in attendance included the Ferrari 212 Export, Ferrari 166 Inter, Siata 300BC, Allard J2X, Kurtis 500SX, Shelby Cobra, and AC Bristol. Although their impressive engines shoe-horned into the compact engine bays are often topics of discussion, it was their classic lines and gentle sloping curves that awarded them an invitation to The Elegance.

It is always a pleasure to see concept cars in attendance at these type of affairs. The red Plymouth XNR Concept, designed by Virgil M. Exner, was presented in 1960 as Mr. Exner's dream for a sports roadster. Unlike most concept cars of the era, this one was meant to be driven. Barely 43-inches high, the car was ultimately clocked at Chrysler's high-speed proving grounds in Michigan at 152 mph. Ultimately, Chrysler decided there was just no market; even if there had been, the styling would likely have seemed just too far out to sell well. Exner's abrupt firing in 1962 killed any chance the design might have had for being refined into something more practical for production.

Perhaps the most flamboyant car in attendance, the Talbot-Lago T150C, was also one of the most elegant. It has coachwork by Figoni & Falaschi and is similar in style of the 1936 Paris Auto Salon Delahaye. It is one of the most striking designs of the coachbuilding era. Its signature features include the sweeping pontoon fenders, low windscreen and intimate seating for two. The car appears in motion while standing still. At the end of the day, it was awarded with The Hotel Hershey Award.

The Three P's of Automotive Luxury were well represented at this year's event. At least 11 Packards, 2 Pierce-Arrows, and one Peerless showcased why they were among the most coveted cars of their era.

In recent years, Preservation has become a popular topic in the collector car community. The Elegance highlighted the importance of preservation by displaying a 1924 Isotta-Fraschini Tipo 8, an Shelby Cobra, AC Bristol, and a Bugatti Type 57. The Isotta-Fraschini Tipo 8A took home the well-deserved FIVA Presentation award. It is the earliest known Tipo 8 Series extant and may likely be the first of that series produced. It remains, incredibly, in unrestored, original condition. It was first bodied by Cesare Sala of Milan. In 1926, it received solid side-mount covers and special interior fitments by Carrozzeria Riva.

The People's Choice was awarded to the 1929 Cord L-29 Cabriolet. It was one of two Cord L-29 models in attendance. It was a styling sensation with its low, sweeping lines on the low-slung chassis made possible by its innovative front-wheel drive. From 1929 to 1931, Cord produced a total of 5,014 L-29 models, the first mass produced front-wheel drive American automobile. The economic depression effectively killed the Cord's chance of success as a product slotted between the popularly priced Auburn, and the high-end Duesenberg.

The Governor's Cup (aka Best of Show) was bestowed upon the 1934 Packard 1106 (Twelve) Runabout Speedster by Lebaron, owned by Bob, Sandy & Gary Bahre. The Lebaron-bodied Packard Speedster is arguably one of the most spectacular Packards of all-time. Just four were known to have been produced when new and all four remain extant today. The Speedster combined Packard's shortest wheelbase with its 160 horsepower V-12 engine, and stunning coachwork from LeBaron of Detroit. Included was a raked vee-windshield, long hood, boattail rear end, and pontoon fenders with skirts on the rear fenders and wheel covers over the wire wheels - all of which added up to one modern and sleek automobile.

The Bahre's Packard was originally owned by actor Clark Gable. Upon his purchase, Gable sent the car to Bohman & Schwartz of Pasadena, who further modified the car with stylish teardrop step plates in lieu of running boards and a further reduction of the windshield height, thus lowering the profile of the car. The Bahre's have owned the car since the late 1970s.

Established in 2010, The Elegance at Hershey once again brought together some of the world's finest collector cars to 'The Sweetest Place on Earth.'
Galleries
PreWar