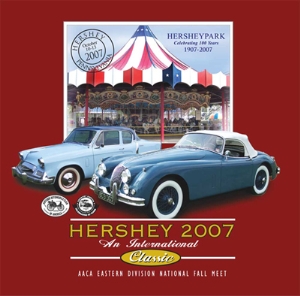 October 2007
The Eastern Division AACA National Fall Meet takes place each year during the 1st full week in October. The Hershey Region began hosting the show in 1955 and has done so each year since then.

The meet is located in beautiful Hershey, PA on the Hershey park and Giant Center parking lots and surrounding grounds. The show is considered one of the largest antique automobile shows and flea markets in the United States.

It consists of over 9,000 flea market spaces, over 1,000 car corral spaces, and approximately 1,500 show cars. Each year the show attracts visitors from all over the United States and many countries throughout the world. Some of the most unusual cars and parts can be found at Hershey.

Car Corral
There are many ways to sell an automobile and one method that usually has a very high success ratio is the 'right-place, right-time' theory. For many, that means bringing their automobile to the Hershey Car Corral where they are joined by other sellers hoping to attract the right buyer. With the many activities that transpire during this time, and sitting in the vicinity of the automotive flea market, the cars receive lots of foot traffic. One of the requirements of the car corral is that the vehicle must be 24 years or older and must be AACA eligible. No flea market items, customs, replicas, street rods, or modified vehicles are allowed. The cars must be driven into the Car Corral and all transactions are between the buyer and seller.

Most of the cars offered for sale were from the domestic market, many from the 1950-1970 era. Still, there was enough flavor to satisfy nearly any interested buyer - or wandering car enthusiast. One such vehicle was the 1972 Pontiac GTO 'Dealer Tribute'. It had been ordered by the original owner to GTO Specifications. In 1972 the GTO only came as a hardtop or 2 dour pillar coupe. The owner wanted a GTO convertible so they ordered the GTO package from the factory individually for dealer installation. The result was a unique and numbers matching vehicle that has gathered many trophy's over the years. Most of the cars hovered around the $10k - $40K range. Two of the more expensive vehicles were from the same stable, a Duesenberg and a 4.5-liter Bentley. Both were expensive, yet understandably so, with sticker prices over a half-million dollars.

A pre-World War I Marmon was up for sale and its history is known from new. The original owner was Howard Marmon himself. It was treated to many improvements over the standard models by Mr. Marmon, such as the 354 cubic-inch engine which produces about 20% more horsepower than the stock engine. There was a 1948 Jaguar 3.5-liter Mark IV that was in need of some 'TLC.' It is a brilliant vehicle but one that was in desperate need of a restoration.

Many of the vehicles were from the Muscle Car era, such as the GTO, Chevelle, Torino, etc. As government regulations and safety concerns began to silence the roar of the quarter-mile demons, large and luxurious became the preferred body style. The cars would continue to grow in size, such as the Cadillac DeVille, Lincoln Continental, Pontiac Bonneville, and others in the years to come, until their popularity quickly declined due to the energy crisis. Seeing the drastic differences between the 1950s, 1960s, and 1970s is always intriguing, and having the opportunity to purchase a vehicle from this Car Corral 'smorgasbord' is a convenient way to 'shop-and-compare.'

A popular word that adorned most of the vehicles was 'rare.' Many of the vehicles were rare with only a few examples ever created. For some of the others that were claimed to be 'rare' it took a little extra research to figure out why the owner made the claim. For example, some were 'rare' due to the color combination plus the list of options selected when new. 'It', for example, may have been one of many thousand produced during that year, but since it was (i.e.) green, 'it' was one of about 10 - thus the claim: 'rare.' Though it may not be rare in the traditional sense, it would be a unique experience to own a vehicle that is distinctly different from any other on the roadway.

Conclusion
The weekend was frequently visited by rain or 'sprinkling', which did not seem to slow down the buyers or the sellers. This was a nice activity to the very busy weekend. The AACA Museum had their special display which attracted many spectators; the flea market had nearly every automobile accessory ever created, which made this a 'goldmine' for those doing restorations. There were auctions throughout the weekend, the annual AACA National Fall Meet, concerts, dinners, and more. Many of the vehicles that entered the Car Corral left under new ownership.
Galleries
1913-1932