Concours d'Elegance of America At The Inn At St. John's 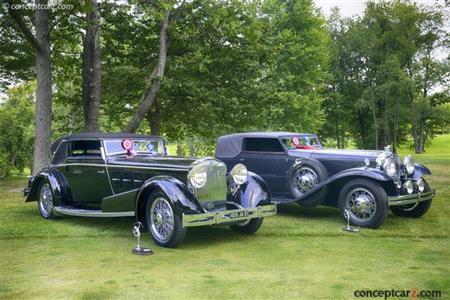 July 2017
The 39th Annual Concours d'Elegance of America paid tribute to many special features, including Rolls-Royce Silver Ghost, Can Am Challenge Cup, Cobra, Murphy of Pasadena, Jet Age Juniors, along with an outstanding assortment of Classics and early Brass Cars.

Arturo and Deborah Keller were selected as this years 'Collectors of the Year.' They chose to highlight their collection by bringing a selection of Aerodynamic Coupes to this year's Concours d'Elegance of America. Five vehicles from their private collection were on display, marking the first time all five of these vehicle have been shown together in public.

The 'Enthusiast of the Year' was Ralph Gilles, Head of Design, FCA Global. To celebrate, he brought a selection of cars including his 2016 Dodge Viper ACR Extreme, several past FCA concept cars, and his Alfa Romeo 1900 SS Zagato. Gilles said, 'the vehicles I selected for the Concours d'Elegance of America prove that while function is important, form truly follows passion.'

Murphy of Pasadena
Murphy Inc. was based in Pasadena, California. Their initial reputation stems from their work with Packard Automobiles. The trademark design of the Murphy Company was their 'clear vision' pillar which were pillars designed to be as slim as possible to personify a sporty appearance for the vehicle.

The Concours d'Elegance of America showcased the talents of Murphy by displaying nine vehicles wearing their coachwork, including six Duesenbergs, a V16 Cadillac, and two Packards. Although built for different manufacturers and customers, the commonality and various similarities were able to appreciate as they sat shoulder-to-shoulder on the snowfield.

Gassers
The Concours d'Elegance of America stayed true to its name by showcasing many vehicles and designs that were birthed on American soil. One such featured class were the competition cars known as 'Gassers' which were built in the 1950s and 1960s, often on a shoe-string budget. These vehicles redefined creativity and ingenuity and earned their name by using common gasoline instead of racing fuel. These vehicles were distinguished by their solid front axle, raised front end, and often the relocation of weight as far back as possible. These vehicles helped establish the foundation of drag racing from stop light to stop light, and a quarter-mile at a time.

Jet-Age Juniors
Another uniquely American class was the Jet-Age U.S.-made compact cars built from 1960 through 1963. Many of these cars were built in response to the economic downturn of the late 1950s and the growing popularity in smaller European built cars such as the Volkswagen Beetle. Ford response was the Ford Falcon which resulted in over a half-million sold, a first-year record for any car. It featured a lightweight unitized construction, a 144 cubic-inch six-cylinder engine, and excellent fuel economy. Body style choices included a coupe, sedan, and wagon with prices starting at under $2,000.

Virgil Exner penned the 1960 Valiant for Chrysler, and give it swoopy fender lines, airy six-window greenhouse, and an attractive grille that had similarities to the one found on Mercedes. Chevrolet went off in another direction, with their rear-engine Corvair, in similar fashion to the Volkswagen Beetle. Ingenious engineering such as the aluminum 'flat six' and a fully independent suspension helped it make the cover of Time Magazine and earned Motor Trend Car of the Year honors.

Mercury stretched the Falcon, improved upon its styling and standard features, and called it the Comet. It quickly became the best-selling vehicle that Lincoln-Mercury had to offer. Dodge's new compact entry for 1961 was the Valiant-based Lancer. Previously, the Valiant had been retailed by Plymouth, Dodge and Chrysler dealers, but for 1961 it officially became a 'Plymouth'.

The judge's favorite at the concours was the 1962 Oldsmobile Jetfire Coupe. A performance version of the Olds F-85, the Jetfire was the first American car to feature an aluminum turbocharged V8 engine. It would be offered for two years only, 1962 and 1963. The Jetfire coupe was fitted with deluxe satin-finished exterior moldings, special wheel covers and a stylish convertible like roofline. The Jetfire interior was equally impressive, with all-vinyl front bucket seats and a center console with a special 'Turbo Charger' gauge. Just 3,765 Jetfire Sport Coupes were built in 1962.

Can-Am Challenge Cup
Sitting in close proximity to the Drag Racing 'Gassers' was the Can-Am class. Although different in appearance, their formulas were simple - both were products of extreme experimentation where winning was the primary goal. The Can-Am Challenge Cup Series spanned two countries and was created by the SCCA in 1966 in conjunction with the CASC. This Canadian-American racing series would last until 1974 and would see some of the most extreme racing cars ever created. With few rules, extremely powerful engines, lightweight race cars, and skilled drivers, this was arguably the greatest motor racing era ever with some of the most powerful race vehicles ever assembled.

The concours celebrated this exciting time of motor racing by displaying several vehicles from McLaren, Porsche-Audi, Chinook, Lola, and Shadow. The judges chose the Porsche 917/30 as their favorite. It is one of two 917/30's sued by Team Penske during the Can-Am Challenge series in 1973. Mark Donohue drove the car and captured the 1973 Can-Am Championship. It not only won races, it dominated. Mark also set a closed-circuit record of over 211 miles per hour at Talladega Raceway.

Rolls-Royce Silver Ghost
Rolls-Royce produced the Silver Ghost from 1907 through 1926. Originally named the '40/50 HP' the early examples were produced at the company's Manchester factory, before moving to Derby in 1908. Beginning in 1921, Rolls-Royce also built these elegant automobiles in America in Springfield, Massachusetts.

The Silver Ghost was introduced when horses were still the preferred mode of travel and automobiles were loud, smelly and unreliable. Henry Royce and C.S. Johnson of Rolls-Royce, Ltd. unveiled a one-of-a-kind, whisper quiet 40-50hp legend, the 'Silver Ghost.' Up to 1906, the most powerful engine Rolls-Royce had ever produced was a 30hp, six-cylinder giant - woefully underpowered considering its seating capacity; there was room to ferry the entire family to the countryside for a Sunday picnic. But the 40-50s, as they were known were different. With a body balanced high over a silky-smooth, transverse leaf spring and a drive-train powered by a huge but silent seven-liter, six-cylinder inline block, the Silver Ghost broke world endurance and mileage records.

Best of Show
The Concours of America celebrates two 'Best of Show', one Foreign and one American. The judges selected the Stutz DV-32 Convertible Victoria owned by Joseph and Margie Cassini as their favorite 'American' car. The 'Foreign' Best of Show winner was the Isotta Fraschini Tipo 8A owned by The Patterson Collection.

Astonishingly, both cars have a similar sporty profile and similar Convertible Victoria bodystyles. Both have long hoods, and a short/raked windshield.

Stutz DV-32
In the early 1930s, Stutz doubled the number of valves per cylinder in its engine resulting in a boost of horsepower by 40-percent from the base motor. It was known as the DV-32 for its 32 valves, and it was used to power vehicles that were adorned in an array of bodies.

The Cassini's Stutz features a radically raked and shortened folding windshield design, the longest Stutz hood (lengthened by more than 6-inches), and a set-back firewall. The coachwork is by LeBaron and much of the ownership history for this car is known. It was originally imported to Argentina for Stutz distributor Luis Angel Firpo. In 1974 it was sold to a collector in Florida who kept it for several years before selling it to a gentleman in Ohio. The present owners were able to acquire it in 2008 from the Bool's estate. They commissioned a full restoration returning it to its original glory.

The Cassinis have Best of Show at this event (and many others) on several occasions, their most recent was last year with their Packard 1108.

Isotta Fraschini Tipo 8A
The Isotta Fraschini automobile bears the name of its founders, Cesare Isotta, and Vincenzo, Oreste and Antonio Fraschini. Before the Milanese friends and brothers founded Automobili Isotta, Fraschini & Company in 1900, they assembled Renaults.

They were among the early pioneers of the overhead camshaft engine, with an engine designed by Giustino Cattaneo. Isotta Fraschini introduced the Tipo 8, the first production automobile to be powered by a straight-eight engine, at the Paris Salon in 1919 and began delivering them to customers in 1920.

Debuting in 1924, the Tipo 8A replaced the Tipo 8 of 1920-23. The derivative 8A engine featured a larger 7.4-liter displacement and was significantly more powerful. Overall, the 8A set new benchmarks for automotive magnificence. Between 1924 and 1932, a total of 950 8A chassis were produced.

In 2016, the Patterson Collection was the featured 'Collector of the Year' and one of the car's they brought was their Isotta Fraschini Tipo 8A (for display only; not judged). It won Best of Show at the Pebble Beach Concours d'Elegance in 2015 and when it rolled onto the Concours of America at St. Johns this year, it was clearly one of the most elegant 'Foreign' car on the show field.

Its 145-inch wheelbase Tipo 8A chassis was clothed by Swiss coacbhuilder Carrosserie Worblaufen. The result of Worblaufen's blending of Swiss elegance with Italian engineering was first displayed at the 1932 Geneva Auto Show. The car went on to win the Grand-Prix d'Honneur at Cannes in 1933.

It has a long hood and an ultra-low windshield, combined with a closed-quarter cabriolet top, large trunk and double spares at the rear. It has had just four owners since new. It was quietly kept in Switzerland and France prior to its 2014 arrival in the United States. A complete body-off restoration has since been carried out.

About
The Concours d'Elegance has its roots in 17th century France, when the aristocracy would parade their horse-drawn carriages through the parks of Paris. With the advent of the automobile, Concours d'Elegance events evolved into competitions between automobile manufacturers, custom coachbuilders, and owners, whose vehicles were judged on the beauty of their design. The Concours d'Elegance of America originated at Oakland University's Meadow Brook Hall, the historic home of Matilda Dodge Wilson, widow of automotive pioneer John Dodge. In 2011 this world-class event moved to the beautiful grounds of the Inn at St. John's in Plymouth, Michigan.

With the support of the board of directors, collectors, volunteers and patrons the Concours has given back to the communities who have supported this event. Throughout the 39 years the Concours d'Elegance of America has been dedicated to philanthropic efforts contributing over $5M to; the restoration of Meadow Brook Hall, JDRF (Juvenile Diabetes Research Foundation) and many other charitable organization in our community.
Galleries
Collectors of the Year

Enthusiast of the Year : Ralph Gilles 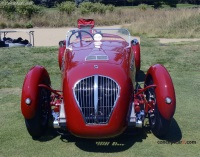