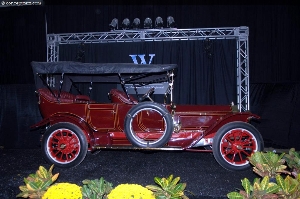 November 2007
Nestled in the heart of sunny South Carolina and just miles from the Atlantic Ocean was the Sports and Classic Car Auction presented by The Worldwide Group. Over 100 vehicles were listed for sale and as the gavel struck for the final time of the day, around 90% had been sold. A large number of the vehicles, around 40 of them, were from a single collection, being auctioned from the estate of the late Walter B. Satterthwaite. Mr. Satterhwaite was a passionate collector who had acquired an impressive stable. The auctioning of Mr. Satterhwaite's collection was a fitting memorial to a great admirer of the automobile and an opportunity by many to enjoy his collection once again.

With over 100 vehicles for sale, the group was well diverse, containing cars from many eras of automobile production. A large amount were from the 1950s and 1960s, which were a glorious period for styling and horsepower advancements. In the horsepower sports-car department, there were around 15 Corvettes, Mustangs, and Thunderbirds combined. Stumbling upon a Peerless automobile is a rare occasion; the Worldwide Group Auction had three. From across the pond their were the Austin-Healeys, MG's, Jaguars, Lotus, and Triumph's, to name a few. Porsche, Volkswagen and Mercedes-Benz made up the German contingent with the 356A 1600 Speedster being the highlight from this group. In the modified category there was a custom Ford Model A Boattail Roadster 'EJ Walton Special' made from aluminum with extensive modifications throughout. There was a Shelby Cobra 429 Tribute equipped with a Ford V8 engine and many convenience features such as an automatic gearbox and factory air conditioning. In the 'all-terrain' category there were three Jeeps and one Willy's Jeepster.

A very broad selection of vehicles that nearly guaranteed to satisfy the need, no matter what it might have been.

The Sale
Many of the vehicles offered for sale were without reserve, which meant there was a higher probability the cars would be sold and the potential for the buyer to get a fantastic deal. It is a gamble, as the seller must hope a suitable number of interested buyers would be in the crowd willing to drive up the price. Most of the cars sold were below the estimated value, which either means the estimates were too high, or that the buyers were rewarded with a bargain. This is not all that unusual, but it should be encouraging for buyers coming to next years auction.

The average price was around $48,300 with the highest sale being the 1953 Chevrolet Corvette, selling for $440,000. The lowest sale of the day was the Chrysler LeBaron, netting $2,475. In most instances, the vehicles that crossed the auction block were bid on by more than one bidder. Total sales were estimated to be around $4.5 million.

The Vehicles
There was a wide variety of cars, Jeeps, and trucks with even a few modified and custom creations. Ford and Mercury's were the most frequent vehicles to cross the stage, totaling over 30. Including another Ford sibling, the Lincoln marque, the number reached nearly 40. The most anticipated cars were the 1909 and 1912 Peerless models. These were the highlights and crossed the block one right after the other. The first to the stage was the unrestored, very original, 1909 Peerless Model 19 30hp Seven-Passenger Roi des Belges. It is a car that will rival the 'Preservation Category' at any concours it attends. This gorgeous piece of history is one of only two known Model 19 Peerless from 1909, the other being a restored example. Its 410 cubic-inch four-cylinder T-head engine is still in working condition, as is most of its other mechanical components. The other highly anticipated car at auction was the 1912 Peerless Model 36-Six 48 Horsepower Seven-Passenger Touring. It was night-and-day, as the 1909 was original and the 1912 was immaculately restored. The 1912 Peerless is outfitted with a 578 cubic-inch six-cylinder T-head engine. It has a history that is known since new, is a very rare automobile, and its presence is felt wherever it goes.

Sadly, both of these Peerless models left the auction unsold. Bidding was intense, but not enough to secure new ownership. This could be a good thing if your in the market for a Peerless; drop the nice folks at the Worldwide Group an email informing them of your interest. We would love to see these vehicles on the concours circuit.

The first year of production for the Corvette was 1953; this was Chevrolet's entry into the 'sports car' market which was being overrun by the sensation European vehicles such as Jaguar's E-Type. Chevrolet would produce just 300 convertibles in 1953, making them the most rare of all Corvette production years. The gorgeous Corvette Roadster offered for sale was the high seller of the day, selling for $440,000.

One of the rarest cars on auction day was the Dodge Coronet Super D-500. As it came onto stage it became the only known public offering of a numbers matching factory ordered 1958 Dodge Coronet Super D-500 Convertible to be up for auction. In modern times, there are only 11 known to exist. The Super D-500 had a highly tuned 361 cubic-inch V8 engine that produces 325 horsepower. It has a beefed-up suspension, large brakes, and performance modifications throughout. There are few distinguishable markings to identify the Super D-500 from the base Coronet, making them the ultimate 'sleeper car.' The high-end of the estimated value was $175,000; this car was sold for 220,000 making a mockery of the estimates and making the seller a very happy individual.

A few of the cars on auction day had been prior participants at the Hilton Head Concours d'Elegance. The Packard 120 Convertible Coupe and the 1938 Cadillac V-16 Divider Window Convertible Sedan by Fleetwood had both graced the lawn at the Coastal Discovery Museum at Honey Horn. The Packard is finished in a stunning Royal blue exterior with Navy Blue top. It has been treated to a restoration and traveled less than 200 miles since that time. The car was sold for $72,100. The V-16 Cadillac has a Fleetwood body and a unique divider window special ordered by its original owner, MGM Studios. Only thirteen examples of the Convertible Sedan were constructed, with many going for Government use. The V Cadillac on auction day was the transporter of many movie stars, adding to the allure and ambiance of the vehicle. It was sold for $286,000.

The height of the muscle car era was during the close of the 1960s. Ford's serious contender for quarter-mile contention was their Boss 429 Mustang, which saw just 859 units produced. The car was so well equipped only one option was offered, the color. The engine was conservatively rated at 375 horsepower and was designated strictly a racing motor, commonly referred to as the 'NASCAR' motor. The wide stance and intimidating hood scoop made this a very aggressive vehicle. This was expected to sell for as much as $500,000 but it would leave the auction unsold.

Conclusion
There were over 100 vehicles up for sale and around 90% finding new ownership, a strong indication that the collector car industry continues to see growth. It also indicates that the cars assembled by the Worldwide Group Auction for the visitors to the Hilton Head Concours d'Elegance were the appropriate style and genre.

The Worldwide Group Auction was held on the same day as the Hilton Head Car Club Jamboree and the day prior to the Hilton Head Concours d'Elegnace. Meaning there were large crowds frequenting the auction throughout the day. It was a very well run and entertaining event for spectators, buyers, and sellers.
Galleries
1909-1937