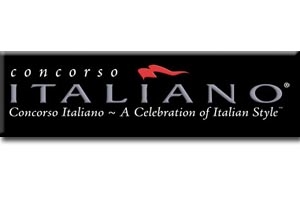 November 2007
During the Monterey Weekend there are numerous events to attend with many centering around the word, 'exclusive.' The Concorso Italiano could fall under this category, in that it is an event for vehicles that were created from the boot-shaped country of Italy. That is where the exclusivity stops and the warm-welcome's begin. Any Italian built car that is able to make it the Monterey Peninsula and to the Blackhorse Golf Course in Seaside, California is able to be shown. The two marque's in strong attendance were Ferrari and Lamborghini, with many others such as Fiat, DeTomaso, ISO, Alfa Romeo, Lancia, Bizzarrini, and Maserati also having significant numbers.

With a show of this magnitude, there were many celebrated models and features. The Countach was recognized for its 35th anniversary. Many examples were on display that spanned the years of production, allowing onlookers to examine the differences that were introduced each year. The most significant Countach on the well-manicured golf course lawn was the first example ever created. Lamborghini's test driver, Valentino Balboni, was present to share stories and experiences about the stages of development for the Countach.

Probably the most interesting Lamborghini in attendance, and arguably one of the highlights of the show, was the Miura Roadster, also known as 'ZN-75'. This car began life as a prototype and given the unique feature of a removable top. The car was later purchased by ILZRO (International Lead and Zinc Research Corporation) and reconstructed using their own metals and technology. The vehicle was disassembled with many of the parts receiving zinc plating, chrome plating, polished or re-manufactured using metals made by ILZRO. At the completion of the project, the car's name was changed to 'Zn-75' signifying the periodic table of metals used during the reconstruction. It is a breath-taking car that is exotic as it is intriguing.

Lamborghini may not have the history or the racing pedigree of Ferrari, but they have accumulated a strong following of enthusiasts and admirers throughout the years. Their ability to create attractive and stunning vehicles coupled with potent powerplants have made them famous and successful. The Concoros Italiano had many Lamborghini's from the very early years of their existence to the modern masterpieces that can be found in showrooms throughout the world. In attendance were the 350 GT and 400 GT, The Miura, Islero, Jarama, Espada, Urraco, Silhouette, Countach, LM002, Countach, Diablo, Murcielago and Gallardo. The list of entrants encompasses nearly every production model ever produced by the raging-bull marque. The same could be said for many of the other marque's in attendance. For Ferrari, it was the typical sea-of-red with most of the displays centered on the production based, road going, vehicles that wore the symbol of the Prancing Horse - and of course the 'Dino' which was a Ferrari vehicle but lacked the Ferrari logo. This year the Concorso celebrated the 250 GT Cabriolet and California Spyder.

Another marque celebrating a 50th anniversary was Maserati with their 3500 GT. The Maserati history is very deep, beginning in the early 1910s with their early existence solely based on racing. Their success on the track was later translated into powerful road-going cars that continue to be in high demand in the modern era. The Maserati 3500 was a very important model for the marque, as prior to its existence less than 140 cars had been constructed in a ten year time span. Racing and competition nearly exhausted the funds; the company needed help. Becoming a mass-produced company and the widely accepted 3500 GT saved the company and allowed for Maserati to continue its racing efforts. The 3500 GT was an elegant car that came in many different flavors with coachwork by such legendary greats as Vignale, Allemano, Frua, Moretti, Bertone, and Boneschi. They were impressive cars, both visually and mechanically and Maserati's first production car built in significant numbers.

A Cisitalia 202 SMM Spider Nuvolari on display was a fitting example of the Cisitalia (Consorzio Industriale Sportivo Italia) company created by amateur racer Piero Dusio in the pre- and post- WWII era. The car wears the name 'Nuvolari' in its title in honor of the legendary racer, Tazio Nuvolari, who drove a Cisitalia roadster to a very impressive second place finish in the 1947 Mille Miglia. Another significant distinction surrounding this car is being the first to incorporate a space-frame construction in a sports car.

Many impressive coach-built vehicles, including those by Pininfarina, Ghia, Touring, Zagato, Bertone, and more, were on display. An example was the Nash-Healey LeMans Coupe which carries coachwork by Pininfarina of Italy. The design was by Donald Healey in England with the drivetrain being supplied by Nash. At the 1952 Lemans a Nash-Healey took first in class. A total of sixty examples were created with production lasting only a short time. It is an excellent example of English, Italian, and American talent. Another marque that fit this mixed heritage were the De Toamso's which has styling by Ghia, a Ford powerplant, and the result of Argentinean racing driver, Alejandro De Tomaso. Curious, would the Cadillac Allante or the Hyundai Tiburon, both examples of Pininfarina's design expertise, be allowed onto the show field?

The coveted 'Best of Show' went to a Ferrari 275 GTS owned by Tazio Denicola of Saratoga, FL. This marked the first time a Ferrari has won the award in several years. Only two-hundred examples of the 275 GTS were ever constructed. They were created as the successor of both the 250 GT California Spyder and the 250 GT Cabriolet. The 'Best of Show' was a well earned award and one that should make the vehicles owner, Tazio, very proud considering his car beat many other suitable and deserving vehicles.
Galleries
1920-1964