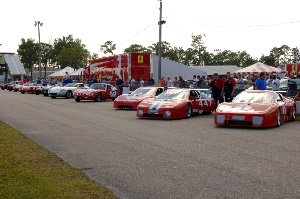 January 2008
The Start of the Cavallino Classic Celebration

Enthusiasts from all over the country and the world make the annual journey to the West Palm Beach area during January to watch and partake in one of the largest Ferrari automotive gatherings in the country. The Cavallino Classic, now in its 17th year, attracts more than 500 registrants with around 400 cars from 33 states and 12 countries. The Palm Beach area is a suitable location as its warm weather and gorgeous beaches only heightens the allure. Recently, additional events have been added to the weekend making attendance irresistible.

Enzo Ferrari's company, along with his early racing career, was centered around racing. His road going cars were initially created to finance his track efforts. It is only appropriate that the day-long Cavallino Classic celebration is precluded by four-days of racing, the first two being completely private and closed to the public. This event is for cars that bare the prancing horse emblem; a select few Alfa Romeo and Maserati's are also welcome because of their association with Ferrari. Many of the cars wore license plates, meaning they were street legal. A few were driven to the track, raced, and driven home, especially in the GT and Sport group. This was a fitting tribute to the versatility of the Ferrari marque.

The Shell Ferrari/Maserati Historic Challenge, commonly known as the Shell Historics, is divided into two groups, one for earlier cars with drum brakes and the other for later disc brake vehicles. Within these two groups, there are several classes as the vehicles that compete range drastically in performance capabilities and era's of construction. The first race of the season is held at Moroso Motorsports Park located in North West Palm Beach County, in Florida. The track is a 2.25-mile ten-turn road course that offers high-speed driving coupled with varying degrees of cornering, braking and acceleration.

There are two driving groups, designated GT and Sport, with the Sport being the faster of the two. The GT group is for general drivers who want to drive their Ferrari at speeds on the track. The Sport group is for the serious and experienced driver who have been to a high speed driving school. For the actual race, both groups were combined into one event.

Race Results
Both Drum and Disc groups of racing are exciting to watch. There are clear rivalries that have fostered throughout the years which makes for very entertaining racing. In the drum brake group it was Peter Giddings and his Maserati 250F who led the race. As the flag signaled the start of the race and the season, Giddings quickly distanced himself from the rest of the pack. He would finish the race in the same position he started, a common result for his very capable 250F. Second place was secured by the Maserati 300S driven by Jon Shirley followed by Ed Davies in a gorgeous Ferrari 375 MM Spyder. The oldest car on the track by more than a decade was the Alfa Romeo 8C/35, driven very skillfully by Peter Greenfield to an impressive 7th place finish and the final car to finish 12 laps. The next four finishers completed eleven laps. The Alfa was the sole example on the track from that marque, whereas Maserati's were the majority with eight entries qualifying for the race. The Maserati 250F and the Alfa Romeo were the only monoposto's circling the track in the drum brake group. The remaining Maserati's were in spyder configuration and many of the Ferrari's were in coupe configuration.

Six of the drivers in the Drum Brake group had qualified for the Disc brake group. As the Drum Brake race came to a close, they climbed from their drum brake cars and climbed into their disc brake racers. This was a 'Ferrari' only event featuring a wide variety of vehicles ranging from 250 GTO's to the very dominant 512 BB/LMs.

Three 512 BB/LM's sat in the first three positions on the starting grid. Todd Morici earned the poll position, followed by Jim Fuchs and Chuck Wegner. Through 20 minutes of racing, these drivers fought through heavy traffic and a sun soaked track to improve their positions or to fend off competition. As the checkered flag dropped, the top three would finish in the same position they had started, with Morici in front, followed by Fuchs. Fourth place went to Peter LeSaffre in his Ferrari 275 GTB/C and fifth to the 250 GTO driven by Tom Price.

The final race of the day was the combined groups of the GT and Sport categories. The GT and Sport categories had mostly road-going modern Ferrari's and the faster Challenge Series cars. Three F333's sporadically made appearances on the course throughout the four days, one even saw a little time on the grass, as its driver lost control and ran it sideways into the tire wall. As it returned to the paddock under its own power at the end of the race, it appeared only minor aesthetic damage had occurred. With so many corners throughout the course, Moroso can be very challenging.

Conclusion
During the 2007 season, it was Peter Giddings in the Drum Brake group and Todd Morici in the Disc Brake Group who were commonly the overall winners. If this first race is an indication of the rest of the season, 2008 will be similar to 2007. Five more races will tell the full story.

There is fun both on and off the track at Moroso. Two Maserati MC12 vehicles circled the track from time-to-time throughout the weekend; one was painted in a very stunning black livery. A pair of F40's and an F50 raced during the GT and Sports Group category, both were very impressive as they proved their stamina and speed lap after lap. An eye-catching McLaren F1 rested under a canopy in the paddock area for most of the weekend attracting lots of attention, as would be expected.

After the races, many of the cars were carefully polished, cleaned and prepared for the Cavallino Classic Concorso held the following day at the Breakers Hotel. It is always amazing to witness the level of admiration a vehicle can achieve for both its racing abilities and its beauty. As the cars sat on the well manicured show field lawn at the Cavallino Classic, it became difficult to imagine these priceless works of art as more than just a pretty face. Looks were deceiving, as they cars had just been put through their paces at speed, gracefully negotiating the corners, and tearing up the straight stretches at Moroso.
Galleries
Drum Brake Vehicles
Disc Brake Vehicles