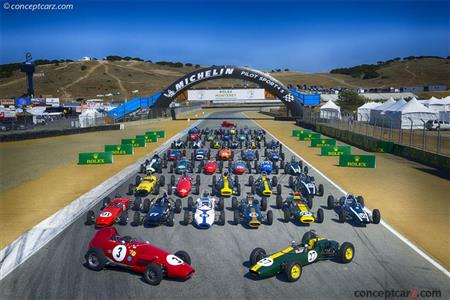 August 2017
The 2017 edition of the Rolex Monterey Motorsports Reunion was held from August 17-20. The 11-turn Mazda Raceway Laguna Seca in Salinas, California is 2.238 miles with 180 feet of elevation change. Over 500 vintage race cars, divided into 15 groups, took to the track at the annual event. The track celebrated its 60th anniversary this year, the 70th Anniversary of Ferrari, and the Diamond Jubilee of Formula Junior. 64 Formula Junior entries were divided into two groups - one for drum and the other for disc brake cars.

The first race held at Laguna Seca was on November 9th, 1957. Prior to this, races were held through on the 17 Mile Drive through the Del Monte Forest in Pebble Beach. It was a treacherous and unsafe course that ultimately ended in tragedy, when driver Ernie McAfee crashed a Ferrari into a tree and died instantly. Racing moved to Laguna Seca where amateur racers competed under the Sports Car Club of America banner.

In celebrating their 60 years, the Monterey Historics displayed 12 race cars that scored significant victories at Laguna Seca including the Ferrari 500 Testa Rossa that Pete Lovely drove to victory at the track's inaugural event in November of 1957. The display, dubbed 'Racing Through the Decades', also featured the track's last major sports car win, the McLaren 650S. On the final day of racing, a special award called the Spirit of Monterey was given to a participant who excelled in the spirit of the weekend. This year, that honor was given to a driver that had participated in the first event at the track in 1957. That individual was Dr. Lee Talbot, Ph. D who competed this year in his 1967 Ginetta G4 sports car at the age of 87.

Formula Junior was created in the late 1950s as an open wheel, entry-level and affordable racing series that would help groom younger racers for top level racing. The cars were small, single seater machines with power and mechanical components sourced from production cars. The early examples were predominantly built in England and Italy with power coming from Ford and Fiat engines. The sport was immediately popular and the number of manufacturers increased. By the close of 1960, there were over 100 manufacturers worldwide, and three years later that figure rose to nearly 500. The development of the cars rapidly evolved and so did expenses.

The vast field of FJ racers at Monterey displayed the mechanical ingenuitya and creative designs of the short-lived series. The list of cars included Stanguellinis, Huffakers, Lotus, Lola, Elva, and Coopers.

The car in Group 1A were even older than the track, with many tracing their roots to the infancy of the automobile. Although a few struggled to traverse the hills of Laguna Seca, they offered spectators a glimpse into what it was like to drive without mirrors, power steering, and to rely on cable operated brakes. Alternatively, the cars in Group 7 (IMSA, GTU, GTO, TransAm) were some of the more modern vehicles traversing the track, with most of the cars from the mid-1980s. Many resembled the production cars of the era, but with highly tuned engines and mechanical components to cope with the demands, speed, and endurance of their respective racing groups. Some of the fastest times came from the Group 8A (IMSA GTP) cars that included the Porsche 962, Mazda 757, a Group 44 Jaguar, and the rotary engined Toyota-Eagles.

Along with nearly non-stop racing action, the event featured several fan activities and special attractions. 'Mr. Le Mans' Tom Kristensen made spirited exhibitions in an Audi R8 LMP1 and shared stories on the Paddock Showcase stage during the Picnic in the Paddock on Saturday. Two-time Formula One World Champion Mika Häkkinen drove the same McLaren M23B that Emerson Fittipaldi had wheeled to the 1974 World Championship and engaged in a Q&A in the Paddock Showcase.

For those making plans for next year's Rolex Monterey Motorsports Reunion, remember that the event takes place on August 23-26, 2018. The Rolex Monterey Motorsports Reunion, along with all other major Monterey Classic Car Week activities, has been moved one week later from their traditional spots on the calendar to accommodate the U.S. Amateur Golf Championship at Pebble Beach Golf Links August 13-19.
Galleries
1A : Sports Racing and Touring Cars Pre-1940