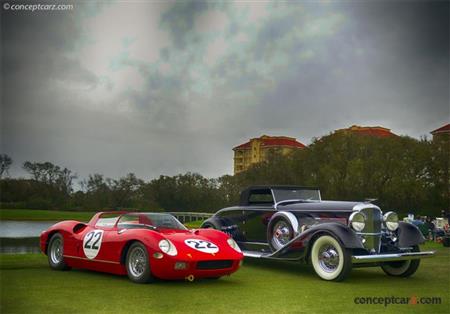 March 2018
This year was the 23rd edition of the Amelia Island Concours d'Elegance, an event that began in 1996. The event is held in and around the Ritz-Carlton on Amelia Island, Florida, and traditionally features a famous racing driver as its honoree, beginning with Sir Stirling Moss. This year it was the Brazilian racing legend, Emerson Fittipaldi, who is a two time Indy 500 winner and winner of two world championships in Formula 1. In celebration, several of the cars that he piloted during his career were on display, including the two Indy 500-winning cars, and his McLaren and Lotus Formula 1 championship cars.

Just like the more recent years, the concours had an uninvited quest which wreaked havoc with the plans. Mother Nature threatened rain for Sunday, prompting organizers to re-schedule the event for Saturday. Nevertheless, the organizers once again proved their world class event status.

Over 300 historically significant vehicles were on display, carefully arranged into 35 categories. This year's special categories including Hunting cars, Grand Touring Prototype, pre-War MG, Electric Horseless Carriages, Jaguar E-Type, Auburn automobiles, N.A.R.T., and Martini Racing. The Amelia Concours celebrated another facet of revolutionary thinking that swept through custom car culture and design in the 1950s, with the Cars of Ed 'Big Daddy' Roth. Roth's customs were counter culture icons in the fifties and sixties and Amelia assembled an all-star team of his wildest creations, creating a rolling memorial to a man who was part of an American cultural movement with aftershocks that still echo. 'Ed Roth's work went well beyond hot rods,' said Bill Warner, founder and Chairman of the Amelia Island Concours d'Elegance. 'His use of fiberglass and his innate marketing genius helped propel the custom car movement to center stage in American culture. Subtlety wasn't part of anything Ed Roth touched, created or thought.'

Though decades separated Big Daddy Roth and E.L. Cord, their approach to automotive design struck a similar vein. E.L. Cord stated, 'there will always be a market for the product that is distinctive . . . that appeals to the man who wants something that isn't exactly like the products owned by all this neighbors.' Along with Auburn's fabled boattail speedster, the 2018 show field housed a significant collection of rare Auburn classics including Auburn Cabin Speedster (replica) and the Auburn Salon Collection owned by Mr. Parfet of Hickory Corners.

Enzo Ferrari is famously quoted as saying that he thought the Jaguar E-type was the most beautiful car ever made. Nearly a dozen examples from the 1960s and 1970s were at Amelia including a lightweight example sold new to the Briggs Cunningham race team. It raced at LeMans and is one of the most significant original E-Type Lightweights.

There were two classes for Ferrari vehicles, including the Ferrari Daytona and Ferrari production. There was also a special North American Racing Team (NART) class which including 10 Ferraris and a one-of-a-kind 1968 Corvette L88. It was from this class that the Concours Judges would select their Best of Show 'Concours de Sport.' That honor was bestowed upon the Ferrari 250/275P owned by the JSL Motorsports Collection. Along with its undeniable visual appeal, the car won the overall at the 1963 ADAC Nurburgring 1,000Kms with John Surtees and Willy Mairesse and the 1964 Sebring 12 Hours with Mike Parkes and Umberto Maglioli driving. It finished second at the 1963 Sebring event and won the first race at Mont Tremblant as a NART entry with Pedro Rodriguez driving. The car was campaigned as a NART entry in 1964 and 1965.

Another incredible race car class included the IMSA GTP Prototypes (Grand Touring Prototype) of 1981 to 1993. These revolutionary racers made IMSA's endurance races of the 1980s and nineties one of the most popular and best supported racing series in North American motorsport history. Complementing the 13 cars on display was the 'Drivers of the IMSA Prototype' seminar hosted by Bob Varsha. It included noted IMSA GT Championship drivers like Hurley Haywood, David Hobbs, Davy Jones, Tommy Kendall, Brian Redman and Chip Robinson.

Sitting alongside the GTP Prototypes on the show field were the Martini Racing cars. Eleven cars were in this group including seven examples from the John and Suzanne Campion collection. The cars wearing the red and double-blue stripes of the Martini International Racing Team has earned many iconic victories including the 24 Hours of LeMans, Monte Carlo rally, World Rally Championship, and the World Sports Car and Endurance Championship.

When new, the Duesenberg Model J was advertised as 'The World's Finest Motor Car,' which certainly held true for this year's Amelia Concours. The Concours Judges selected the Duesenberg owned by Harry Yeaggy as their Best of Show 'Concours d'Elegance.' The car has Murphy roadster-style coachwork that was restyled in period by Bohman & Schwartz of Pasadena, California. Styling changes included a lengthened hood, slotted fenders and more modern bumpers. One of the early owners of the car was Edward Beale McLean, who owned the Hope Diamond and whose family owned The Washington Post.

Since the shows inception in 1996, the Amelia Island Concours has donated over $3.2 million to Community Hospice of Northeast Florida, Inc. and other charities on Florida's First Coast. 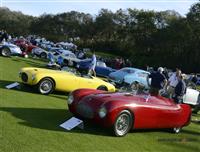