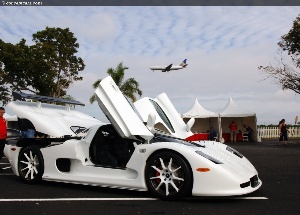 January 2008
A few years ago during the Cavallino Classic Weekend, there was an event called the Palm Beach International Concours d'Elegance. Part of the allure of the event was an auction run by Gooding & Company. The concours and auction were around for only a couple of years. This is really unfortunate due to their ability to attract some well-known collectors and showcase many magnificent automobiles. Since that time, there have been a few events that have come into existence to help fill the gap. One of more recent is the 'Classic Sports Sunday' run by the Cavallino Events, Inc. The name 'Classic Sports' is very suitable and easily explains the theme of the event. Since it was hosted by the staff that organizes the Palm Beach Cavallino Classic, it was almost certain that the attendees, vendors and collectors were assured a quality event.

The location for the inaugural Classic Sports Sunday was convenient and accommodating; it was at the Hilton Hotel at Palm Beach International Airport. Though the cars were enough to keep ones attention, the planes flying overhead and the occasional threat of rain had many looking skyward. During the early morning hours, rain made good on its threat, but stayed only momentarily, enough to have exhibitors sprinting to their car to roll-up windows and reposition their convertible tops.

Approximately 150 show cars were on display; the large parking lot was more than accommodating to these numbers. Various 'fun' awards were presented with categories including 'Newest', 'By Age', 'By Mileage', 'Prettiest Body Style', 'Boring Body Style', 'Peoples Choice', 'Best of Show Racing' and 'Best of Show GT.' Most of these categories are subjective but worked well for this type of event as many of the cars on display had little in common with each other. Various qualities differentiated the vehicles in the same categories, such as decades, body styles, and pedigree. There were a few similar vehicles; the Corvette Club had nearly 15 examples from multiple years aligned side-by-side. Four vipers, all in different colors, attracted a strong crowd throughout the day. Various Porsches, Mercedes-Benzes, and BMWs sat in close proximity to each other. Two Radical racers, a Chevron B17, a Lola T70, and a Huffaker Ferrari 308 had similarities in their exotic racing bodystyles and construction. A pair of Lotus Esprites, a Jaguar XJ220, Lamborghini Diablo SV, a Mosler MT900S, Dodge Vipers, and a slew of Ferraris were some of the more attractive supercars on display. The Mosler MT900S was easily the highlight of the show. Its owner had just taken possession of the car and racked up only a few miles. The car was so new, the owner had not yet had time to figure out how to operate the radio. Granted, the radio was as technically advanced as the car, so a little experimentation is naturally understood.

The craftsmen from The Creative Workshop brought two of their restoration creations, a Speciale and a Connaught L3/SR. Both were immaculately prepared and excellent examples of their talents. The Connaught is one of only three L3/SR's constructed and the only one imported into the United States. Its first race was in 1951 at Watkins Glen, where it won its class. Both are gorgeous machines with designs formed during the golden age of racing.

This event was held on the same day as the Mar-a-Lago luncheon. Mar-a-Lago is held at the famous Marjorie Merriweather Post mansion. The event is a casual Ferrari gathering with proceeds going to charity. The winners from the Cavallino Classic Concorso are on display giving onlookers a second opportunity to revel in their beauty.

The inaugural event attracted many stunning machines and filled the void left by the Palm Beach International Concours. A few of the cars shown at the Palm Beach Concours also displayed at the Classic Sports Sunday. Based on the quality and quantity of cars in attendance, this could be hailed as the beginning of a very successful event.
Galleries
1951-1968