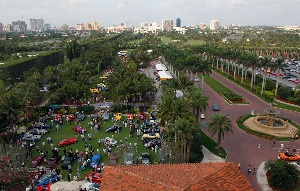 February 2008
The Cavallino Classic is a Ferrari-only event held on the lawn at the Breakers Hotel in West Palm Beach, Florida. Due to landscape that has flourished in the past few years, the event is segregated into two distinct sections, an 'upper' concours and a 'lower' concours. The upper concours, closer to the Breakers Hotel, houses around 30 of the earlier works of the Ferrari marque and the stars of the show. Around one-third had been raced at Moroso Raceway during the Historic Races the days prior to the concours, and with only a day's turn-around, were cleaned-up to concours quality. The Lower Concours began with the 275 GTBs and 330s, followed by the 365 Daytonas, and the Dino Ferraris. As the lawn opened up the farther one traversed, the lineage of the Prancing Horse continued into the modern era, including the 308, 348, 355, 512, Testarossa and ending with such models as the 360 and 430.

This year, the Cavallino Classic 17 celebrated the 50th anniversary of the 250 GT California and the 250 GT Tour de France (TdF) models. On the 'Lower Concours' area the 'Daytona', officially called the 365 GTB, was celebrated and had been produced from 1968 through 1971. The name 'Daytona' was used to commemorate Ferrari's triple success in the 1967 '24 Hours of Daytona.'

Two years ago at the Cavallino Classic 15, the event celebrated the Best of Show winners of the past 15 years. The following year, Cavallino 16, was a celebration of the 166, 250 TR, and the F40. The 166 Models dates back to the early inception of the Ferrari marque while the 250 TR with bodies by Scaglietti are among the more exotic and breathtaking Ferraris ever created during the 1950s. Coming off these two exciting and stellar years, how can these ever be topped? Really!! How can any event compete with the past 15 years worth of 'Best of Shows?' It seems that within each Ferrari (at least the ones with a few decades under their belt), there are interesting tales that accompany them.

At least three of the vehicles on the upper concours lawn had recent stories that could only reinforce their appeal. The Ferrari 412, the 500 TRC, and the Ferrari 250 GT California Spyder were recent purchases bought through RM Auctions. The 1959 Ferrari 250GT California LWB Spyder was another recent purchase, bought at the 2007 Gooding & Company Auction for around $4.5 million. The 412 was sold two years ago with a sticker price that had been estimated as high as 7 million, but sold for a still-rather-impressive 5.1 million before the buyer's premium. During the Historic racing session at Moroso Raceway, the owner put the car through its paces, drafting the competition, accelerating through the corners, heavy braking, and fast acceleration. It did all the typical racing maneuvers which is unheard-of for a 5 million dollar masterpiece. Yet at its core it is still a Ferrari and meant to be driven, raced, and admired. The Ferrari 500 TRC was another multi-million dollar purchase that also saw a lot of track time over the Cavallino Classic celebration. The 250GT California LWB Spyder sold for $4.95 million including buyer's premium.

Situated in the center were four 250 GT TdF models which were essentially Grand Prix cars clothed in two-passenger coachwork. In 1955, tragedy struck LeMans killing 80 people. In response, new regulations were formed to make the events safer, resulting in the classic type of sports race car. These were cars that could be driven around town yet had the stamina and speed to be competitive on the race track.

Fitted with mechanical components from the 250 GT, and given designs by Pininfarina and coachwork by Scaglietti, Ferrari had a race-worthy contender. The Colombo-designed SOHC V12 was more than capable to carry the lightweight aluminum coachwork. They were raced in the Targa Florio, Tour de France, Nassau, Mille Miglia, 1000km Nuerburgring, and numerous other events, often emerging victoriously. Around 100 examples of these endurance sports racing cars were constructed with horsepower starting at 240 and rising to 260 by the end. These nimble sports cars dominated the three-liter GT Class and provided the Ferrari marque with many podium finishes.

In other words, the upper concours lawn was an array of 'priceless' and unique automobiles with many having a legacy that includes racing in LeMans, the Tour de France, and many other grueling and impressive races. The lawn was full of some of Enzo Ferrari's more successful vehicles up to that point in history, both in sales and on the racing circuit.

What seems to be an evolving trend on the upper concours lawn, most of the cars were not in the 'Ferrari Red' color scheme. Silver and blue seemed to be very popular, followed closely by black and dark red. For the lower concours area, Ferrari red and yellow were easily the favorite. In the early days of racing, each car was assigned a color based on the country of origin, with red assigned to Italian cars. The yellow found on the Prancing Horse emblem symbolized the town of Modena, thus the popularity for these two colors.

Conclusion
The Cavallino Classic is one of the largest and most prestigious Ferrari-only Concours d'Elegance events in the country. The large assembly of Ferraris are organized appropriately on the show field and anxious owners wait nearby their vehicles as the judges make their rounds.

The Cavallino Classic is never a gamble for spectator or entrant; it is a quality event that features the 'Crem de la Crème.' This event, coupled with the Shell Historic Races at Moroso Raceway and the newly created Classic Sports Sunday, makes the Palm Beach area a Mecca for the automotive and Ferrari enthusiast in January. It is an opportunity to revel in the beauty and admire the significance of the Ferrari marque.
Galleries
Upper Concours 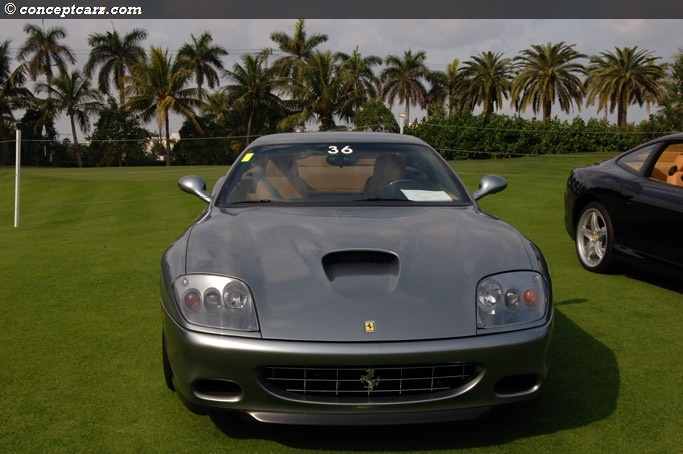