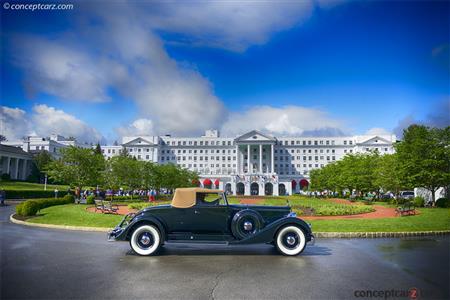 May 2018
The inaugural Greenbrier Concours d'Elegance was held at the historic and luxurious Greenbrier resort. The Greenbrier has hosted automotive events for manufacturers throughout its storied history, with this being the first opportunity for the collector car community to have the same special experience.

After thousands of hours of planning and effort, everything was scrapped in the 11th hour as Mother Nature relentless pelted the area with rain, making the golf course show field impassible. Backup plans were implemented, and the show was moved to two alternate locations. The first of these locations was the picturesque front circle of The Greenbrier's Main Entrance. The other location was the Exhibit Hall (known as the bunker) inside the Greenbrier. After the initial chaos and scramble of this monumental move, many spectators remarked that the new locations turned out to be a blessing in disguise due to the proximity to the Greenbrier and its amazing scenery.

The on-and-off rain throughout the day coaxed spectators into exploring the charm of The Greenbrier. It is big, historic, and beautiful with a plethora of amenities and activities including a casino, shops, bowling lanes and arcade, and restaurants.
Galleries