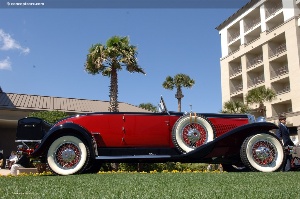 The auction preview, (held on the day prior to the auction), and the auction day itself, had very unusual weather. High winds made the large tents feel like kites - expanding and contracting - under the enormous pressure. Additional reinforcements were made where necessary to keep the tents safe and secure, not to mention the numerous rolling treasures of which they stored. The threats of hurricanes did not seem to slow interest, as nearly every seat and standing area was filled during the auction. Over 91% of the vehicles that crossed the auction block were sold.

More than $16.8 million in automobile and memorabilia was auctioned. Highlights included a rare 1931 Duesenberg Murphy Convertible, which sold for $2.64 million, and an historic 1934 Ford Model 40 Special Speedster, custom built for Edsel Ford, which sold for $1.76 million. A gorgeous 8-Liter Bentley Open Tourer with coachwork by Harrison sold for $2.2 million and a LeBaron bodied Duesenberg went for $1.21 million.

Analysis
Over 90% of the vehicles were sold with the average sale of the day being nearly $168,000. 60% of the vehicles were offered without reserve which is considerably more in comparison to last year's results at the same auction. Last year saw $2 million more in sales with the average sale being $214,800. Even though this year had more cars offered with reserves, it had a higher sales ratio than last year. Over 25% of the vehicles that sold were above the estimated value, which was higher than last year's 17%. Since many are wondering if the collector car market is slowing, this could be a good indicator that the industry is still strong and prospering. It may also be an indication that during these questionable economic times, sellers are a little more cautious with their investments and do what is necessary to guarantee the market value is met. Buyers, while cautious of the fluttering economy, realize that the cars up for sale may be a once-in-a-lifetime opportunity to make the purchase. In short, most of the cars were sold and most fetched the market value.

Highlights
Two Duesenberg Model J's brought in a combined $3.85 million, which was about 20% of the day's total sale. The top four sellers accounted for nearly 50%. The Murphy bodied Duesenberg is a multi-Best of Show winner (including the 2006 MeadowBrook Concours). It retains all of its original components and sits on a short wheelbase with a 'disappearing top' bodystyle. On auction day it shattered the estimated value which predicted a high of $2.0 million by selling for $2.64 million.

The LeBaron-bodied Duesenberg spent much of its early life in Canada, one of the few Duesenbergs ever to reside in that country. It sold for on the high-end of its expected value, at $1.21 million.

Only 100 8-Liter Bentleys were ever produced. 16 were fitted with open bodywork. Six were drophead coupes and ten were open tourers. The Open Tourer Bentley at auction was one of the few still remaining in existence. It made an appearance at the 1989 Pebble Beach Concours, has lived on several continents, and been well used throughout its lifetime. The 8-Liter Bentleys were among the best cars in the world when first introduced. They were able to outpace the competition in speed and acceleration, while offering all the luxurious amenities and pleasantries expected from a car of this caliber. Even today, the stature and rapport are still impressive. At auction, the 8-Liter Bentley sold for $2.2 million.

Arguably the most beautiful and well crafted car up for sale was the Ford Model 40 Speedster Special. It was designed by Edsel Ford and Eugene T. 'Bob' Gregorie, and fitted to a modified Ford chassis. It has European inspired styling with a custom boat tail speedster design and a shape that was perfected in a wind tunnel. The body is made from aluminum, is topless, and has cut-down doors. The canted louvers are in the precise angle of the grille and the rakish windscreen. It is very smooth, clean and stylish with no hood ornamentation, no running boards, and no brightwork. It was used by Edsel Ford until his untimely death, at which point it was sold. During the 1960s it was put into storage where it remained for nearly four decades. In late 1999, the car was discovered by the founder of the Amelia Island Concours d'Elegance. Mr. Bill Warner purchased it on the spot. It was brought to this year's auction at Amelia where it was sold for $1.76 million.

It may have not been a highlight in terms of high sales, but the 1959 Ford Galaxie was very unique. On April 29th of 1959, Ford produced their 50 millionth car, a Galaxie. It was a celebrated event highlighted by a re-creation of the first transcontinental race held in 1909. The 50 millionth Ford flew the Company's flag on the run from New York City to Seattle. In 2008, the car was put up for auction where it was sold for higher than the expected value, at $79,750.

Four 'Pierce-Arrows' brought in a combined $288,750 in sales. (This is one of the few times this many Pierce-Arrows have been offered for sale at one time). The 1927 Pierce-Arrow Series 36 Coupe was the high seller at $121,000. Only 1,900 examples of the Series 36 Pierce-Arrow were created over a three year time period making it a very rare car.

Another low production car was the Rolls-Royce Wraith, of which 116 were created. The 1938 Rolls-Royce Wraith Seven-Passenger Limousine with coachwork by John S. Inspkip, sold for $50,600. The W.O. Bentley-designed Lagonda LG6 sold for $247,500. Only 63 examples of the LG6 were built.

Replicas
There were several replicas, tribute cars, re-creation, and conversions that crossed the block. The list includes a Bugatti Type 35, a Lotus 7, a Ferrari Dino GTS, Porsche 911, Shelby GT350 Racer, and even a Cadillac V16. The Cadillac V16 was converted from a Series 75 V8 into a V16 Fleetwood Convertible Sedan. There were two other Cadillac V16s up for sale with the highest of the three selling for $522,000.

During the present season that we live, the cost to own an original car has skyrocketed so re-creations and conversions are understandable.

A number of Bugatti T35 reproductions have been made, from basic kit cars to sophisticated hand-crafted reproductions conforming to exact specifications. The T35 that made its way to Amelia had a high bid of $160,000, which was just short of satisfying the car's reserve so it left unsold. It was built by a small company named Pur Sang located in Villa Lola. The company has received much press lately with their Pur Sang Bugatti Veyron and production limited to just five units. The company's reputation for quality is nearly unmatched and their expertise with the T35 is unparalleled, as the company has been building T35 replicas for nearly 20 years.

The Shelby GT350 was a conversion. It left the factory as a Hertz Rent-A-Racer that was later fitted with a 545 engine, all-steel body, 9-inch Ford rear end, 12-inch discs in the front and 11-inch competition drums in the rear, and purpose built interior with Kirkey aluminum racing seats. It has all the modern safety equipment and a host of other improvements. This car sold for $165,000 falling within the expected range.

Conclusion
With many of the cars sold and a high percentage selling above the estimated value, the Automobiles of Amelia was another very successful event. 'Over the past decade, our Amelia Island auction, in conjunction with the Amelia Island Concours d'Elegance, has carved a reputation as one of the leading automotive events on the collector car calendar,' said Ian Kelleher, Managing Director of RM Auctions.

'With record attendance and strong prices across the board, this year's Amelia Island auction was a fitting celebration for our 10th anniversary sale,' he added.
Galleries