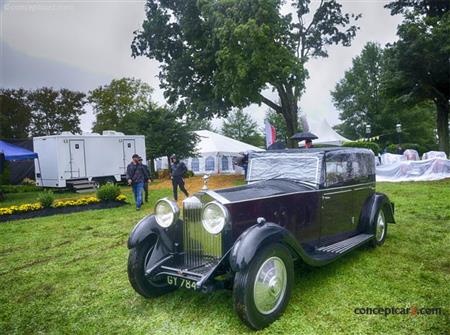 The Radnor Hunt Concours, also known as the 100 Motor Cars of Radnor Hunt, encompasses three days of activities beginning with the Friday evening Barbecue, followed by the always popular Road Rally through the scenic countryside of Chester County on Saturday morning, culminating in a catered lunch. The Saturday evening Black Tie Gala, Silent Auction and Art Show Preview is the prelude to the main event on Sunday, the concours d'Elegance.

Sadly, the big story this year was the weather. Non-stop rain drenched the region several days prior to the concours. It rained during the Cars & Coffee prompting the Show Organizers to preserve the show field for the following day, imposing significant limitations and allowing only a handful of vehicles to be displayed. Rain continued throughout the evening and into concours day. The roads and walkways were turned into mud and streams, and boots became more common than high heels and loafers.

Despite the rain, about forty vehicles were on display. A large number of motorcycles were also on display, but they rested under tarps to avoid the constant downpour. Understandably, attendance was lower than in prior years. This is a rain or shine event, as the concours does not have a rain date since it rents the Radnor Hunt grounds for specific dates.

There were about ten Rolls-Royces motorcars in attendance, the earliest being the 1921 40/45 Silver Ghost owned by Mark and Carolynne Corigliano. It sat near the car that would eventually be crowned Best of Show, the 1932 Rolls Royce 20/25 Saloon by Gurney Nutting owned by Forrest McClain. It was originally sold to 'Bentley Boy' Woolf Barnato, who won the 24 Hours of LeMans three consecutive years in a Bentley. He famously raced the Blue Train from Nice to Calais in France - and won. Barnato commissioned this car from coachbuilder Gurney Nutting in 1932, which features a low roof line and hints of styling similar to the Blue Train Bentley. During World War II, this car was used by the British Military, later in northern Africa, where it saw combat duty and was reputedly blown off the road by a mortar shell.

The Radnor Hunt Concours awarded two Best of Show trophies. The second, the Best of Show Sport, went to the 1956 Chevy Corvette SR2 owned by Irwin Kroiz. Along with its stunning appearance and aggressive stance, is the actual car that was run by many of the best racers of the era, including Dr. Dick Thompson, John Fitch, Bud Gates, Jim Jeffords and of course, Earl's son Jerome. It would capture the SCCA National Championship in 1958 with Jeffords behind the wheel. Unique features include a 331 cubic-inch V8 engine with a prototype dual air meter fuel injection, a prototype 4-speed manual transmission, the 36 gallon fuel tank, a lengthened front end, the special rear high fin, dual low profile windscreens, Halibrand axles and magnesium knock-off wheels.