Bonhams, An Important Sale of Collectors' Motorcars and Automobilia 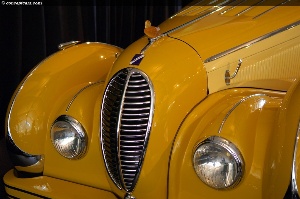 September 2007
Bonhams 1793 (named for its founding date) is a leading auction house that works in diverse categories including art, antiques, photography, coils, musical instruments, and about 70 other classifications. They are one of the worlds oldest and the third largest and fastest-growing auction house in the world. Their US subsidiary, Bonhams & Butterfields, holds over 50 auctions per year with sales rooms in Los Angeles and San Francisco.

Each year for the last decade automotive connoisseurs from around the globe have traveled to the annual Bonhams & Butterfields automotive auction held in Monterey, California during the Monterey Peninsula Car Week, better known as Pebble Beach Week.

Many of the cars that cross the auction block have a well-known racing heritage, a historic pedigree, an unequalled rarity, or an unrivaled ambiance and presence. The 2006 sale at the Quail Lodge Resort & Golf Club, An Important Sale of Collectors' Motorcars and Automobilia, featured a plethora of vehicle's with celebrity ties. The 1916 Oldsmobile Model 44 Roadster was formerly in the care of Bill Harrah, the casino impresario and renowned car enthusiast. The Cadillac V16 Imperial Limousine was once owned by President Herbert Hoover. Lena Horne, a famous jazz musician and actress, once owned the very rare Jaguar MKV Drophead Coupe. Less than 400 examples of the Drophead Coupe were ever created. The Pierce-Arrow Model 845 Club Sedan made an appearance in the movie, The Sting, starring Paul Newman and Robert Redford. On auction day it sold for $46,000 and within the estimated value. The Chevy Lumina Winston Cup NASCAR racer from the movie Days of Thunder, starring Tom Cruise and Robert Duvall crossed the block but failed to find an interested bidder willing to satisfy the reserve. Surprisingly, the 1984 Pontiac Firebird, better known as 'KITT' from the Knight Rider TV series, also left the auction unsold. The car was formerly owned by Hollywood car customizer George Barris and is the only Super Pursuit Mode car left in existence. Other shocking 'no sales' included some of the most anticipated cars of the auction, including the Murphy bodied Duesenberg, the BRM P160 racer, a Delahaye 135M, an Allard K2, and a DB4 Aston Martin.

There was a wide range of vehicles with many styles to satisfy a diverse group of bidders. One of the stronger categories was the muscle car and pony car group, which had many examples from these glory days. Corvettes, Mustangs, Road Runner Superbirds, 'Cudas, Camaros, Chevelles, Challengers, and more were definitely not in short supply. Another strong category was racers, including LeMans entrants, Formula 1, Formula 2, Indy Car, and Formula Junior, to name a few. There was a pair of Cooper Monaco's with both selling below their estimated value, with each sale nearly equaling the other, averaging $243,000 each (plus premium and taxes).

The high sale of the day went to the Rolls-Royce Phantom I with an extensive concours history, selling for $360,000 plus premium and taxes. Second in sales went to the Cadillac Model A which netted $300,000 (plus premium and taxes). This is a very important car as it is chassis number 13 and is the oldest known surviving Oldsmobile. A gorgeous Talbot-Lago T120 'Baby 3-Liter' sold for $260,000. It has coachwork by Talbot used under the Figoni patent.

Conclusion
There was a very diverse line of vehicles and an equally impressive assortment of memorabilia to cross the block on auction day. Held in conjunction with the Quail, A Motorsports Gathering, this was certainly one of the highlights of the hectic Monterey Week.
Galleries
1886-1930 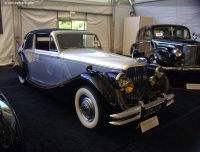