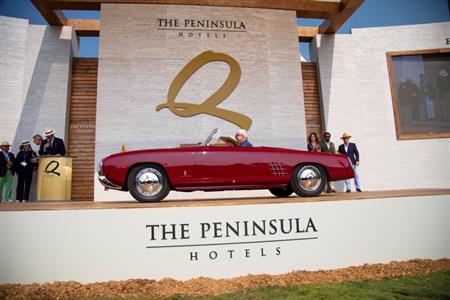 August 2018
'The Quail, A Motorsports Gathering' is a very grand private garden party that combines automobiles with exquisite international cuisine and award-winning wine vendors. Held in Carmel, California with the Santa Lucia mountain range providing a stunning backdrop, over 250 vehicles graced the well-manicured lawn of the Quail Lodge & Golf Club and greeted more than 5,000 spectators, including motorsports dignitaries, celebrities and dedicated enthusiasts. Among the vehicles on display were the latest automobiles from select manufacturers, some of which used 'The Quail' as the stage for world debuts.

Celebrations
Four special classes were recognized this year, including the '50th Anniversary of the Lamborghini Espada & Islero,' which paid tribute to two of Lamborghini's most timeless V12-powered touring cars. 'The Great Lancias' class exemplified the manufacturer's strong rally heritage through a selection of noteworthy models. The list of entrants included the Lancia Beta Monte Carlo, the Lancia LC1 and LC2, Lancia 037, and the Delta S4. Lancia returned to sports-car racing in 1979, the first time in 25 years, by fielding turbocharged Beta Monte Carlo coupes in the Group 5 'Silouette' category. These cars, flamboyantly striped in bright colors, won the 1980 and 1981 world titles in the under-two-liter class. The LC1 was a strong competitor in Group 6 and only four examples were produced. The LC2 was Lancia's answer to the Porsche 956 and 10 examples were built. The 037 were Rally Cars designed to compete in the Group B World Rally Championship. The Delta S4, introduced in 1958, was used to defend the company's reputation as the world's leading marque for rallying. The four-wheel drive car raced in Group B as a specially adapted version of the limited-edition Delta S4 production car. In its first competition test the S4 won the Royal Automobile Club International rally in 1985.

The '70 Years of the Iconic Porsche 356' class celebrated the German automotive history and legacy of the marque's first production sports car. Many notable examples were on display offering visitors a unique experience to study and enjoy the evolution that transpired during its nearly two decade production lifespan. Additionally, 'The Alois Ruf Reunion' showcased a selection of bespoke sports cars, including the brand-new RUF CTR, from the legendary Pfaffenhausen manufacturer and tuner. Nearly a dozen Ruf tuned cars were on display, including the legendary 'Yellowbird' which helped establish the company's reputation as an automotive high performance tuner.

Awards
The Spirit of The Quail award was bestowed upon the 1979 Volkswagen Tamiya Sand Scorcher owned by Dean Lanzante of the United Kingdom. The Octane Choice award went to the 1958 Ferrari 250 Testarossa owned by the Hon. Sir Michael Kadoorie of Hong Kong SAR. It is one of the most famous of all Testa Rossas, finishing first overall at the 1958 LeMans driven by Phil Hill and Olivier Gendebien, and third overall at the 1958 Targa Florio driven by Mike Hawthorn and Wolfgang von Trips. It is an original LHD Ferrari team car with outside door hinges and a fresh air vent on the cowl similar to 0666TR. After the 1958 Targa Florio race, it was converted at the Ferrari factory from the original pontoon fenders to the envelope body.

The FIVA award went to the 1970 Datsun 240Z owned by Eric Breslow of Nevada. Datsun introduced their 240Z to the press in October of 1969 and made its public appearance a few days later at the Tokyo Motor Show. This was the first Japanese-made sports car to achieve worldwide recognition. The 240Z was designed at Nissan by a team headed by Yoshiko Matsuo, with input from consultant Count Albrecht Goertz, stylist of the BMW 503 and 507. The 1970 and 1971 models, considered Series 1, are to this day among the most popular sports cars ever produced. Based on the Fairlady Z, the 240Z is powered by a 2393cc six cylinder engine that produces 153 horsepower, providing plenty of power and impressive performance.

The coveted Best of Show was awarded to the 1953 Lancia Aurelia PF200C owned by Anne Brockinton Lee of Nevada. Pinin Farina created around six PF200 Aurelias show cars, four of which are believed to still exist today. And, no two were exactly the same. The example on display at The Quail was the show car in the 1953 motor shows of Geneva, Paris, Frankfurt, Torino and still bears the dash plaque from its award-winning display at Stresa, Italy. Only the prototype PF200 was given the circular nose while future versions wore more elliptic noses, while some had standard tailpipes, and others featured the bumper-through exhausts of the original Turin car. One of the three open cars had a removable top and side curtains while the others had wind-up windows and a more permanent soft-top.

The PF200's styling prompted at least two more similarly styled cars built on American chassis. Norman Granz was inspired by the prototype PF200 Roadster at Turin and ordered similar bodywork on a Cadillac 62 chassis. In 1956, Pinin Farina took the design a step further with the Palm Beach Special, which was built on a Nash Rambler chassis.