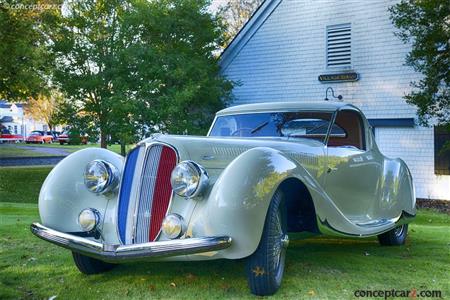 November 2018
The third annual Trump National Concours d'Elegance was held near the shores of Lake Norman on the nationally ranked and world-renowned Trump National Golf Club-Charlotte. The location has been named one of the most spectacular and exciting courses in all of North Carolina. Along with a vast display of concours cars, the event showcased noteworthy cars and car clubs from the community.

This year's Collector of the year was Robert S. Jepson, Jr. A talented and accomplished individual, Mr. Jepson's cars have been awarded Best of Show at six major American Concours. He brought three cars from his collection including a 1919 Pierce Arrow Model 66 A-4 Tourer originally owned by Roscoe C. 'Fatty' Arbuckle, an Isotta Fraschini Model 8-AS Dual Cowl Phaeton with coachwork by LeBaron, and a Delahaye 135 MS Coupe by Figoni.

The weather was perfect; the days leading up to the event, however, were not as cooperating. The rain soaked show field forced organizers to scrap their well-laid plans and implement the backups. The spacious and scenic grounds of the Trump National Golf Club provided several suitable locations, and the issue was quickly resolved.

The Best of Show honor was bestowed upon the Isotta Fraschini 8ASS owned by Peter Boyle. The chassis was built in Italy and then delivered to the LeBaron Company in the United States to have the boattail body with single rumble seat installed. It was displayed at the 1928 New York Auto Show and later purchased by 'America's Darling of Broadway and The Silent Screen,' Marguerite Clark. Ms. Clark was the inspiration for the Walt Disney character of 'Snow White.'

The Outstanding Pre-War award went to the 1928 Auburn 8-115 Boattail Speedster owned by Al and Barbra Mason. The Speedster's iconic design is attributed to Count Alexis de Sakhnoffsky, a pioneer of streamlining and to Alan Leamy, the Cord L-29 designer. It wears coachwork by McFarlan and is powered by a Lycoming straight-8 engine offering 115 horsepower. There are dual side mounted spare tires, dual golf bag doors, removable fabric top, pilot ray lights, and small fender lights. It is identical to the Speedster that Wade Morton drove on February 20, 1928 at Daytona Beach, Florida setting a production car record of 104.347 mph.

The Auburn Speedster was stored at an estate in New Jersey from 1945 and still had the fuel ration sticker on the window. An eleven year restoration began in 2004.

The Outstanding Post-War award went to the Cadillac Elegante of Dick Birdsall. It is a one-off special with a body built by Carrozzeria Rocco Motto of Turin Italy and took more than 2 years to complete. As the name implies, this vehicle is elegant. The car features 23 karat gold, a mother of pearl white exterior, red wine Italian leather interior, dual headlights, tailfins, and two-piece folding convertible hardtop. The car was completely hand-built out of aluminum. The result inspired one young lady to publicly exclaim: 'Why it's so beautiful it's indecent!'

The Outstanding Sports Car award went to the 1955 Alfa Romeo 1900 CSS owned by Kim and Stephen Bruno - who graciously brought additional vehicles including a 1956 Ferrari 250GT, a 1955 Ferrari Europa GT, and a 1953 Fiat 1100D. The Bruno's Alfa wears cabriolet coachwork by Ghia-Aigle of Switzerland and displayed at the 1955 Geneva Auto Salon.