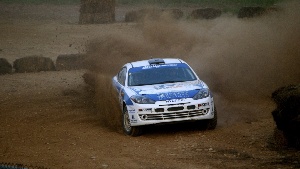 June 2008
Rally car racing is extreme, unpredictable, and possibly the most grueling event where rubber meets road. It is an all-season event that traverses a vast terrain, from gravel to snow and everything in-between. The modified road cars cover more than 100 miles in each race and often are divided by mere seconds from the next competitor. This year's Waste Management Susquehannock Trail Performance Rally, presented by Citizens & Northern Bank and sanctioned by Rally America, ran in early June on very hot days (temperatures exceeded 110 degrees inside the cars), in Wellsboro PA. Most drivers consider a finish without major damage a notable accomplishment. Notable announcements were made including Waste Management as a new sponsor, as well as a two-day format that includes competition on Friday and Saturday.

2008 marked the 32nd running of the STPR and much has changed even since last year's event. The big news in 2007 was the cancellation of stages and the shortening of the event from 10 competition stages down to eight. Last year's delays and cancellations were due to spectators. This year, on nearly ever page of race literature distributed at the event, there were spectator guidelines, notices of 'no alcohol', 'safety reminders', and 'how to spectate'. In other words: pleas for proper behavior, so that all stages could be run.

Another cancellation was the event's premier stage, the 'Subaru Splash', also known as the 'creek crossing'. This stage had become the STPR's hallmark and identity. As the reigns were being tightened and it seemed everyone feared the worst, the clouds of creativity opened and the Subaru Super Special Stage at the Tioga County Fairgrounds was born.

One of the major complaints about spectating at an event such as this, is the brief enjoyment of a driver, as they traverse the long course at high speeds. With the introduction of the Fairgrounds stage, spectators are able to watch the drivers in a controlled and diverse environment, which includes sharp turns, jump, and high speed straight stretches. The short course is able to be viewed from the spectating area, allowing fans to study their drivers throughout the entire course. This stage was run on both Friday and Saturday evenings. Though it cannot replace the glorious explosion of the cars entering the water at the 'Subaru Splash', it is a welcomed alternative.

The changes in schedule meant that the stages that were run at night are now done during the day.

On a Roll
Subaru Rally Team USA driver Travis Pastrana, got behind the wheel of a brand-new Impreza WRX STi competition car. Pastrana, the X-Games motorcyclist and two-time defending Rally America Champion, was the crowd favorite. Unfortunately, he was shown new angles of the Subaru early in stage 4, when the car was involved in an accident and rolled-over. Both driver and co-driver were fine, but the accident blocked the road and eventually caused rally officals to stop competition on the stage. Going into stage four, Pastrana had been running in seventh place.

The other 2008 Impreza STi was driven by Pastrana's Team Subaru colleague, Ken Block. Early in the rally on Friday, a weld on the lower control arm in the rear suspension broke on Block's car, which meant both Team Subaru entries ended the rally prematurely. Block returned to the rally on Saturday, although he was officially out of the rally and his times did not count in the standings. Unofficially, he 'won' two stages on Saturday.

Pastrana had also suffered suspension problems on Day 1, but was able to continue, though it had dropped him into ninth place. Teething problems are to be expected on new machinery; it was unfortunate for drivers and spectators that neither were able to finish the race. The 2008 STI is the third generation of the legendary Subaru WRX STI model line. It features a new 5-door hatchback design making it strikingly different visually compared to the outgoing 2007 model. Other major differences include a better front-to-rear weight distribution, onger wheelbase, wider track, lower center of gravity, and the addition of a double wishbone rear suspension. Going forward, the 2008 Subaru WRX STI Open Class rally car is expected to perform even better than the outgoing 2007 model it replaces.

This was the fifth of nine events in Rally America's championship series and prior to the STPR race, Pastrana was in second place. He was a mere one-point behind Canadian Andrew Comrie-Picard, and teammate Block sat in third just three points behind the points leader. With both Team Subaru drivers out of the race, Comrie-Picard had the opportunity to widen the lead. Unfortunately for the point's leader, his Mitsubishi Evolution IX overheated, causing him to retire after Stage 7. The top three standings remained unchanged (plus the addition of one point each for starting the event) at the conclusion of the STPR event. Another point's leader, Kyle Sarasin, retired after Stage 8 due to transmission failure.

Race Results
Drivers were anxious about their finish at STPR, as the top-six point scorers after this round were expected to receive invitations to participate in the X Games. Tanner Foust, Ken Block and Travis Pastrana were medalists in the 2007 X Games, so their invitation was automatically secured.

After the first day of racing, the first three stages were complete. Stage one was a 9.12 mile, freshly graded road. Stage 2 was a reverse of SS1, and Stage 3 was the 'Subaru Super Special' event held at the Tioga Fairgrounds. After three stages, Rockstar Energy driver Aussie Andrew Pinker was in the lead. Last year, he won this event averaging over 85 mph, and was hopeful to score some much needed points and finally overcome mechanical problems that have plagued the car throughout the opening four rounds of the series. The following spots were held by Rockstar Energy's Tanner Foust and Canadian Antoine L'Estage.

Only a few cars made it through the fourth stage, as Pastrana's accident caused nearly an hour delay, and the transiting of cars to the start of stage five.

Saturday's stages provided the perfect platform for high-speed runs where drivers who had been conserving their machines could unleash their true potential. Many position changes occurred throughout the day, since the more cautious drivers were playing it safe. By preserving their vehicles and making sure all stages were completed, they were now driving at full force. Also, many of the top contenders, as well as many throughout the field, had succumbed to mechanical difficulties.

With only five stages remaining, L'Estage was sitting in first place, but how long the lead would last was questionable. L'Estage was having problems with his turbocharger; However, he was able to make it to the second service break of the day. During the hour-long stop, the crew worked to fix the Hyundai Tiburon. The repairs were made, but the team was unsure if the repairs would last. Foust was in second place, 26 seconds behind the leader. In third place was Matt Johnson. William Bacon was in fourth, followed by 'Cowboy' Kenny Bartram. Bartram had double-duties over the weekend, performing for the crowd at the fairground stages on his motorcycle. Pinker sat in sixth place, again feeling the pain of mechanical issues as he lost three minutes during the early Saturday afternoon stages due to a faulty turbo.

L'Estage was able to hold onto the lead for the remainder of the stages, finishing ahead of second place finisher, Foust. Foust was closing in on L'Estage but busted a turbo intercooler hose and lost valuable time on stage eight. They finished just 17 seconds behind the leader after having won five stages. Third place went to Johnson and his Subaru Impreza STi who was one of the few cars to not experience mechanical difficulties throughout the weekend. Fourth place went to Pinker who was a full four-minutes behind the leader. William Bacon driving a Mitsibushi Evo IX finished in fifth; the next seven places went to Subaru Impreza's.

Conclusion
Many big changes: new sponsorship, a new two-day format that includes competition on Friday as well as Saturday, no more night stages, no more 'Subaru Splash', and new spectator-friendly stage at the fair grounds. After 32 years, the STPR continues to excite. It is one of the oldest rally races on the schedule and the fastest rally in North America. Many drivers made it a goal to just finish the race, avoid accidents and mechanical problems, and preserve their equipment for all 13 stages.

'I've been attending the STPR since the 80's and for the past few years have seen the spectating grow out of control. I knew something had to be done and I think the changes this year were a great start,' said race enthusiast Tone. 'The stage at the Fairgrounds provided an opportunity that we have never had. We could see every car race an entire stage right before our eyes.'
Galleries
Gallery
Open Class