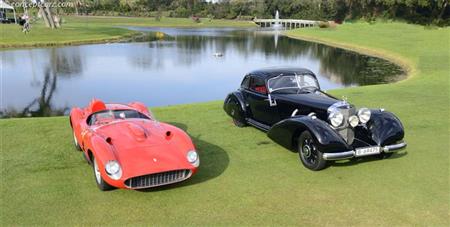 March 2019
During the past two years, the main story surrounding the Amelia Island Concours was the weather and the need to move the event a day back to avoid the downpour. This year, the 24th edition of the annual event, the weather cooperated and the crowds turned out in record numbers.

The mid-engine category displayed memorable household names including the Lamborghini Miura, DeTomaso Mangusta, Ferrari Dino, and the Ferrari 365 GT4/BB. Also included was the Chevy Corvette XP-897GT, marking its first time on U.S. soil in 45 years. Its timing was very relevant considering Chevrolet is soon to unveil its first production mid-engine Corvette. Not only was the experimental XP-897GT a study in mid-engine design (one of two-mid-engined Corvette prototypes designed by GM Styling Division), it was a test bed for the high revving Wankel Rotary engine which was intended to power all GM passenger cars from 1976. In the end, the rotary Wankel engine proved to be both thirsty and polluting compared to the conventional piston-in-cylinder engine so the simultaneous gasoline shortage and strict Federal emission legislation sealed its fate.

Among the Jaguar XK120 class some well curated examples. The list included an alloy-bodied roadster, one of 242 examples produced. The earlier cars were constructed from aluminum; strong demand saw production switch to steel bodies, which could be built much faster and in greater numbers. Another examples on display was previously owned by Actor Clark Gable. There was a highly modified 'Special' with the work being performed decades ago. It was given a Porsche Speedster windscreen, the fenders were cut out to allow more air to the brakes, and a hood scoop was added along with louvers. The 3.4-liter Jaguar engine was modified and fitted with a McCullough supercharger.

Race cars are not traditionally part of a concours d'Elegance, but they are a part of The Amelia. Several race and sports car classes are among the reoccurring classes. Additional sports and racing car classes this year included the Cars of Ickx, Indy Innovation, Porsche 962, and Gainesville History.

This year, The Amelia celebrated the golden anniversary of the Gainesville Raceway (originally named Gainesville Dragway) which opened in 1969. Over the years it has earned the title of being one of America's greatest and fastest drag racing venues. It has held some of drag racing history's most memorable moments, and it has done so a quarter-mile at a time. A year after its opening, it was added to the NHRA's national event calendar - the Gatornationals. Many records have been set at the Gainesville track; attributed to the track being very straight, at sea level, and the surface is astonishingly grippy. The Amelia celebrated the Gainesville history by displaying dragsters, flip cars, and funny cars.

Racing improves the breed and many important lessons are learned through the successes and failures. Since 1911, many of those lessons have been taught at the Indianapolis 500. This year, The Amelia highlighted mechanical and design advancements that including the mid-engine layout, front-wheel drive, diesel power, and aerodynamics. Best in Class went to the 1934 Duesenberg Cummins Diesel, one of two Cummins powered Duesenbergs built by Clessie Cummins and the Cummins Engine Company for the 1934 Indianapolis 500. It served as a test bed in the origins of the battle between the two stroke diesel engines of General Motors/Detroit Diesel and the four stroke diesel engines Cummins would build. At Indianapolis the car was powered by a two stroke version of the Cummins four-cylinder Model H diesel engine as part of a competition within the company to help determine Cummins' future design architecture. Their other entry in 1934 was an identical Duesenberg powered by a four stroke version of the same engine. The car on display at Amelia qualified 29th and finished 12th with an average speed of 88.566 mph.

The Porsche 962 enjoyed an unprecedented two decade dominance of international prototype racing. Introduced in 1984, it was derived from the earlier-type 956 Coupe that was designed for Europe's World Sportscar Championship Group C. From 1984 through 1991, Porsche built 91 examples of the 962 - 75 of them were built as customer cars. Eleven examples were on display at The Amelia, with chassis number 962-002 being selected as Best in Class. It was a factory 'Werks' car and one of the most historically significant Porsche racing cars of all time. It is the second 962 constructed by the factory and competed in the FIA World Endurance Championship for the Rothmans Porsche factory 'Werks' team. Among its accomplishments was a victory at the 24 Hours of LeMans, driven by Hans Stuck, Derek Bell and Al Holbert.

Recently, Hot Rods have been given prominent real estate at concours events, particularly those created in period. The Amelia continued the Hot Rod Customization trend by showcasing the work of Ken Fenical of Hummelstown, PA, better known as 'POSIES' - his family owned a florist business, and he spelled his nickname in CAPS. Seven examples were on display, each displaying unique creativity, skill and craftsmanship. There were four pre-War Ford Hot Rods, a two-door 1955 Ford Station Wagon, and a pre-War Studebaker. Called the Extremeliner, the Studebaker has an Art Deco style appearance apparently influenced by the mid-1930's Cord 810/812 and Lincoln Zephyr. Additional influence came from Andre Dubonnet's 'Xenia' coupe of 1937. Development work began in 1994 and it took five years to complete. Built around the same time, the Ford Station Wagon was purchased in 1997 as a stock 1955 Ford Ranch Wagon. It was soon transformed into a POSIES Statement named Orange Krisp. The name came from the custom paint mixed by PPG at their labs. Major changes to the wagon include a roof skin from a 1958 Edsel Station Wagon, double Ford Crown Vic side moldings, relocated gas filler door and license plate surrounded and extended headlight brows. POSIES SuperSlide Rear Springs and a Mustang II Fatman Front Stub Kit were used to lower the wagon. A Roush 5.0 RSC Supercharged Coyote engine supplies 600 horsepower to the Ford 9' Rear Axle. The engine is cooled by a Custom Walker Radiator while the passengers are cooled by Vintage Air.

Continuing the idea of 'doing the same thing was boring', The Amelia showcased coachbuilt Volkswagens. Unique and coachbuilt cars are often the staples of the Concours d'Elegance. However, in this context, Volkswagen seems the polar opposite. They were utilitarian and economical people movers, built in high numbers, and were designed to accommodate function - rather than fashion. Creative and enterprising individuals took notice, and over the years have transformed the air-cooled VW chassis into custom cars and creations - more than any other vehicle in the world. The list of craftsman include Rometsch, Dannenhauer & Stauss, Frua, and Hebmuller. The Amelia celebrated their work and creativity by displaying a dozen unique and special vehicles. The list included an enlarged Beetle Taxi, a wrought iron bodied Wedding Beetle, and a mid-engine Karmann-Ghia Type 1 Concept by Ghia. Best in Class went to the Rometsch Beeskow Coupe, the 76th car produced in 1954. In 2017, it was discovered disassembled in Sweden. Since then, the car has been recommissioned, preserved unrestored with the original cosmetics, engine, transmission and interior. The headliner and carpets were the only pieces replaced because they were stored on the concrete floor and rendered unusable.

The 1938 Mercedes-Benz 540K Autobahn-Kurier of the Keller Collection was selected as Best of Show. Just one look at the exquisite and voluptuous lines designed by the brilliant visionary coachbuilders at Sindelfingen and it immediately becomes clear why the 540K Autobahn Kurier was BoS. It is elegant and graceful; rich and simple; styling perfection. It is an excellent example of the use of aerodynamics during the 1930s and 1940s. The name 'Autobahn-Kurier' means 'Streamline Limousine'. These body styles were produced in limited numbers with less than ten examples being constructed.
Galleries
Cars of Ickx 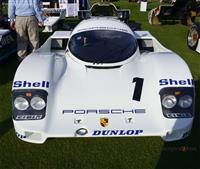