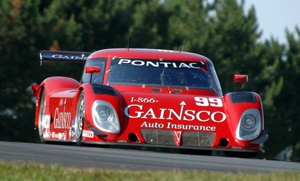 June 2008
While it poured Saturday at the Mid-Ohio Sports Car Course, the No. 99 GAINSCO/Bob Stallings Racing Pontiac Riley of Jon Fogarty and Alex Gurney found a ray of sunshine.

Gurney passed Matt Plumb on the outside with nine laps remaining in the 76-lap (two hours and 45 minutes) and went on to win his first Grand-Am Rolex Sports Car Series presented by Crown Royal Cask No. 16 victory of 2008 in the EMCO Gears Classic presented by KeyBank.

Gurney and Fogarty, the defending Daytona Prototype champions, had not visited the podium since finishing second in the season-opening Rolex 24 At Daytona.

Meanwhile, Eric Lux and Leh Keen drove to victory in GT in the No. 86 Farnbacher Loles Porsche GT3, giving Porsche its first triumph of the season in eight races.

A heavy rain began pouring only seven laps into the two hour, 45-minute event, leading to a multi-car spin that involved numerous contenders in both classes.

'It was all about survival today,' Patrick Dempsey said. He and Joe Foster finished 12th in GT, sharing the No. 40 Hyper Sport Mazda RX-8.

Darren Law finished second in the No. 58 Brumos Racing Porsche Riley that David Donohue put on the pole. He took the position on the final lap of racing, before a two-car incident caused the race to end under caution. Plumb and Gene Sigal finished third in the No. 7 RumBum.com BMW Riley.

A sudden downpour early in the race resulted in a multi-car spin involving several contenders in both classes. The incident began when Tom Kimber-Smith spun the No. 16 Cheever Racing Crown Royal Pontiac Coyote after contact. John Pew spun the No. 6 Michael Shank Racing Ford Riley to avoid Kimber-Smith, but Brad Jaeger slid the No. 77 Doran Racing Ford Dallara into Pew. Meanwhile, several other Daytona Prototypes slid off course and needed tows, including Jim Matthews in the No. 91 Riley Matthews Motorsports Pontiac Riley and JC France in the No. 59 Brumos Porsche Riley.

Moments later, GT pole winner Lawson Aschenbach spun, triggering an incident that involved the No. 32 PR1 Motorsports Pontiac GXP.R of Mike Forest, the No. 67 TRG Porsche GT3 of Tim George Jr., the No. 06 Banner Racing Pontiac GXP.R of Marc Bunting and the No. 87 Farnbacher Loles Racing Porsche GT3 of Bryce Miller. Moments before the caution ended, Jon Fogarty spun and continued in the No. 99, falling from second to 23rd position overall.

But that was the downside. The upside was standing in victory lane.

In all, there were eight caution periods for 35 laps.

Keen took the lead from Robin Liddell in the No. 57 Stevenson Motorsports Pontiac GXP.R late in the race after a back and forth battle. Liddell and Andrew Davis finished second, giving them their fifth podium finish in the last six races. Diego Alessi finished third in the No. 21 Matt Connolly Motorsports Pontiac GTO.R that led much of the early portion of the GT race with Ryan Phinny at the wheel.