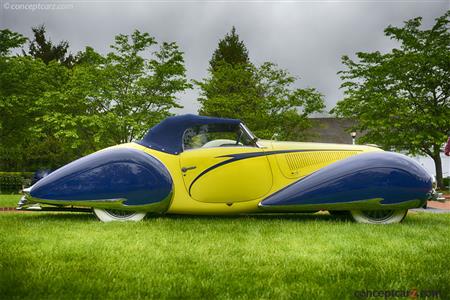 May 2019
The second annual Greenbrier Concours d'Elegance was held at America's Resort, The Greenbrier, which has a long connection with the automotive industry. The Friday leading up to the Sunday Concours included two driving tours - The Summit Drive and the Kate's Mountain Drive, giving car owners the opportunity to enjoy their vehicles on the beautiful mountain roads. Saturday was the International Car Show day on the world-renowned golf courses at The Greenbrier, which brought car clubs and individual owners together to celebrate their love for the automobile. Sunday was the main event, the Concours d'Elegance, with the cars carefully arranged on the Virginia Lawn and the iconic Front Entrance circle of The Greenbrier. The cars were separated into 11 categories, including Brass Era Cars, Classic Cars, Pre-War Production Cars, Post-War Production Cars, Sports Cars, Exotic Sports Cars, British Sports Cars, Preservation Cars, Race Cars, Muscle Cars and this year's featured class, Rolls-Royce/Bentley, which celebrates the 100th anniversary of Bentley Motors.

Bentley selected The Greenbrier Concours to introduce to the United States its newly redesigned 2020 Continental GT Convertible. This was the first chance for the American audience to get a glimpse of the luxury car maker's newest offering. The unveiling of the pinnacle open-top grand tourer was on Friday night at the Welcome Reception. It was then on display, along with the Bentley Bentayga V8 SUV, at the International Car Show where it was available for ride-and-drives. Saturday evening, at the Charitable Dinner which benefits the AACA Library and Research Center and the Mountaineer Autism Project, the Bentley celebration continued with select cars on display. The dedicated class of Rolls-Royce and Bentley cars housed eight unique vehicles including a 1925 Rolls-Royce Silver Ghost, 1934 Bentley 3.5-Litre Sports Saloon, a 1954 Bentley R Type Saloon and a 1961 Rolls-Royce Silver Cloud 2. The judges selected the 3.5-Liter Bentley wearing a Barker sports saloon body as their favorite and Best in Class. The car has had six owners during its existence with the current caretakers acquiring it in 2001, when it was restored to its original colors and fabrics.

Last year, a rare overnight storm dropped five inches of rain and flooded the golf courses, prompting show organizers to trade the soaked grass location for the sturdy concrete of the main entrance. This turned out to be a blessing in disguise, as the setting was picturesque and in close proximity to the historic Greenbrier, allowing show-goers to tour the cars and the grounds. Pleased with the location, the main entrance has become the events home. Rain was again a factor, albeit a much smaller one. At various times throughout the day, a light drizzle saw convertible tops going up, and umbrellas being placed over the open seats of the Indy cars.

The awards ceremony invited Best in Class winners to perform a lap around the circular driveway as enthusiasts watched and listened as the vehicle got a little exercise. The penultimate award was Best of Show, awarded to one of two Figoni et Falashi bodied cars in attendance. Figoni & Falaschi was known for producing some of the most flamboyant, if not elegant coachwork for the French carrossiers. Talbot-Lago was formed following the collapse of Sunbeam-Talbot-Darracq in 1935, with the Darracq name being continued for use on export models. The brightly-colored Best of Show winning Darrocq /Talbot Lago is a one-off example built in the style of the 1936 Paris Auto Salon Delahaye and is the only enclosed-fender Talbot-Lago built. It is one of the most striking designers of the coachbuilding era with its sweeping pontoon fenders, low windscreen and intimate seating for two. It is constructed on a standard T-150-C long-wheelbase chassis and powered by a 4-litre hemi-head in-line 6-cylinder engine mated to a 4-speed Wilson pre-selector gearbox. This car was initially sold by DaRocha, the Talbot-Lago concessionaire in Portugal, to Count and Countess deCollivia of Oporto. It remained in that family until 1975. In the mid-2000s it was given a restoration and has been shown at many top concours events including Pebble Beach and Amelia Island.

Improved weather, a plethora of historically significant automobiles, and a scenic backdrop made the second annual Greenbrier Concours a successful and enjoyable event.
Galleries
Rolls-Royce and Bentley