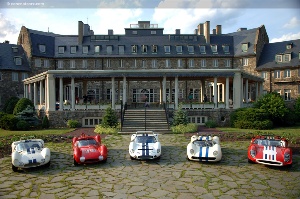 July 2008
The tranquil hills of the Pocono Mountains are a popular destination for visitors around the northeast, including New York City and Philadelphia. The region offers a host of state parks, game lands, natural areas, and a national park. What has become a tradition for over two decades, some of the most beautiful and awe-inspiring Italian cars ever created, descend upon this area to celebrate the Le Belle Macchine d'Italia, meaning 'The Beautiful Machines of Italy.' Throughout this peaceful mountainous region, the familiar high-pitched 'whine' of these finely tuned Italian cars can be heard from great distances as owners often explore their cars abilities through the many winding hills. Their first destination of the weekend was the grand historic Skytop Lodge where the Le Belle Concours and several other events were held. The climax of this Italian car celebration was the high-speed driving event at the Pocono Raceway, located just a short distance away.

The concours included several club reunions, and Regional and National Meets. The list includes Ferrari, Maserati, Iso Bizzarrini, Pantera, and Allante. As an added bonus, the event organizers often arrange for a special reunion or gathering of unique vehicles to heighten the allure. Last year, a pair of ItalDesign Aztecs were in attendance. Two years ago, the only three Maserati 8CTF vehicles ever created were on display, marking a historic reunion that had not occurred in decades. This year, the event celebrated the 50th Anniversary of the Maserati Birdcage concept. An example of each Tipo was on display, allowing visitors to admire the beauty, craftsmanship and evolution of the Series.

The Maserati Birdcage
The story of the Birdcage is one of creativity and ingenuity. Giulio Alfieri, Maserati's Chief Engineer, designed a new 2-liter racing car during the late 1950s. Though much of the car incorporated the traditional components and methods of other racing cars of the era, its frame was revolutionary. It was created by welding over 200 small steel tubes to form the frame's structure. The result was a frame that weighed less than 70 pounds and earned the car its name, the 'Birdcage.' The lightweight tubular frame and its superb handling and braking, gave unmatched performance for its time.

The first version of the Birdcage was the Tipo 60, followed by the Tipo 61 and culminating with the Tipo 65. Production lasted from 1959 through the early 1960s, with several significant structural, design, and mechanical changes along the way. Many consider the Birdcage to be the best front-engined, two-seater sports racing car ever created in large quantities.

Their ability to compete in many different racing classes and series is reflective in their diversity of powerplants ranging from four- to twelve-cylinders. These cars have been piloted by legendary drivers such as Stirling Moss, Dan Gurney, Caroll Shelby, Roger Penske, Jim Hall, and Briggs Cunningham on such prestigious circuits as LeMans, Sebring, Targa Florio, and Nurburgring.

Attracting non-stop attention throughout concours day, the five Maserati Birdcages assembled were easily the highlight and crowd favorite. Each example shown was, in many ways, vastly different from the next. The side-by-side comparison allowed for a greater appreciation and study than what could have been achieved in a solo exhibition.

Cadillac's Italian Heritage
If you are thinking to yourself, 'Cadillac's not an Italian marque!' Well, you are correct. Their Italian connection was a joint venture with the offices of Sergio Pininfarina in Turin, Italy during the early 1980s. Cadillac commissioned the legendary design studio to build a flagship car. The only requests were to preserve the trademark grill and emblem. The result was the Cadillac Allanté which was produced from September of 1986 until 1993.

Cadillac produced the rolling chassis, and then sent them to Italy for Pininfarina to finish. Three special Boeing 747s were customized to hold 56 Allantés. In total, the cars would make two trips over the Atlantic in these extravagant modes of transportation. Pininfarina installed the bodies and interiors, the sent them back to Detroit for final assembly of the drive train and other components. Once assembled, each car was test driven for 25 miles and then shipped to dealers in specially designed carriers.

The base price in 1986 was $50,000. That figure rose to $60,000 by 1993, the same year 4,670 examples were sold, marking the best year for the model. Even with these high sticker prices, Cadillac still lost money on each unit sold. By production's end, Cadillac had invested 24 billion on the Allanté.

This year's Le Belle Concours invited the Pininfarina designed Allanté to their event. The Allanté owners accepted and showed-up in vast numbers with several making the trip to Pocono Raceway a day later for high-speed laps around the track.

Conclusion
The 22nd Annual gathering of Italian Cars at Pocono and the Le Belle Macchine d'Italia had a mouth-watering assortment of Italian beauties from both past and present. The union of elegance and performance is a quality achieved on countless occasions by Italian automakers, and a history that can be revisited each year at this event.
Galleries
Gallery and Highlights
Alfa Romeo
Bizzarrini