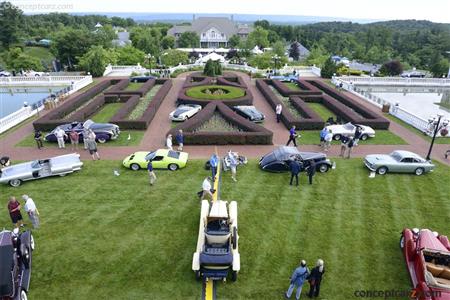 June 2019
From the Sweetest Place on Earth, the 9th annual Elegance at Hershey was held against the beautiful backdrop at the Hotel Hershey, welcoming a well curated selection of the world's most elegant vehicles. The three-day festivities commenced with The Grand Ascent, a vintage hill climb exhibition in the European tradition, where drivers piloted historic race care up the steep back road heading up to The Hotel Hershey. Cars & Coffee added to the celebration, followed by a gala themed night time party and fun-filled celebration for the benefit of the charities. The main event, The Elegance, is modeled after the finest concours in Europe and America. It is a genteel garden party featuring the world's finest collector cars, arrayed around the classically manicured gardens of the hotel. Unlike traditional Concours events, there are no classes, no groups, and no themes. The 49 judges perused the 75 vehicles, bestowing various awards, including the coveted Best of Show. Owners were asked to stay with their vehicles during judging, as several groups of judges may inspect their vehicles throughout the process. There are no class awards (as there are no classes); instead, there are Special, Corporate and Elegance Awards.

This year's Best of Show recipient was the 1933 Isotta-Fraschini Tipo 8A Sports Tourer with coachwork by Castagna and owned by Stephen Plaster of Missouri. It is the long survivor of two built, and Castagna's feature car at the 27th Salon de l'Automobile Paris in October 1933. The car was then put on display at Isotta-Fraschini's Manhattan showroom until sold to radio personality Joe Penner. While in the possession of George Schweiger, the car appeared in several movies, including Giant, driven throughout Texas by James Dean.
Galleries
Pre-War