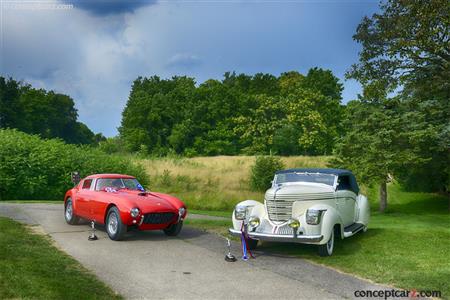 July 2019
The 41st Annual Concours d'Elegance displayed a diverse field of more than 300 spectacular contributions to automotive history on the lawn at the Inn at St. John's. This year's featured classes included Ferrari, Rolls-Royce, Bentley, the Rise and Fall of the Cadillac Fin, Woodies, Muscle Cars of 1969, and Drag Cars. John D. Groendyke was selected as this year's Collector of the Year, who rewarded visitors to the concours with 96 cylinders of Cadillac power from his personal collection....but only six cars. Each of the six cars on display had 16 cylinders! William 'Bill' Warner and Wayne Carini served as Grand Marshals - both individuals have had tremendous impacts on the collector car community and the preservation of automotive history.

This year's Best of Show 'Foreign' recipient was the 1954 Ferrari 375 Mille Miglia Berlinetta by Pininfarina owned by Fred and Sue Leydorf. This award was significant as it was for a post-War era automobile and a race car. Ferrari built fourteen open-body 'spider' examples, and six with a similar lower-body design. Only one of these Berlinetta's was intended for racing by the factory, while the others were for customer-racing. Power was provided by a 4.5-liter aluminum V-12 engine that was wrapped in an aluminum body shell. Most chassis components, except for the frame, fuel tank and radiator - were also constructed from aluminum. The Leydorf's car was the most luxurious of the 375 MM built, as it was fitted with some leather upholstery while the other five were all-vinyl. It has been owned by its current caretakers for over five decades.

The recipient of Best of Show 'American' was Ron Elenbaas and Bill Johnston for their 1938 Graham Model 97. This unusual car is one of a pair of supercharged Model 97 Grahams bodied by Saoutchik. Among its many unique features are parallel opening doors and a short, swept-back chrome-framed folding windscreen. It was ordered by Maurice Reb and was first shown at the 1938 Prix d'Avant-Garde at the Foire de Lyon in France. After World War II was was sold to an American Chrysler employee, from the French Army Service of Supply, and taken to Michigan. It was later traded among enthusiasts in Michigan until 1966, when it was sold by Morley Murphy to William Harrah for his Nevada museum. In 2015, it was shown at the Pebble Beach Concours d'Elegance, the first time the car had been shown since its debut in France.
Galleries
Rise and Fall of the Cadillac Fin