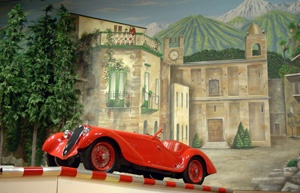 July 2008
The Simeone Foundation Museum, located in Philadelphia, PA is home to one of the greatest collection of automobiles in existence. The list includes the significant, the rare, and the accomplished. It traverses the evolution of the sports car, with emphasis on racing, from the early endeavors to the mid-1970's race winners. The floor layout is arranged as though each vehicle and display reinforces the next, telling the same story but in a different way. It showcases the most advanced cars of their era in historically correct, life-like dioramas and street scenes to establish a local context for the history of the automobile.

The museum is the personal collection of Dr. Fred Simeone, the former chief of neurosurgery at the Pennsylvania Hospital. The collection is based on the central theme 'The Spirit of Competition' and houses over 60 rare and significant sports cars chosen by Dr. Simeone for their significance in history and design.

Perhaps the hardest detail to comprehend is not the significance of each vehicle in the collection, but rather the consistency of the theme from beginning to end. Each sports car in the collection, except one, has lights, fenders and is capable of road usage. It is hard to imagine that a life time of collecting has been so devoted, focused, and unwavering.

The museum is subdivided into several groupings including Pre-World War I Racing, Bonneville Salt Flats, Hill Climb, Mille Miglia, Targa Florio, Sebring, LeMans, and several others. The focus is on 'racing', but there are several categories reserved for 'sports cars.' Within these categories are also the rare and seldom seen Paragons, such as the early 1930s Squire Roadster of which only seven examples would ever be created. Even within the 'Sports Car' category, the examples shown often stemmed from record holders or those that could outpace other vehicles on the roadway, such as the Mile-A-Minute Hudson or the Paige Daytona Speedster advertised as the 'World's Fastest Car.'

Racing
The most prestigious sports car race in the world is the 24 Hours of Le Mans. A victory on this circuit is the greatest honor a sports car can achieve. The Le Mans display at the Simeone Museum showcases 40 years of LeMans competition and provides visual reference of the evolution of the sports cars that raced during that period.

There were only a few early American competitors who battled at Le Mans. The Simeone collection honors those early attempts by Stutz, duPont, and later the Cunningham. Victory would elude American competitors until 1966 when the Ford Motor Company de-throned the legendary Ferrari marque for top honors. They proved it was not a phenomenon by repeating in 1967.

A single car makes up the 'America's First International Win' group. Prior to WWII, there were only a few American cars sent to Europe for competition. In the early 1920s, a Duesenberg competed at LeMans and won. The example on display is one of four cars which raced at LeMans in 1921 and is the only intact survivor. It is also the only car on display that is a race car and not a sports car.

The first International Race in the post-War United States was the Sebring 12-Hour endurance race. Alex Ulmann took an unused WWII training airfield and transformed it into a track suitable for hosting the greatest cars and drivers in the world. A pair of 1950's Jaguars make up this exhibit.

The Targa Florio began in 1960 in Sicily and was discontinued in 1977 due to safety concerns. The two cars in this display are separated in age by five decades which shows the dramatic evolution over the years.

The first Mille Miglia race occurred in 1927 through the streets of central Italy. It began in Brescia and proceeded to Rome then back to Brescia. It was a distance of 1000 miles over rough roads and tough terrain. It was an endurance race that tested the stamina, speed, and durability of both the driver and vehicle. Two Alfa Romeos from the 1930s are displayed in perhaps the most picturesque setting in the collection. One Alfa is positioned closer to the country-side setting, while the other is near the city.

Speed and Endurance
There are several displays in the museum that focus on endurance trials and speed record attempts. During early American automobile development, one test to determine reliability and performance was to traverse the great American expanse from coast-to-coast. The American Underslung model engaged in many of these early endurance trials and is considered the first US manufacturer to exclusively produce sports car. Fittingly, this is the first display visitors see upon entering the museum.

Timed trials, which tested the acceleration and speed of a car over a specific distance or period of time, were popular in England and a good benchmark for determining a vehicle's performance. A supercharged 4.5-liter Bentley, the fastest of all the great vintage Bentleys, makes up this display. The banked oval Brooklands Track provided another venue for cars to 'safely' achieve their top speed. A pair of Alfas make up this display. In the US, one of the safest and largest flat surfaces is the Bonneville Salt Flats. Cars from all over the world have come to set both speed and endurance records on the 10-mile circle. The highlight in this display is the iconic Shelby Cobra Daytona racer, of which only six were ever created. They beat the Ferrari GTOs to win the 1964 and 1965 World Championship of Makes and set numerous speed records at Bonneville. The example on display set 23 World Stock Car Speed and Endurance Records.

Circle of Winners
The museum is arranged with the final two categories being the 'Le Mans' and 'America at Le Mans' display; A fitting finale to this stunning collection. Except - they are not the final display. Turning away from the 'America at Le Mans' display and heading toward the exit, an Elysian display quickly unfolds. It is the 'Winners Circle', consisting of five cars, one for each of the major competing countries that were the actual winner in the races shown in the wreaths. It is a simple but profound setting. Five cars arranged in a semi-circle, with the one in the center on slightly raised pedestal. The background is a checkered-flag motif with five large wreaths suspended over each car. In the center of each wreath is the year and location for the victory of each corresponding car. Directly behind each car is a flag, representing its origin.

These vehicles are the zenith of design and engineering for their period. In the center is the prize of the collection, an Alfa Romeo 8C 2900 which won the 1938 Mille Miglia. It is Dr. Simeone's favorite, chosen for its design, elegance, performance, and accomplishment.

The final display in the museum is breath-taking, leaves one speechless, and takes a few minutes to fully regain one's composure. It is one of those moments in life where a smile forms even though there was no realization that it occurred. In your mind, you have run up to each car and examined them fully, but in reality your feet are still firmly planted. These are among the finest sports cars to ever traverse the road way and the fiercest to trade paint with the competition at the race track.

This 'Circle of Winners' display, along with the nearly 2 dozen other displays in the Simeone Foundation Museum, is one of the world's most discerning and premier collections in the world.
Galleries
America at LeMans 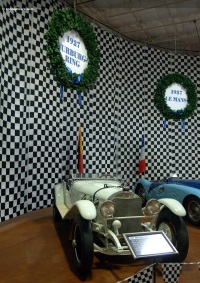