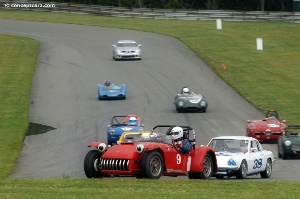 July 2008
The Pittsburgh Vintage Grand Prix is a multi-weekend event that has been in operation for over two-and-a-half decades. It is a ten day celebration packed with car shows, dinners, parades, races, and numerous other activities. It is the largest volunteer-based event in vintage racing and the longest running vintage race event in the nation, now celebrating its 26th consecutive year.

The next event in the 10-day celebration was the 4th Annual PVGP Historic Race at the BeaveRun MotorSports Complex track. The BeaveRun Historics is a welcomed compliment to the PVGP, as it provides a second racing venue which attracts an even wider audience of drivers and vehicles. Unlike the PVGP course, the BeaveRun circuit is very forgiving with sand traps and plenty of run-off areas. The PVGP is run through Schenley Park - and although every precaution has been taken to make the course as safe for drivers, spectators, and the cars - it is a public park and there are trees, barriers, and obstacles which could potentially do harm. With the BeaveRun circuit, risks are lower which occasionally fosters greater speeds and another variety of vehicles.

There were five groups of historic race cars sanctioned by the VRG which permitted any Vintage or Historic Race car through 1972. A sixth group was reserved for the BMW/Porsche Challenge, which welcomed all licensed BMW and Porsche Club Racers from the United States and Canada to participate.

A familiar friend made multiple appearances during the ten day celebration and was seen on several occasions throughout the BeaveRun practice, qualifying, and racing sessions. That friend was 'rain.' It was rather unfortunate as many drivers opted for the comfort of shelter rather than racing as the downpours soaked the track and made competition ever more difficult. The first group consisted of post-1960 production cars over 2.5-liters with many familiar names such as Mustang, Camaro, and Jaguar. The second group was reserved for pre-1960 Production cars under 2 Litres. Both of these groups avoided the rain though rain had fallen just prior to the start of the Group 1 race.

Group 3 was the BMW/Porsche Challenge and their session was not as lucky, as rain struck again. This was a very fast group and as would be expected, a few cars spun out as the track became saturated. One of those was the lead car which spun and narrowly missed another car. The driver later received an award for regaining control of the car after doing multiple donuts.

Group 4 was the pre-1960 over 2 Litres production car group which also had its share of excitement. Perhaps one of the most attractive and athletic vehicle on the course spun early during the race. It was the Vitesse 5 Sports Racer which was a purpose-built car constructed in the UK in the 1970s. Its low profile, wide stance, and aerodynamic body gave it a great advantage as it traversed the challenging BeaveRun circuit. Its hopes for victory were short-lived as it spun off-course and onto the grass. Veteran Tivvy Shenton in the Jaguar XK140 'threw caution to the wind' and raced aggressively through all corners. On several occasions the back-end nearly overtook the front end, which is nothing new for Tivvy. That is how he races, sliding through corners and frequently crossing the finish line in first place.

Group five was the formula racers group and again saw several off-course adventures. Turn 10 claimed another victim - no damage was done but the slippery grass cradled the car for the remainder of the race.

The final group was the post 1960 1.6-2.5 Litre Production cars. Though weather conditions were still less-than-ideal, they did have the driest track of the day and had a very exciting race. The favorite in this group was Tom Grudovich in the Elva Mk 7. Sharing a similar profile to the Vitesse 5 Sports Racer coupled with the experience of Grudovich, the car appeared to glide effortlessly from one end of the track to the other.

As the races came to a close, thoughts quickly turned towards the numerous car shows that were to come in the days to follow. Though the PVGP has been around for 26 years, the BeaveRun Historics is still very young. Still, it has become a much anticipated event for drivers and spectators offering exciting racing and a great variety of vintage automobiles.
Galleries
Ground Pounders & Sports 2000