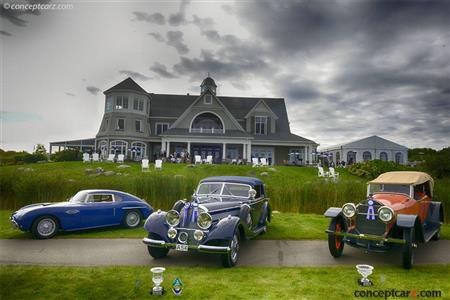 September 2019
The 7th annual Cobble Beach Concours d'Elegance was held near Owen Sound in the Township of Georgian Bluffs at the Cobble Beach Waterfront Golf Resort Community in Canada. It is a luxury four-season resort nestled on 574 acres with an 18 hole links style golf course designed by Doug Carrick. Guests to the concours passed by a Nantucket-style clubhouse as they proceeded onto the concours lawn. The very luscious and well-manicured golf course lawn was damp, as it had rained for a few of the early morning hours. The rest of the day was delightful. The show field provided ample space for the hand-selected classic and vintage vehicles which were carefully arranged into 19 different classes. Each class housed either 4 or 8 vehicles which were judged against other vehicles in their class by a panel of 48 judges. Each class winner was eligible for one of either the Best of Show, the Most Outstanding Pre or Post War awards. This year's special classes included Microcars, GM Motorama, and Corvair Concepts.

The 'Baby Birds' class housed the first generation of Ford Thunderbirds. Introduced at the Detroit Auto Show on February 20th, 1954, the 'personal car' remained in production 1957. During its introductory year, 16,155 examples were sold and over the three year production run, sales exceeded 53,000. The examples at Cobble Beach included at least one example from every year, including a 1957 E-Code (known as the 'E-Bird') which has the 313 cubic-inch V8 with two four-barrel carburetors, an aluminum intake, and 270 horsepower. The car, owned by Janice Schmidt of Walkerton, ON, was awarded 1st in class.

Among the Microcars, the Messerschmitt KR201 Roadster owned by Jim Garbo of Ranksville, WI was awarded 1st in Class. Approximately 40,000 examples of the Messerschmitt KR200 were built, while the KR201 was much more rare, having the lowest-production production numbers of the Messerschmitts. Produced between 1957 and 1958, just 304 examples were built. Along with being a very rare example, the Garbo's vehicle was possibly the lowest-mileage KR 201 roadsters known, with only 2,720 original miles. This 1st in Class victory was an impressive accomplishment considering the well-curated class, that included a Rolux baby VB61, a Hudson Metropolitan (Nash Metropolitans are more common - the Hudson nameplate is rare), the Heinkel Kabine, Vespa 400, and a Goggomobil TS-300.

Another impressive class was the GM Motorama Cars from 1953. It was impressive because it told the story of GM Motorama Cars of 1953 (that included the 1953 Oldsmobile Fiesta, the 1953 Buick Skylark, and the 1953 Cadillac Eldorado) and that it was from a single collection of Brent and Connie Erickson. All three cars were finished in the rare color of black. Of the three, the rarest was the Oldsmobile Fiesta which had just 458 examples built. The only Fiesta example finished in Black Code 99 Fiesta was the car on the display field.

The Outstanding Pre-War Trophy was awarded to John and Mary McAlpin for their 1917 Locomobile 48 TYPE M Series 7. The Locomobile Company of Bridgeport, Connecticut built some of the finest automobiles during the first part of the twentieth century. Unlike most companies that built cars in all price ranges, the Locomobile Company produced only high-priced luxury cars. Interestingly, the company garnered much of its earliest publicity from racing. In 1908, a specially built racecar, which would become known as Old 16, was the first American racecar to win the prestigious Vanderbilt Cup Race.

Most Locomobiles were touring cars and limousines, however a few Locomobiles were fitted with sportier roadster and speedster bodies. Locomobile was perhaps most famous for the sportif design, considered to be the first dual-cowl phaeton. The Model 48 was introduced in 1911, and endured as long as the company produced automobiles. Prices originally began at $4,800 and increased to $9,600 by the end of production. Locomobile became a part of Billy Durant's empire in 1922, building its final car in 1929.

The McAlpin's Locomobile is finished in Pacific Coral with Deep Slate Blue Gray body and fenders. It is powered by a 550 cubic-inches, 82 horsepower 6-cylinder engine and is one of three known to survive. It was designed by J. Frank deCausse and built at Farnham-Nelson Wagon Works of Brookline, Massachusetts. This car is believed to have been built for the Leggett Family (of Rexall Drug Frame) and was delivered to their estate in Newport, Rhode Island. The exterior colors of the Locomobile match those used on Rexall Drug signs.

The Outstanding Post-war award went to the 1954 Siata 200CS owned by Walter Eisenstark. The 200 and 208 models were produced from 1952-1954 and came about largely because Siata was able to buy 2.0-liter V-8 powertrains from Fiat (which built another 114 for its own short-lived and ill-fated sports car, the Otto Vu). Mr. Eisenstark's car is one of only 18 Siata coupes powered by the 1996cc Fiat 8V engine capable of producing 110 horsepower. It is one of only 11 bodied by Balbo. It was imported into the United States and arrived in New York in 1952. After a few owners, several of whom raced it in SCCA events, it came into the care of the current owner's father in 1959 and has remained in the family ever since. On June 8, 2017 the car was being road tested by a technician when it was hit from behind by a driver who was texting. Damage was extensive. In the ensuing nine months the car was given a total restoration. During that time, the red exterior was found to be incorrect, and it was repainted in its current blue livery.

Everyone agreed that the 1938 Mercedes-Benz 540K Cabriolet owned by Robert S. Jepson, Jr. was the most elegant vehicle on the field. It won the People's Choice award and Best of Show. This was the second year Mr. Jepson won the coveted Best of Show, winning last year with his Delahaye 135MS.

Between 1936 and 1940 Mercedes-Benz turned out 419 540K chassis before World War II intervened. Most were swathed in one of 11 standard body designs from Mercedes-Benz's in-house coachworks in Sindelfingen. A handful were bodied by outside coachbuilders, including Mr. Jepson's Swedish example by Norrmalm, designed by Johan Oscar Olbager, the firm's chief of design. Just three cars are known to exist with Norrmalm coachwork.

The chassis was delivered to Max Gumpel in Stockholm on September 30, 1937. Gumpel had the car fitted with two batteries and an oversized fuel tank for extended travel, along with Marchal headlights, spotlight and running lights. His most prominent personalization was the oversized goddess Diana mascot. Legend has it that Gumpel was a close personal friend of Greta Garbo and that she frequently rode with him in this car.

The three-day event featured a Saturday Cars & Coffee event, a tour through the surrounding countryside, lectures, art and automobilia, and Hagerty ride and drives. Proceeds from the event help support the Sunnybrook Foundation Garry Hurvitz Brain Sciences Centers and the Owen Sound Regional Hospital Foundation fund. Over the past six years, the Concours has raised over $440,000 for these charities.
Galleries
Horseless Carriage