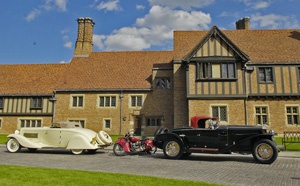 August 2008
The Meadow Brook Concours d'Elegance is one of the premier concours's in the world as a result of its ability to attract top judges and top collectors. The result is a show field that does not disappoint with some of the finest and best prepared motorcars in the world. It guarantees that each vehicle in each class will be thoroughly analyzed and expertly critiqued by the judges with the paragon of the group placed appropriately on a pedestal amongst its peers. At the end of the day when the Best of Show is announced, one can rest assured that the vehicle chosen is most deserving.

The 30th Annual Meadow Brook Concours d'Elegance showcased over 230 brilliant classic cars and motorcycles, plus 50 brand new vehicles including the newly introduced Saleen S5S Raptor Concept, Ferrari's, Maseratis, a Bugatti Veyron, and a freshly built Lamborghini Reventón. The Reventón had just arrived in the US only a few days prior to the event and is the 12th of 20 to be produced and certainly was one of the highlights and surprises of the concours. Another spectacular creation that was making a debut was the Alfa Romeo BAT 11 which borrowed many classic design cues of the original BAT cars. On the concours lawn the lists included significant Ferraris, 16-cylinder cars, 8-Liter Bentleys, a salute to General Motors' 100th Anniversary, and a dizzying array of histories finest.

This year saw attendance figures reach levels not seen in more than a decade, with over 12,000 visitors strolling the concours lawn. Equally impressive were the number of top collectors who brought their prized possessions to one of America's greatest castles, Meadow Brook Hall. Since the first Meadow Brook Concours, held in 1979, funds generated through the concours have reached nearly $6 million which have been used to preserve historic Meadow Brook Hall, an important part of Oakland County's rich heritage.

Class of 1933
1933 was a big year. It was the year construction began on the Golden Gate Bridge in San Francisco Bay, Mount Rushmore National Memorial was dedicated and president Franklin Delano Roosevelt addresses the nation for the first time as President of the United States. Under his leadership, the New Deal was formed (in response to the Great Depression) which provided relief for unemployed, recovery of the economy, and reform of the economic and banking systems.

The Great Depression still had a strong grip on the economy - by this point in history, depositors had lost $140 billion in deposits - resulting in a decrease in production by most automakers in response to declining sales. Some marque's moved 'downmarket' to attract a new breed of clientele and rejuvenate sales, while others merely reduced prices, increased the number of options offered as standard equipment, and attempted a slew of other tactics to avoid receivership.

Even though the economy was in turmoil, it did inspire some of the greatest luxury automobiles of all times. Creativity and originality were brought to new levels, as survival of the fittest introduced new designs and build quality.

The Meadow Brook category 'Class of 1933' showcased many alluring examples from automakers such as Auburn, Packard, Pierce-Arrow, Franklin, Chrysler, and Nash. Most of the examples on display had convertible tops, side mounted tires, streamlined design, and either eight- or twelve-cylinder engines. Most were produced in limited figures, such as the Auburn Twelve-161 Sedan Phaeton which saw only 41 examples produced, all having a base price of $1,495. The Lycoming 12-cylinder engine was also unique for a car of this price range. Around 200 examples of the V-12 Franklins were produced before their career as an automaker came to an end, in 1934. The Nash marque would make it into the post-War era despite their minuscule production of 14,973 for 1933. Their persistence paid off, as production rose to 85,949 a few years later, in 1937.

In many respects, 1933 was a year of desperation and the catalyst for a new and modern era of design and ingenuity. The arrangement of 1933 vehicles at Meadow Brook was a fitting diorama for this pivotal point in history.

The 8-Liter Bentley
The 8-Litre was the largest and most luxurious Bentley car made prior to the purchase of the marque by Rolls-Royce. It used a massive 8-litre straight-6 engine and rode on a long 144 inch or longer 156-inch wheelbase, making it the largest car produced in the United Kingdom up to that time. The 8-Litre was as advanced as any existing Rolls-Royce, and was faster than any Rolls-Royce built before World War II. Just as the Great Depression was starting to affect Europe, Bentley unveiled the 8-Litre (its finest and most expensive model) at the 1930 London Auto Show.

Only 100 examples of the 8-Liter Bentley's were produced with many still in existence in modern times. Their low production numbers made the six examples on display at the Meadow Brook Concours even more special. The variety of bodystyles and coachwork gave much to examine and explore.

Performance
Several categories were reserved for the performance minded vehicles including Drag Cars, American muscle, and Sports Cars. There were several gems within each group, including the Shelby Mustang GT500KR with its 428 Cobra Jet engine, Plymouth Road Runner, and the Chevy Camaro L88 427 COPO ZL-1 (to name a few). Only 69 examples of the ZL-1 Camaro's were produced and each had a Corvette L88 427 with weight-saving cast-aluminum block. A short distance away on the show field was another L88 powered vehicle - the Corvette. To many, it is the ultimate production Corvette and just barely street-legal. Only 80 examples of the L88 Corvette were created.

Two-seater roadsters such as the aluminum bodied Jaguar XK120, a very rare Derby L8, and the sensual Nash-Healey PF were a few examples that made up the 'Sports Cars Thru 1955' category. The 'post 1956 Sports Cars' were mostly coupes with a varying array of designs, such as the curveacous Maserati A6G/54 2000 Zagato and Mercedes-Benz 300SL Gullwing, to the wedged-shaped air-piercing designs of the Lamborghini Miura, Bizzarrini 5300, Maserati Ghibli, and the Lamborghini Countach.

The variety in each group told stories of different interpretations and attempts at achieving beauty and performance.

The General
It is hard to imagine but General Motors turns 100 this year. To honor their many contributions, several categories were reserved to display their legacy. The 'GM The Early Years' category included Buick, Cadillac, Oldsmobile, Scripps-Booth, and Chevrolet vehicles from the late 1900s to 1927. Perhaps the most impressive vehicle in the group was the Oldsmobile Limited. Only ten of the approximately 1,000 Olds Limiteds ever built are known to have survived. They were powered by a 707 cubic-inch, 6-cylinder, T-head engine and rode on tires that measured 42x5. They were so large that dual-step running boards were required. At a price of $5,000, they were as expensive as they were massive. The Scripps-Booth Company produced vehicles from 1912 through 1917 before becoming apart of the Chevrolet model. The Model C on display was one of the few remaining examples in existence. It is owned by James Scripps Booth's grandson and his wife.

Legendary designer Harley Earl was selected to lead the newly formed 'Art and Color' section for GM in 1927. This combination would catapult General Motors to design leader of the auto industry for the many years to come. Early examples of the 'Art and Color' department included the short-lived LaSalle brand, Oakland, Oldsmobile, Chevrolet and Buick.

The 'GM Streamliners' and 'GM Jet Age' categories showcased design styles that were common to the GM line-up at different points in history. The 'GM Streamliners' category focused on mid-1930s to late 1940 vehicles that were thoroughly modern and took advantage of aerodynamic principles to shape the vehicles into designs that would glide through the air. The 'GM Jet Age' of the 1950s percolated into flamboyant designs with tail fins and turbine shaped wheel covers. This era was inspired by the space program and futuristic spaceflight.

Best of Show
Meadow Brook awards three Best of Show. In the vehicle categories, one is awarded for imports and the other for domestic vehicles. The third award is bestowed on the most deserving motorcycle in attendance.

In the vehicle category, there were many suitable contenders, including last years Pebble Beach winner and this years Amelia Island Concours winner. The Amelia winner had also been shown at Pebble Beach in 2007, but it was not chosen as the winner. To be fair, it was an 'Exhibit Only' entry, as were 11 of the other 18 entries in its class. So the Meadow Brook Concours was an opportunity for the Pebble and Amelia winners to go head-to-head for top honors. So who won? Well, they both did. The Pebble Beach Concours winner (the Duesenberg Special SJ Mormon Meteor) was chosen by the people as their favorite. The judges chose the Amelia winner (the Bohman & Schwartz bodied Model J Duesenberg owned by Sam and Emily Mann) as their favorite and the 'Best of Show.'

Best of Show in the European category was awarded to an Isotta Fraschin Tipo 8A owned by Joseph and Margie Cassini, III. The car has a high performance 8A S chassis; American coachbuilders LeBaron and Fleetwood were tasked with designing and creating the roadster coachwork. Upon its completion, the car was exhibited at the Isotta Motors Showroom in New York.

Best of Show Motorcycle was awarded to the 1940 Indian 4 Cylinder owned by Berland Sullivan.

Conclusion
For three decades the Meadow Brook Hall has continued to grow and build upon its quest to exhibit automotive design, craftsmanship and history. From the classic and vintage motorcars to modern supers, from concept to production, the Annual Meadow Brook Concours d'Elegance was a very memorable event, proving once again that it is one of the premier concours's in the world.
Galleries
8 Litre Bentley 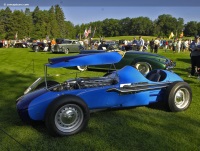