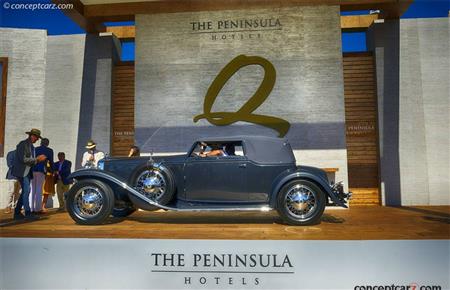 August 2019
The Quail, A Motorsports Gathering combines a lush setting on a golf course nestled against the Santa Lucia mountain range with exceptional cuisine and some of the finest examples of vintage sporting automobiles ever to meet the road. This year's featured themes included the 100 Years of Bentley motors, the 25th Anniversary of the McLaren F1, and a Tribute to the Electric Car Movement.

This year's recipient of Best of Show honors was Judge Joseph & Margie Cassini for their Stutz Model DV-32 Convertible Victoria. Its coachwork is by LeBaron and believed to have been a proposed 'catalog custom' intended to maintain LeBaron's position as the dominant producer of bodies for use on Stutz chassis. The relationship between Stutz and LeBaron dated back to 1927, with LeBaron's development of a lightweight roadster body known as the Blackhawk Speedster. The Cassini's car has a radically raked and shortened folding windshield design, and it features the longest Stutz hood, lengthened by more than 6-inches with a set-back firewall. It was originally imported to Argentina for Stutz distributor Luis Angel Firpo. In 1974 it was sold to a collector in Florida who kept it for several years before selling it to a gentleman in Ohio. The present owners were able to acquire it in 2008 and have given it a full restoration.

100 Years of Bentley Motors
The Bentley marque is a six-time winner in the grueling 24 Hours of Le Mans race and one of the most revered car brands in existence. Among the list of legendary models are the 4.5-liter 'Blower' and the R-Type Continental, and modern classics such as the Mulsanne and Continental GT. Introduced in 2015, the Bentayga was the world's first luxury SUV and conquered some of the world's most inhospitable environments with ease. In June of 2018, the Bentayga completed the Pikes Peak course in 10:49.9, breaking the record by nearly two minutes.

The Quail, A Motorsport Gathering celebrated the legacy of Bentley by displaying many of the models from the company's illustrious past. The list included the 3-liter, 4 1/4-liter, 4 1/2-liter, Speed Six, Continental, Turbo R, Azure, and Continental GT V8. The all-new Flying Spur was joined by the EXP 100 GT concept car which was making its U.S. debut. With the EXP 100 GT, Bentley has reimagined the idea of Grand Touring for the future. It displays the future of luxury craftsmanship with a seamless fusion of materials and the intelligent curation of technology.

Combined with other activities on the Monterey peninsula, Bentley showcased the evolution of the marque since 1919, while illustrations of Bentley's past, present, and future highlight the brand's power heading into the next 100 years.

The McLaren F1
Perhaps one of the finest gatherings of McLaren F1 vehicles in the modern era, The Quail: A Motorsport Gathering display included the F1, F1 LM, and the F1 GTR Longtail. The McLaren Company is currently one of the world's premier supercar (hypercar) builders and one of the most respected automobile manufacturers in the world. The vehicle responsible for its success was the McLaren F1, which made its debut in 1994. It used a state-of-the-art carbon fiber chassis and powered by a naturally aspirated V-12 engine from BMW. Its performance credentials in 1994 were undisputed and still capable of rivaling many of today's best supercars. Between 1994 and 1998, McLaren built 106 examples of the F1 in both road and race trim. The cars curated by The Quail highlighted the evolution of the McLaren F1 during its brief four-year run.

Pagani and Koenigsegg
What has become a regular appearance - is anything but regular. Two of the greatest manufacturers of hypercars in the modern era are from Horacio Pagani and Christian von Koenigsegg. Both companies have pushed the boundaries of design and technology well beyond the limits, finding new horizons and an elite and exclusive following along the way. They are incredibly precise and exquisitely crafted, but terrifying. Sophisticated, elegant, gorgeous, sinister, and aggressive. They are, perhaps, the ultimate expression of performance, luxury, and exclusivity. To witness one is a rarity. To see about a dozen of them - one must visit The Quail.

Concept Cars and Custom Coachwork
Bentley displayed its mesmerizing Bentley EXP 100 GT Concept and Pininfarina showcased its revolutionary Battista, the world's first luxury electric hyper-performance GT. It is the first solely Pininfarina-badged car and was designed and built in Italy. Faster than a current Formula 1 race car in its 0 -100 km/h sub-two second sprint, and with 1,900 hp and 2,300 Nm torque on tap, the Battista combines extreme engineering and technology in a zero-emissions package.

The Vivant 77 Prototype on display hailed from the mid-1960 era and its design was inspired by the three Alfa Romeo B.A.T. prototype coupes. The lightweight roadster body was hand-formed by a trio of European panel beaters over Herb Adam's own space-frame chassis. Mr. Adams is legendary among Pontiac and GM performance enthusiasts and was instrumental in the development of the Pontiac Trans Am cars and the Super Duty engines. Pontiac cues were deliberately incorporated into the design of the Vivant 77 Prototype as well as many Pontiac mechanical components, including the 370 cubic-inch V8, which is one of a limited run of engines assembled as part of Pontiac's horsepower development program.

2019 - The Quail : A Motorsport Gathering
The Quail represented Monterey Car Week with a stunning and spectacular array of automobiles, showcasing some of the greatest creations ever built, from old race cars to the latest concepts, and new hypercars. The outdoor garden party hosts a Fireside Chat, and this year's featured guest was Mark Webber, winning Formula 1 driver and 2015 WEC champion moderated by Philip Kadoorie. The other celebrity guest was Alex Hirschi, aka Supercar Blondie, moderated by journalist Hannah Elliott.

The automotive show field is complemented by some of the finest gourmet meals found on the Monterey Peninsula. Six different cuisines with amazing dishes and drinks enchanted the senes, from the alluring presentations to the palate. The flavors took on depth, context, and a sense of place, perfectly complemented by the relaxing atmosphere and finely crafted works of automotive art. Nestled within the hills of Carmel, The Quail, A Motorsport Gathering remains one of the finest and memorable automotive events on the enthusiasts calendars.
Galleries
100 Years of Bentley Motors