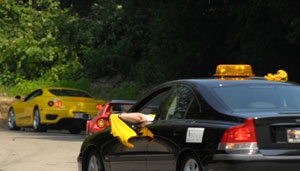 September 2008
This is the only vintage race in America held entirely on city streets. It is an event that has a long and proud history with nearly three decades under its belt. This year began with a slight technical glitch and rain delay. As the Star Spangled Banner began playing over the loud-speakers, the audio cut out. The tune was carried to its completion by the course workers and PVGP officials picking up where the music left off. This was followed by a tribute to the late Myron Cope, one of the founders of the event, and then by rain. The event was not a total wash, as the first three groups ran the course before the rain began, and the final three groups were able to wait-out the hour-long rain delay.

The Race
The first of the six groups on the course was the Pre-War category. Ben Bragg in the Reuter V8 Special led early, but would finish in second after loosing a cylinder and a few spark plugs. Frank Mount in an MG TB would take top honors; he has finished in second place for the past two years.

The Group 2 'Under One Liter' race was won by Norman Berke in an Elva Courier. Second went to James Lyles in a Cooper MK8 followed by Elad Shraga in an Abarth 207A.

Group 3, the Formula Juniors & Sports Racers, was a very full group with over 30 vehicles on the grid. Around half of the entries were Lotus's, including such memorable models as the Lotus 7, 11, 18, and 22. The Lotus marque claimed nine of the top 10 places along with the coveted top three spots. Christian Moric, in a Lotus 22, started from pole position, but was unable to fend off Dick Fryberger's Lotus 11 for the checkered flag.

After three races had been run, things came to a temporary halt as high winds and heavy rain had everyone running for cover. After more than an hour, the racing resumed even though many of the racers had packed up and left. Over half of the Group 4 'Under Two Liter' cars declined to run through the wet conditions. A trio of MG TD's claimed the first three positions, with PVGP veteran Manley Ford in the lead.

Next on the course was the Group 5 'Over 2-Liter' cars, though they too had to battle rain. The final race of the day was the Small Bore through 1965, Modified & H-Production. When the checkered flag fell for the final time of the day, Bob Colaizzi in his Lotus Super 7 was in the lead. Though the rain had subsided and the course was fairly dry, he opted to run with rain tires which were to his advantage. Another advantage was that over half of the cars had packed up and left once the rain had started.

Spotlight on the Vehicles
There are many faithful racers that compete at the PVGP, and have been for many years. At least 15 drivers have been part of the Grand Prix for 26 years. Rivalries exist among the ranks and their efforts are always enjoyable to watch. Even as exciting are the newcomers to the race. These are the unknowns and how they will perform is a complete mystery. Perhaps one the most thrilling vehicles to run the course was also the oldest: it was the 1912 Mercedes Benz Race Car. It has a 1914 Grand Prix Mercedes style body which was fitted during its 6-year restoration in England. The car was completed just last year and made its restoration debut at the Amelia Island Concours. Mounted under the long nose is a Hall-Scott Aero engine. It has four-cylinders and displaces a massive 9.5-liters. Being the oldest, with many of the cars having a full two decades of improvements to rely on, the Mercedes ran near the back of the pack. It finished in 14th place in the Pre-War category, but considering its age, it was very impressive. Another extraordinary entry in the Pre-War category was the Maserati 8C 3000/M. It is believed that the legendary racer Tazio Nuvolari raced it in the Belgian Grand Prix at Spa in 1933. There were several incredible entries in the 'Small Bore thru 1965, Modified, and H-Production' Category. Among them was the Maserati Tipo 151/3 driven by Dr. Charles Schwimer of Pittsburgh, PA. There were only three Tipo 151's created and only one exists in modern times. The car that ran the course at the PVGP was not an original, but a brilliant tribute to Maserati's attempt at winning the 24 Hours of LeMans. As it ran the grueling course, it was obvious that its talents were better reserved for the high speed circuit at LeMans, specifically the Mulsanne Straight. The sharp corners and steep hills had this curvaceous Maserati comfortably in the middle of the pack. The Aston Martin DB4 Series was produced from 1958 through 1963 with just over 1,000 examples produced. One was brought to this years' PVGP and it looked very fast during practice and qualifying. Also running the Group 6 category was the Alfa Romeo GTA originally driven by Horst Kwech in the 1970 Trans-Am Sedan Series under 2-liter (U-2) category. It won the U-2 class in 1970 and its speed was very evident on the PVGP course.

Celebration
The late Myron Cope, a Pittsburgh Sport Caster and icon of the Pittsburgh community, was the co-founded of the PVGP 26 years ago. Even after all that time, the event still benefits Myron's two favorite charities, the Autism Society of Pittsburgh and Allegheny County Schools. In memory of Myron, a special ceremony took place, including a parade around the Grand Prix Course and a towel spinning tribute 'Terrible Towel' (another Pittsburgh tradition started by Cope). In attendance were parade Grand Marshal & Pittsburgh Mayor, Luke Ravenstall along with Steelers including Jeff Hardings and Myrons Copes' daughter, Elizabeth.

Each year the event highlights a marque (meaning manufacturer). This year the event honored a country - Italy. Included in this celebration were Ferrari, Maserati, Alfa Romeo, Fiat, Lamborghini, and Lancia.

Conclusion
Rain sidelined many of the cars in Groups 4-6 and thinned out the spectators who came to watch this annual event. Sad, but not entirely unexpected, as the rain has been a frequent visitor throughout the years to the Pittsburgh Vintage Grand Prix. It has become a tradition and one that race officials, and the more than 1,200 passionate volunteers, know how to battle. All six groups were able to run and the spectators who chose to battle the elements were treated to some thrilling, hard-fought racing. The 2.33 mile course with its 23 turns, walls, bends, and some very off-camber turns provided plenty of entertainment for drivers and spectators.

This year's event was a sensational salute to the late broadcaster Myron Cope, a great tribute to the Italian automobiles, and plenty of racing and classic car shows for the car enthusiast. Proceeds benefit charities, with more than $2.25 million donated to the Autism Society of Pittsburgh and the Allegheny Valley School since the event's inception.
Galleries
Group 1