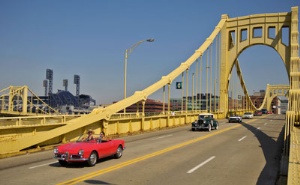 September 2008
The first Pittsburgh Vintage Grand Prix (PVGP) race was in 1983. Since that time, the Grand Prix has expanded into a ten day celebration of cars shows, two races, autocross, gala's, parades, car cruises, and more. These extra events serve several purposes with perhaps the most important being to raise awareness about the Grand Prix and to raise funds for the charities.

Each year the PVGP honors a marque, a French word for manufacturer. This year, things were slightly different; instead of selecting just one manufacturer, organizers selected Italian Cars. The list of cars born in Italy include such memorable names as Maserati, Ferrari, Lamborghini, Fiat, Alfa Romeo, and Lancia. At several of the car shows throughout the week, the 'Italian Marques' were grouped together and given the prime real estate on the show field.

This year, the first event of the celebration was a kick-off rally followed by racing and autocross events at BeaveRun Motorsports Complex. A Black-Tie Gala was next on the agenda followed by several days of car shows. The Walnut Street Car Show, the first of the many car shows to transpire, was the most exclusive of these gatherings as the cars on display were by invitation-only. It was held on Walnut Street in Shadyside, PA in the heart of Pittsburgh's East End. The neighborhood is residential with boutiques, shops, restaurants, and lounges. The show featured a vast array of classics, customs, exotics, street rods, and supercars.

The following day was the Car Cruise at the Waterfront. This was one of the larger and more relaxed gatherings as there were no assigned parking and no judging. Several hundred cars (over 500) converged on the historic Homstead area and were corralled into a segregated portion of the vast shopping plazas. Many of the vehicles on display were some of Detroit's finest from the 50s-70s era. Hot Rods and European sports cars were also commonly found amongst the vast rows.

The Downtown Race Car Parade & Display occurred the following day. There were three groups of cars and each were lead through the Pittsburgh streets by a police escort. The first group was brought to the US Steel Building where the cars were positioned in place for the afternoon lunch crowd to enjoy. At the same time, another group was led to PPG Place while the third group was led to Point State Park. A few hours later a special happy hour was held at the Bossa Nova Restaurant in down-town Pittsburgh. Several rare exotics were positioned near the entrance to the restaurant, offering an easy entrance into conversation with fellow patrons.

The largest car show was also the last car show of the celebration. It was held on the same day as the Grand Prix practice sessions in Schenley Park. Thousands of cars descend upon the very hilly golf course with each grouped in categories such as German, American, and British. Within these groups the cars were carefully arranged by manufacturer, year and model. It is a daunting task to visit the plethora of cars on the never-ending show field, but it is one Pittsburghers and automotive enthusiasts look-forward to every year.
Galleries
Parade through Pittsburgh