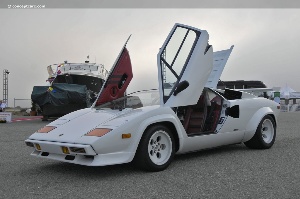 September 2008
The 23rd Annual Concorso Italiano showcased some of Italy's finest and exciting automobiles, such as Ferrari, Lamborghini, Maserati, Fiat, and Lancia. This year's event celebrated 45 years of Lamborghini, 40 years of the Ferrari 365 GTB/4 Daytona, and the creations of designer Marcello Gandini.

Organizers went looking for a new venue for their event after learning that the on-going hotel and golf course construction at Bayonet Black Horse would restrict the space required to hold the event. Many locations were examined on the Monterey Peninsula before selecting the Marina California Airport as the new location. It is located a mere 10 miles north of Monterey and was well suited for the low-to-the-ground exotics. In years past, it was not uncommon for the cars to get stuck while traveling to-or-from the show field. The terrain often made it difficult for the wide, low-profile tires to get grip, often failing to find traction on the grass and muddy paths. This year, the cars were treated to flat and paved surfaces on the expansive runways making it easy for cars to travel in and out. There was plenty of parking for spectators, ample room for the vendors, and endless terrain in which to expand. Though the terrain was ideal for driving and parking, it was flat, had no rolling fairways, no towering pines, and was not as scenic as in the past. The openness allowed for higher winds, cooler temperatures and some grumbling amongst show-goers.

Though it was a new venue, the popular aspects of the show were retained such as the fashion show, the on-stage commentary with owners and celebrities, music, Riva yacht displays, and the festive atmosphere. Vintage aircrafts and professionally-catered food and beverages were added this year for the first time at Concorso.

Marcello Gandini
In 1965, Bertone hired Marcello Gandini as Chief Designer and replacement for the departing Giorgetto Giugiaro. His designs would become some of Lamborghini's most memorable vehicles such as the Miura, Espada, Marzal, Jarama, Urraco, Countach and Diablo. His work was not solely reserved for Lamborghini; his resume includes such memorable names as the Alfa Romeo Montreal, Alfa Romeo Carabo, BMW 5 Series, Bugatti EB110, DeTomaso Pantera 200, Cizeta Moroder V16T, Citroen BX, ISO Lele, Fiat X1/9, and Fiat 132 (among many more).

Ferrari 365 GTB/4 Daytona
When introduced, many believed the car would be called the 'Daytona' in recognition of Ferrari's top three wins at the 24-Hour 1967 race, but instead, the Maranello factory kept with their traditional naming scheme. Though not official, the name 'Daytona' would stick with the car. The design was created by the legendary Pininfarina design studio and featured a front-engined configuration and a design that was a departure from the traditional rounded looking GTs of the company's past. Production would continue until 1974 with nearly 1400 Berlinetta examples being produced.

Best of Show
Best of Show honors was awarded to the 1967 Lamborghini 400 GT 2+2 owned by Jorge Bujazan or Baja, CA. The 400GT was the first car totally designed and built by Lamborghini. Only a handful of two-seaters were built before they were replaced by the 400 GT 2+2. The two-plus-two configuration made the supercar a little more practical, allowing room for additional occupants in the rear seats. During its two year production period, the 2+2 outsold the two seater almost two-to-one. It had a U.S. list price of $14,750, and, at 242 sold, was one of Lamborghini's more popular models.

The Herculean job of selecting the 'Best of the Best' was reserved for a team of judges under the direction of the Chief Judge, Gary Bobileff. Bobileff's experience with Italian cars spans over twenty years and has earned him a reputation as one of the most respected and knowledgeable experts in the restoration and judging of Ferraris in the country.

The Modern Exotics
Amongst the many modern exotics was an Enzo Ferrari, Bugatti Veyron, Gemballa Ferrari, Gumpert, Maserati MC12, Lamborghini Gallardo, Lamborghini Murciélago , and Ferrari F430 (to name but a few). Perhaps the most exciting was the ultra-exclusive Bugatti Veyron Pur Sang edition clothed in an extremely pure aluminum alloy with no paint. Meaning 'pure blood' or 'thoroughbred', the Pur Sang harkens back to Bugatti's heritage as a racing marque. Only five examples will be produced.

Conclusion
Concorso has always been focused on Italian cars, though planes and other vehicles were welcome. The list of 'other' marques at this years show included BMW, Rolls-Royce, Porsche, Chevy Corvette, and Lotus.

The new venue allows for the event to grow and to accommodate a growing group of automotive enthusiasts. Though the scenery was a little bland, the airplanes were a pleasant backdrop and a welcomed addition to the event.